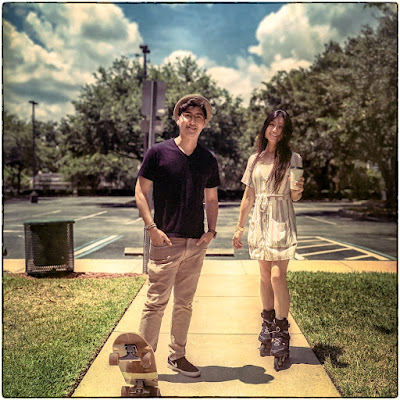 Look at me, taking photographs of people!  These are my new friends.  Well, they aren't, but they could be.  They were, as the kids say, the sweetest people ev-er!

I was not feeling well yesterday and thought I would be lying about the house watching t.v. all day.  But I wasn't that sick, and I had a lot of film I wanted to try experimenting on.  I still had two shots left in my Mamiya 6, however, so I decided to go out and finish the roll.  I took some more film to shoot, too.

Driving down a main artery to Gotham, just before Little Vietnam, I saw these kids.  He was skateboarding and she was rollerblading behind.  It was impulsive, but the timid never get the photograph, so I pulled the car over, got my camera, jumped out as the cars whizzed by, and waited for them to approach.  A block before they got to me, however, they turned off.

My car was running, the keys in the ignition, but I headed out for where they turned.  When I got there, I saw that it was a big, empty parking lot.  They had skated to the back of it and were looking at a fence.  I think they were looking for a shortcut to the Urban Trail that lay behind.  Fortunately for me, there was no cut through.  I looked back at my car.  If I stepped into the parking lot, I wouldn't be able to see it when some pill head stole it.  Shit, shit, shit.  I ran back to the car and took the keys.  When I got back to the parking lot, the couple was headed toward me.  I held up my camera like a soldier surrendering his rifle, a sign of peace.

"Hey, can I take your picture?"

Yea, it was that clumsy.  I was breathless.  Not from running.  From excited fear.  I don't talk to people anymore, and never with a camera.

"Which one of us?" the woman asked me.

"You, of course," I wanted to say.  "Just roll around for me flouncing your pretty dress."

"What kind of camera is that?" asked the man.

I told him and explained what I was doing, experimenting with film development, etc.

I hurried too much, though.  I was blind with anxiety.  I took two pictures and asked them if they would like copies.  They looked at one another.

I gave them my cell number and said they could just text me where they wanted me to send them.

By the time I got back to the car, they had texted me.

"Thank you," they said, giving both their names.

When I put my camera down, I noticed he lens cap was on.  Had I left it on the whole time?  You can do that with a rangefinder camera.  You do not look through the lens, so you can think you have it off.  I couldn't remember.  Quickly I jumped out of the car and ran back.  They were still there.

They laughed and I took two more photos.

Back in the car, I realized I was sweating.  But I was happy.  Yea.  Look at me, taking photos and making friends.

I decided to park my car at the photo store and walk around some with my camera.  I would finish the roll.

I did, and then some.  In a little while, I headed back to the house.  I couldn't wait to develop the film.

I went to the garage and got everything I needed to mix up new developer and fixer.  When that was done, I went back and loaded the roll of film with the couple on it.  I decided I wouldn't experiment with these.  I'd just make sure I was getting it right.

Developer, fixer, rinse.  It took eleven minutes plus another couple to rinse.  When I pulled the film out of the tank, however, I panicked.  Nothing.  There was nothing on the film.  Then I came to the last part of the roll which was actually the first part.  There were five pictures, four of the kids.  Oh, God, thank you, thank you.  But. . . I had shot the rest of the roll with the lens cap on.  WTF?!?!?

I had two other rolls of color film I shot to experiment with.  I used a black and white fixer with the color film.  Those two are still hanging up.  I will see what they look like later today.

In a few moments, I have a big truckload of mulch coming that will dump the lot into my driveway.  Oh, my.  Then the fun begins.  Big Balls in Cowtown once again.

I sent the photograph at the top of the page to the kids last night.  They were so wonderfully appreciative, it made me weepy.

The truck just came, same driver as always.  "My once a year friend," I shouted.  We chatted and I showed him where to dump the load.  It is brown rather than orange this year.  It looks like old mulch.  The drive won't be as spectacular as it usually is, but that golden color doesn't last forever anyway.  It is a big pile.

"When are you coming back to help me spread it," I asked?

"Really?" he said with surprise.

"I'm not looking forward to spreading this the way I used to," I told him.

My film scanning may need to wait.  There is much to do around here the next few days.  If I am ever going to go anywhere, there are things to be done.

Funny thing.  I'm shooting with color film, but then, when I look at a black and white version. . . . 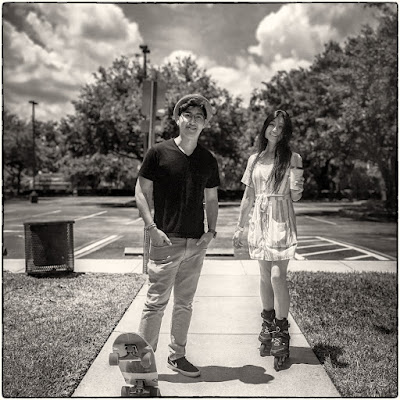