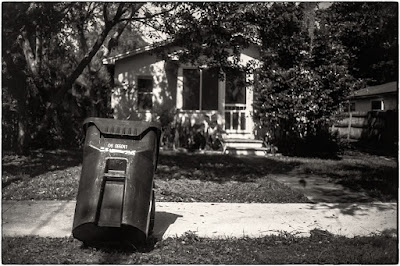 Things I've ordered keep coming.  Last night, I opened the door to a package from Japan.  It was the 250mm lens that I ordered for the Chamonix 4x5 camera.  Another barrel lens is supposedly arriving from Europe today.  Exciting, right?

It would be if I were out using the camera.  Oh, that would be fun.  Rather, I am cleaning my deck.  I didn't know I had to clean it before I sealed it.  Luckily (or not), I decided to watch some YouTube videos on deck painting.  This was AFTER I had made a trip to the Benjamin Moore store only to find they didn't have a clear deck sealer.  And so, I drove to Home Depot to get the sealer and a sprayer that the HD lady said would be the easiest way to apply it.  O.K.

After watching the video, though, I trekked back up to Home Depot where I bought the chemical cleaner and a big scrubber to rub it in.  Terrific.

By this time, however, it was above ninety degrees.  I cleared the deck of all you might see in my later afternoon phone pics--big planters and small pots, a cast iron table and its big glass top.  This scared the hell out of me, of course, for as you probably don't know but might depending on how long and how reliably you have been reading here, I dropped a similar glass top on my right big toe while moving furniture for the big hurricane that never came shattering it into jigsaw pieces and spewing blood and guts all over.  That memory was with me every second as I hauled that five foot glass table top to the yard.  I was fairly shaking when I sat it down, leaning it against a tree trunk in order to invite any miscreant with a rock to take a shot at breaking it.

I moved the wrought iron chairs, and then the grill and two tanks, and the door mat.  Of course, almost everything I moved left a damp spot.  The chemical cleaner box said that the wood had to be dry before application.  Fuck it.  I was done.  It was hot.  The deck cleaning would need to wait a day.

Which is today.  In a minute, I will be out giving this whole thing a shot.  The tenant asked me why I didn't hire someone who knew what they were doing.  Good question.  Because I am a retiree in the time of inflation, I guess.  Because this is what REAL men do?

Of course, we all know the REAL reason.  It's because I just spent my money on camera gear I am not using.

But she's right.  I'm sure to fuck this up.  I can feel it in my bones.  But as my mother said last night, "You'll know how to do it next time."

In the evening, sitting in the chair now in the yard having the evening cocktail, I decided to change plans.  I had decided to just seal the deck with a clear acrylic sealer, one over which I could paint if I decided.  I decided over the cocktail, however, to just seal the deck with the acrylic paint instead, the color to match the trim on the house.  Which means a return trip to Home Depot.

I got gas at the big industrial gas station there.  $4.59/gal.  I don't want to keep driving to Home Depot.

Yesterday morning, I had my Apple Music station playing when this came on.

Holy smokes, that song is just too good.  But it takes me back to my hillbilly youth among the rednecks and crackers here in the sunny south.  This is exactly what it sounded like to live here then.  I need to generalize and stereotype here, two things I just love to do.  But these are my recollections and impressions.  Southern men had small, squinty eyes.  There were no large eyed crackers unless they were rich, but barely even then.  You did not want to be doe eyed in the south.  No sir.  You would be meat.  So, if you didn't have small, beady eyes, you constantly squinted.  That's the look of a southern man.  They always looked pissed off that the world was so damned confusing.  To combat this, they were certain.  They had learned the Homer Simpson philosophy of the playground--don't say anything unless you are sure that everyone agrees.

Nights were hot and dangerous, boys smoking cigarettes and drinking beer and whiskey outside the youth center dance.  Inside you danced and sweated until the colors of your madras shirt had run.  Outside, beady-eyed boys were looking for a fight.  Later, once in awhile, there would be making out with some big-haired girl or even later hunching one out in the sweaty back seat of somebody's car.

That's what this song sounds like to me.  Those were horrible times, but goddamn that song is good.