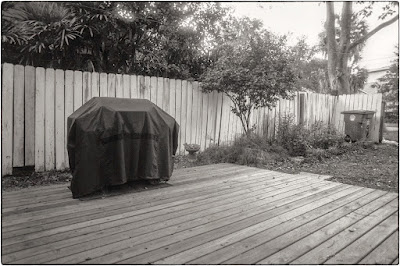 I did what I told you I would do.  I chemically cleaned my new deck.  Big mistake.  There will be no painting and sealing of it today.  The wood is not ready.  I will have to let it continue to dry for another month.  But, I was successful in my incompetence.  I mean, an hour after I had opened the sprayer and puzzled over how to put it together wondering fifty times at least about why in the hell I was required to assemble any of this mechanism, after putting the wrong end of tubing on the wrong spout again and again, after all of that, I poured the chemical cleaner in the sprayer--and it worked!  My deck is 16x22, so I would slowly walk the sixteen feet one way and slowly walk the sixteen feet back spraying one board at a time.  It wasn't quick.  I worried about running out of cleaner at the halfway point, so I speeded up my walk and made it through.  Then I scrubbed the wood with a big, rough broom.  And then I sprayed the deck down over and over and over again.  And what I noticed was that the water was still beading up on parts of the deck.  N.G.  When that was done, I went inside and Googled "painting pressure treated wood."  I swear I have Googled this multiple times and have read multiple times that the wood would cure in two months.  Everything I read yesterday said three to four.

In the afternoon, I put everything back on the deck.  I will wait another month or so.  By then, however, the rains will have come.  I don't know.  Whatever.  We'll see.

Meanwhile C.C. was texting me snapshots of Courbet's L'origine du Monde while he lunched at the Musee d'Orsee, one of my favorite places to be.  We are living different lives, he and I.

"Why don't you just hire somebody who knows what they are doing to do it?" 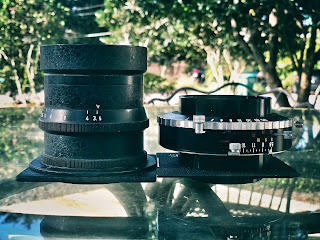 But that is what I did instead of trying out the two new lenses that arrived, one from Japan and one from Europe.  They are real beauts.  Now I'm all upside down in camera gear that I am not using.

I will use them today.

Oh. . . I must answer some queries about yesterday's post.  Yes, it may be true that southern men squinted because of the brightness of the southern sun.  That could be.  But then, I ask, why did they try to talk without moving their jaws?  They always seemed to talk with their jaws clenched.

And the humping in the backseat of cars was dry humping, clothes on.

Dry humping.  Ha!  I'm pretty sure those are not words in the current youth vocabulary.  Dry humping, indeed.

Sex was still a mystery then.  You really had a night if a girl let you "feel her up."  And if you were a decent kid, you felt really conflicted.  If you truly liked her, you might be thinking about marriage.

But I didn't know too many "decent" kids.  The boys I knew were real bad kids.  I will tell you more stories sometime.  These were boys without moral compasses as far as I could tell.  Later, for many, their moral compass would be formed by prison.

It was all just motivation for me, something to get away from without knowing exactly where I was going.  Just away.

I had to take someone to the airport mid afternoon, so I stopped by my mother's house early on the way back.  When I got home, having been robbed of my afternoon nap, I felt pooped.  I finished setting up the deck and poured myself a drink. 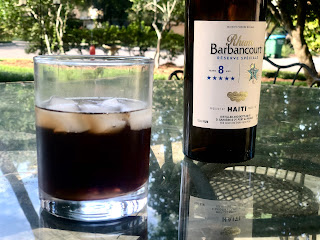 What better on a hot summer day--wait!  It is still spring!  With global warming, they will need to change the calendar a bit.

What better on a New World hot New Summer day than a Cuba Libre.  Or in this case, a Haiti Libre.  Barbencourt is one of the best rums in the world.  Aged eight years.  It is almost a crime to mix it with anything.  It has a good flavor on its own.  It is the drink of rich smugglers and pirates.  That, at least, is who introduced me to it long ago in Old Key West before the time of cable t.v. and internet.  If you have never had it, do yourself a favor.

But the day had left me wasted, and after a simple dinner, I sat down to watch some more of the Heard/Depp trial.  I'm sure hoping that there will be a Season Two.  Season One has been spectacular.  But I was tired and fell asleep.  When I woke, it was well before my usual bedtime, but what the hell, I thought, take an Advil P.M. and go for broke.