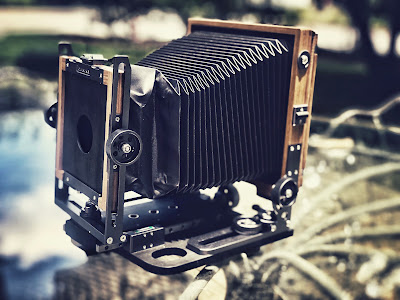 My new "instrument" has arrived, and it's a True Beauty!  It is light as ether and a joy to gaze upon.  It scares the heck out of me, though.  What if I don't make great pictures with it?  Well. . . I guess I can always use it as an expensive prop.  I spent most of yesterday afternoon figuring out how to manipulate it, the rise and tilt and shift mechanisms, the back focus, the variety of places to set the front standard, how to switch the film holder from horizontal to vertical.  It came with no handbook, no guide.  I guess the guy who makes them thinks that if you are buying such a sweet camera, you already know how to use it.  After a few hours, I did.

Except. . . I don't have a lens for it.  I thought I could take one of the lenses from another camera and slap it onto the lens board, but I don't have the tools to do that.  I didn't know it took tools to put lenses on and to take them off the board.  They are very specific.  So. . . today I am going to take my camera to show my camera repair shop buddy and see if he has any lenses I might want.  If not, it could be another week before one arrives.

I do, however, have (I know that this is a split infinitive, but I like it that way) some lenses on lens boards that almost fit.  They are made for another camera and are less than half an inch too short on the vertical sides. I am thinking to tape them on with gaffer's tape, however, to give them a try.  I held them on with my hand yesterday to see and image on the ground glass and got excited.  More than a little.  But also frightened.  It is so easy to forget how long setting up a shot takes with these things.  AND. . . the image is upside down and backwards.

But that's the thing, isn't it.  The technical aspect.

I was wishing I had spent the money on a medium format digital camera right away, but the difference in price is so great, this camera would barely make a dent in the price tag. 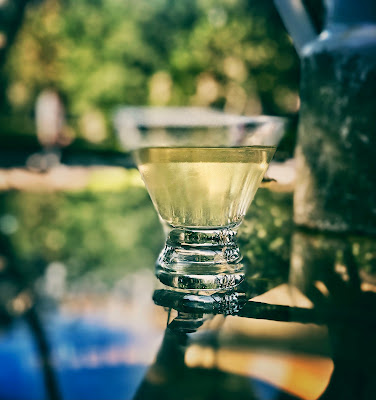 Really.  This is a phone snapshot.  It does everything that large format camera is supposed to do, right?  That shallow depth of field?  That bokeh?  And it is ever so easy.

But also. . . I'll call my sponsor today.  I've got to get back on the wagon.  At least hold onto it.  It would be goodI for me to slow down a bit.  I'll spend a few nights without drinking.

"But what about the Drunkard's Bluster?"

I went to the gym yesterday.  Nobody yelled "Baby Raper!" when I walked in.  Nor at all.  I guess I'm safe. But I fell right back into the same time suck of a routine.  I need to change that as I hold onto the wagon.  A rearrangement would be good right now.

After I have spent all my money on camera gear, I know I will become a phone photographer.  I don't know why someone doesn't just make a camera phone without the phone.  I mean, make the camera part the priority.  It should still have all the other functions, but it should be a camera with phone capabilities.  The camera phone apps are awesome, but you can't use them with real camera files.  Now that I know I can print those phone images fairly large. . . .  Yes, I'm sure to become a phone photographer.

The "Wrecking Crew" comes today.  I have a bit of clean up to do before they come.  I need to get the bed linens into the wash.  It is good that I have an early start.

That's it, the end of my dry technical gushing over the "True Beauty" that I will probably never use properly.  I can't be witty and clever EVERY day.  Well. . . I can. . . but not always in writing.

But I did leave you some pretty phone pics.  They are true beauties, too.