We Were Both Champions--Decadent and Depraved 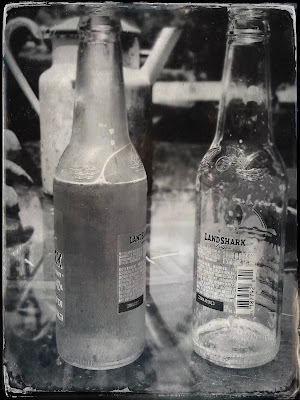 BBC once again.  Big Balls in Cowtown.  Old and crippled, I still had it in me to decimate that mound of mulch.  It was more difficult than ever before, but that was only because of my expensive new wheelbarrow.  I searched high and low but couldn't find the kind I had before, so I bought a monster and monsterly expensive one.  Its materials were heavier and it held more mulch, but the real thing is that I could not tip it easily and get the mulch out.  I had to wrangle the heavy bastard constantly wrecking my back.

When I started, a truck pulled up and a man leaned out.

We chatted and he gave me his card.  As he drove off, I was thinking I should have at least asked him how much.

The famous writer came by.  "Hey, buddy, you need a support belt!"

That was true.  When Ili helped me, the thing was much quicker and easier.  If I simply had somebody to rake down the mounds I dropped. . . .

Halfway through, I sat down to take a break.  I opened a beer.  Oh, I thought, this is going to be a big mistake.

No matter.  I finished at my predicted time.  I still have a little clean up to do this morning, but the pile was gone.  The deal was done.

And I was whupped.

I drank another beer and took a nap.  When I woke up late in the afternoon, I was feeling funky.  I needed to make a trip to the grocery store and the liquor store and the CBD store.  I called my mother and said I wouldn't be over.  I wanted to get things prepared so I could watch the Kentucky Derby.

Back home, I put everything away and poured a scotch.  I fitted a cheroot into my cigarette holder and sat on the deck gazing over the days work.

When the cheroot was finished, I fired up the grill and cleaned three large beets for grilling.  I wasn't up for really cooking, though, and I took a pack of breaded cod out and put those on the grill as well.  I opened a can of lentil soup.  I hadn't eaten a thing all day, so I poured a wine rather than another whiskey. 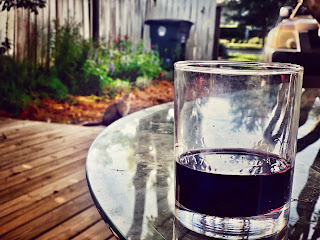 The tiny thing on the edge of the deck is the feral kit-cat.  She loves the new mulch.

The fish and soup ready, I plated my meal and ate on the deck.  There was still forty minutes or so before the race.  I texted people.  It seemed nobody else was planning on watching the race.  I always watch The Kentucky Derby, not because I like horses but because my father always watched it.  It's just a thing.  But I've learned to love the effort those little beasts put into those two minutes.  Coming down the home stretch you can see the fatigue and strain in their wild eyes.  The eyes tell everything.  You can see fear and rage in them.  In case you have been in a cave, yesterday's Derby was one of the best ever.  The least likely horse in the race, one only entered the day before, an 80:1 long shot, came up the inside of the track on the home stretch.  Two of the favorites were far ahead, but Rich Strike had some luck slipping between other horses and managed to catch them.  You could see the fatigue in those leaders bodies.  You could feel the lack of oxygen in the muscles, the burning of metabolic acids as their strides began to tighten.  But Rich Strike had been sitting back in the pack and looked fresher.  The thing is--just watch the replay.  Look at Rich Strike's eyes as it approaches the leaders.  Look at the wildness, the crazed anger.  Jesus, that horse was maniacal to get ahead, and he passed them with everything he had.

I texted friends.  Nobody had been watching.  But then. . . I got a text from a pretty girl.  She always watched the Derby, she said.  Of course she did.  She was wearing a hat in a bar.  Good for her.

In a little while, the big beets were ready.  They took about an hour and a half to cook.  I sliced one and crumbled on some goat cheese and drizzled some balsamic glaze. 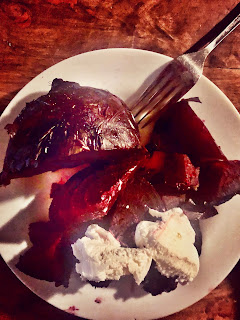 The day was done.  I was spent.  Rich Strike and I had quite a day. 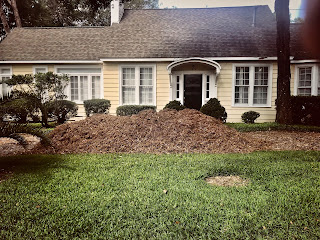