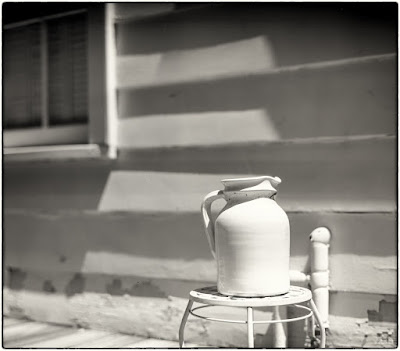 I've eschewed all other cameras until I get good with large format.  There is, I am finding, something thrilling about making pictures with big cameras, about developing big negatives.  It is difficult to explain, really, but each one seems especially precious.  I could probably have made this photograph with a Hasselblad, but it would not have been as deliberate.  I can develop only four negatives at a time.  If I added up all the time it took to take, develop, scan, and post-produce those four. . . but I won't.

I can only say that right now, I don't want to use any other cameras. 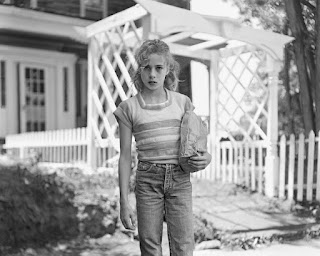 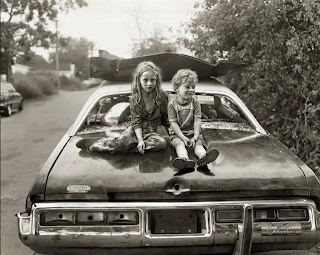 Here are some large format photos from another photographer, Christine Osinski, and her one book, "Summer Days, Staten Island."

In 2005 Osinski became a Guggenheim Fellow and in 2015 she received a grant from the Pollock-Krasner Foundation. Her work has also received support from New York State Council on the Arts, The Graham Foundation and Lightwork.

Osinski's work may be found in many collections including: MOMA in New York City; Museum of Fine Arts in Houston; Museum of the City of New York; Portland Art Museum in Oregon; Bibliotheque National in Paris; Fogg Art Museum, Harvard; Berkeley Art Museum in California and the New York Public Library among other collections.

She made the pictures in 1988.  Easier then.  I know.   The Great American Paranoia had yet to set in.  But I want to make them now.  I want to begin my own Summer Series, something like the one I did in "A Few Days One Summer" (link).  But Holy Hell. . . that was hard.  How much harder would it be today?

I'll simply say I have interest.

I was dragging yesterday when I got up, and I had much to do before cooking for my mother.  I thought that maybe a trip to the gym would straighten me out.  Just blow out the bad juju, etc.

It didn't help.  I felt worse.  But I showered up and cleaned up the house and called my mother and said I was ready.  When she got here, I started making lunch--big hamburgers that I had the butcher grind from stew beef, low fat and medium fat hot dogs, baked beans, etc.  I had moved the grill off the deck when I cleaned it and decided to just leave it where it was.  Problem--it wasn't level.  When I put the hot dogs on, they kept rolling to the front.  Not feeling well, I tried to do too much all at once wanting simply to have it done.  And, of course, I fucked it all up.  Hot dogs rolled off the grill onto the ground.  I dropped hamburgers.  I burned the buns I was trying to grill.  Still, there was enough food for the picnic.  We ate outside in that little bit of time that Mother Nature gave us a small breezes.  My mother said it was good, but I know it wasn't.  Worst bbq ever.

By evening, I was feeling worse.  C.C. and I had planned to have lunch today, but last night I wrote to warn him that I was not feeling fine.  I woke up this morning feeling no better.  I even have a stiff neck.  It hurts badly to move my head in any direction.  I'm going to have to cancel, I'm afraid.  I'll call my mother at a proper hour and see how she is feeling.  I guess I'll need to get a Covid test.  I don't think I'll die, but what a drag.  It might not be Covid, though.  There is a terrible cold plaguing the community.  I've known several who have had it.  Either way, I should probably not go to lunch with c.c. which sucks as he said he had something for me brought back from Paris.

June 1.  The kids are out of school.  There have to be pictures everywhere.  All one needs is skill and courage.

I'm getting the skill part down.