They Can't All Be Winners, Now, Can They? 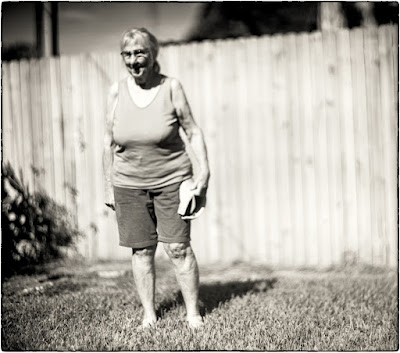 The Liberator, handheld.  My mother, 90, working in the yard, not quite in focus.  I've since told her to focus.  I have some photos where she has, but I'm finding that the lenses on the Chamonix are very "clinical" compared to the big old AeroEktar on the Liberator.  It is creamy.  It is also hard to focus when the aperture is wide open.  What is in focus is very sharp as you can see with the grass just in front of my mother.  There is also a slight ability to tilt the lens board or front standard which will throw some things in or out of focus.  As a result, shooting wide open with that camera is difficult, especially handheld.  It weighs about ten pounds and is awkward to hold.  But I still love it.  I've found that I am most attracted to having a subject about fifteen to twenty feet from the lens as my mother is here.  It throws both the foreground and background out of focus and leaves the subject rather floating in space.  This picture is approaching the style I'd like my next project to take, subjects about this distance, lens wide open, bright sunlight.  I wish I had hit focus on this one.  It is somehow eerie, I think.

I felt like crud yesterday.  I texted C.C. that it would be safer if I didn't meet him for lunch, that I was going to take a home Covid test.  I found the kit in the bottom of a bathroom drawer and opened it, followed the directions and then some, rubbing the swab around the high parts of my nasal cavities for extended time.  Fifteen minutes later, I was negative.  That made me feel better, and since C.C. is leaving for another trip in a few days, I texted back and reported the results of my test and said I could meet him for lunch if he still wanted to.

We met at my favorite Spanish restaurant.  I got there first and sat at the corner of the big bar that looks out through ceiling to floor glass to the busy street beyond.  The barmaid I wrote about as possessing the right mix of professionalism and humanism was working.  She remembered I had a cranberry and soda last time I came.

"How do bartenders do that?" I asked.  "How do they remember what people drink?"

I can't remember anything so I am always amazed that bartenders know what I like.  I thought there was surely some bartenders trick, and maybe there is and they are sworn to secrecy.  I don't know.

She was wearing the same large framed heart shaped glasses as she was before.  I noticed that the right lens had a heart image on it. . . but no. . . wait. . . it was a tattoo below her eye where a killer's teardrop would be.

I was sure she didn't just "forget" to take it off.

"Well, listen, I was trying to lose weight when I ordered that A.A. cocktail before, but I've given up on that.  It didn't work and it wasn't fun.  I'll have something real to drink today."

"No thanks.  I'm trying to dehydrate."

"Good girl.  I dated a veterinarian for a while.  She told me she liked my eyes, that they were always a little sunk in from dehydration.  What the fuck?  I guess I never drink enough water, either."

C.C. showed up looking dapper in a fedora.  As you know, I have two now, but I haven't worn them into the public arena yet.

"Hey man, I've got my big old Liberator in the car.  When we are finished, I want to take a photo of you in front to the new library building."

The city just spent a ton of money building a new library designed by a very famous architect.  It is a notable design, though I think it sucks.  Still, I had a vision in my head.  It would look very, very cool.

We ate and drank for a long, long time.  For the first hour or so, we were the only two at the bar.  C.C. had brought me a nice gift bottle of wine from Paris.  Sweet.  We chatted about his trip, where he went, what he did, where he was going in a few days.

"Here we are, two old queens out on the town," I said to him, a refrain I started with him many years ago at another bar where the waiter was a kid who attended the factory and who knew who we were.

"What are you two up to tonight?" he had asked.  I always enjoy giving an answer that is insouciant.

It is just that we all become fairly trans with age, right?  My republican buddy sent me this yesterday.  It just broke me up. 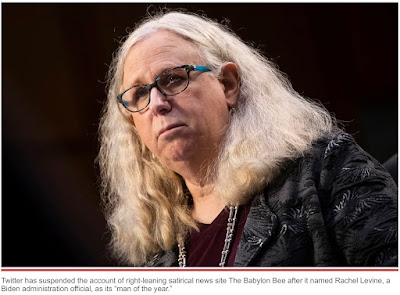 Hell, man, I said, that could be a picture of any of us.  Do you have man boobs yet?

People have lost all sense of humor. . . maybe.  The audience laughed when Ricky Gervais said:

“Women … not all women, I mean the old-fashioned women, the ones with wombs … those fucking dinosaurs … I love the new women, they’re great … the ones with beards and penises.”

It's all funny to me.  Life is a fucking joke anyway.  Just surviving, getting enough to eat, having a good place to sleep, simply staying alive is hard enough.  The rest of it is just gravy.  It beats me why so many people want to be haters, but they do.

Maybe it is baked into the genes.

"It occurs to me that that heart is in the same location as a teardrop would be," I offered the barmaid.  "Are you supposed to be some kind of emotional killer?  Did you have to break a heart to get that?  Had you thought this through?"

When we left the bar, it was mid-afternoon.  It was hot, and we'd been drinking.

"It's too hot to fuck around with the picture," I said.  He agreed, perhaps with relief, and we said our goodbyes.  As soon as I got to the car, though, I knew I had made a mistake.  It would have been a great picture.

"The road to hell is paved with unbought stuffed dogs," says Jake Barnes' good friend, Bill, one drunken night as they pass a taxidermist. "Have it your way."

I was certainly on the road to hell if Bill was any kind of savant.  Never pass up a good picture.  It won't be there tomorrow.

I need to get started on my photo project.  It could be the last.  I'll call it, "Summer Photos Before the End of the World."

Or something of that sort.