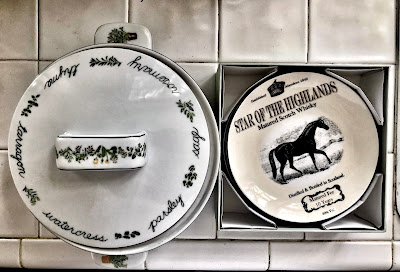 Day Two: Cabinets.  What a mess.

There was nothing to do but empty them all.  Again.  Even the ones I did the day before.  It's a matter of organizing, you see, and I am not good at it.  It must be genetic.  My mother isn't, either, and my father certainly wasn't.  O.K.  Maybe it is an "unlearned" trait.  Like goes with like, you know. . . but I find connections between everything.  I guess that would do me little good on an I.Q. test.

Which of the following items does not belong:

Obviously, its the box, but they all fit in a box, right?  Well, depending on the size, but at the Container Store. . . .

So everything came out and I started again.  I didn't bother texting my friends this time.  I was less proud, more grim.  After the cabinets were emptied, I sat looking at the mess I created.  It didn't seem like it would all go back into the empty spaces.  Decisions had to be made.  Things would have to go.

In the back of some cabinets, I found things I didn't even know I had,  Whiskey dishes?  What is that?  A super heavy dish with a top that has herb names written on it?  What do you do with that? 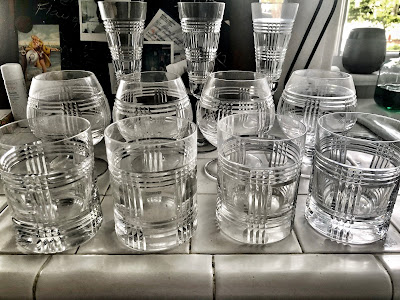 And there was the great crystal from my marriage.  Big, heavy brandy glasses.  I never drink brandy.  "I should buy some Armagnac," I thought.  Such things should at least be on display.

I found a thing I thought was a waffle iron.  I've never made waffles, never used a waffle iron.  Where did it come from?  Still, I was excited.  I opened it up.  There were four little indents in the top and bottom, sort of like cup holders.

It must have been Ili's, but I haven't any idea what this thing is for.  It felt to be about thirty pounds.  Not something I would ever use, not something to keep.

Dozens of wine carriers.  A dozen dish towels.  Bottles and jars of every kind.

I sat.  I thought.  I decided on a different arrangement than I had before.  I sprung into action.

A knock on my kitchen door startled me.  It was my mother.  She was going home from church and thought she would just drop by.  She looked around.

"Wow.  This is really something."

She didn't stay long.  I told her I'd make small red beans and pork shoulder with rice for dinner.  I'd see her then.

Now it was imperative.  Back to work.

By three-thirty it was done.  The garbage cans were full.  The counters were clear and clean.  The cabinets were almost pretty.

Holy shit, though--look at the time!  I rushed to the store to buy the stuff for dinner.

When my mother came over, she ooo-ed and ahhhh-ed.  "I've never seen your kitchen look this good."

We settled into a glass of wine, then dinner.  She was gone by six.  The kitchen was cleaned again and everything was put away by 6:45.  It was time for a drink and a little cheroot.  It had been a hell of a day--or two.

The day had been a horrible pressure cooker of tropical air, but now, after a slight rain, the air was fine again.  There was a slight breeze.  The cat came for her dinner.

I read for awhile, but at eight I thought I'd watch the second game of the NBA finals.  I tried, but I couldn't do it.  The commentators were terribly dull.  I couldn't take the commercials.  How do people do it?

I tried watching a movie, but the television didn't interest me.  I made some tea and read.

I will go back to bed now and see if I can't sleep for awhile.  The sun will be up soon, and maybe that will comfort me.