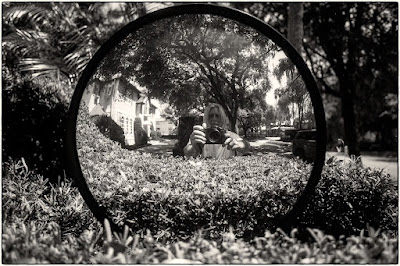 I often think of what I will write about in the morning when I go to bed the night before.  It mostly does no good, though.  I've usually forgotten it in the morning.  But when I sit down with the coffee and the computer, one or maybe two things will come back to me.  Many times, however, I've been too influenced by what I've read in the news.  Now that I hardly read the news and stick mostly to the head and taglines, I should remember more.  I do remember much of what I thought about last night, but since I had no sleep the night before that, I took Advil PM and Tylenol.  Sometimes they work.  Sometimes they don't.  Last night they did.  I slept for 9.5 hours and feel like a drug addict this morning.

Bemused, befuddled, and bewildered am I.

That's not quite a song.  I think it's a board game.

I look at today's photo and think, "Maybe that is why people yell at me when I go out with a camera."  It's just not normal, is it?

That photo maybe explains a lot of things.

Last night I got a text from a former employee from the factory.  He wanted Ili's number.  It seems he needed some advice on a legal matter.  I wrote back to him and said that Ili and I were no longer pals and I didn't feel comfortable giving him her cell number, so I gave him her business number.  Then I texted Ili to advise her and to ask if she wanted me to provide the fellow with her cell.  What I got back was, "You've got the wrong number."  It seems she's discarded that phone.  I looked back at the text record.  It had been over a year since we last texted one another.  I don't know why, but it felt like a punch.  Why should it, though?  I don't know.  It just seemed directed at me.

But aren't all things?  Isn't it all about me?

I'll buy a new coffee maker today.  I hate to spend the money.  I have a very good one, a Cuisinart that has a bur grinder on top and a thermal carafe to keep the coffee warm.  But it doesn't.  Not long enough, anyway, and I'm tired of drinking lukewarm coffee on the second cup. The idea is that keeping the coffee on a heating element makes the coffee bad--or something.  But NOW they make the same coffeemaker with a glass carafe and a heating element.  It is some "expensivest shit," (link) but I've got to have it.

When I got the text last night, I was listening to this.  Ha!  Sweet Poison.  You better get it while it's hot.