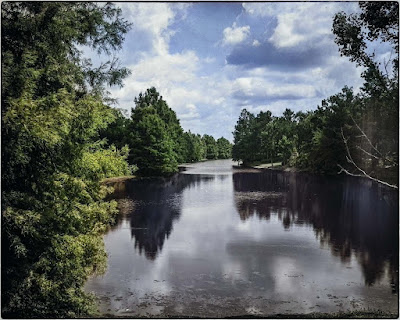 Does it look like a color photograph?  It is not.  It is a colorized black and white photograph.  And holy smokes, folks. . . I love it.  If I post it on any of the large format photography sites I visit, though, I will surely get excoriated.  I do for much "lesser" offenses.  There will be plenty of people who enjoy it, then some dinosaur with a big camp following will provide us with the gospel.  It is wrong, you know. . . why don't you just. . . blah blah blah.  And after the hurricane, I will simply write, "Wow. . . I guess you really feel strongly about this.  I was just having fun."  Or something of the sort.  And then maybe a moderator will come in with some mediating statement that tips the hat to the dinosaur but hopes that I will continue to exercise my creativity. . . or something.

And then the camp followers will weep with confusion.

I've been very sick these past few days, more so yesterday than the days before.  My digestive track blew up and I was in agony.  I, of course, being a catastrophic thinker, was wishing I had done more end of life planning.  No, not a joke.  I felt that bad.  Two days of terrible body pain then this.  I was going down hill fast.  Still, my mind was working on the cause of my demise.  The ones I hoped for were recent.  Here is a statement from the CDC:

Infants, children, the elderly and people with chronic illnesses or mental health problems are especially vulnerable to heat-related illnesses, though young and healthy people may be affected, too, if they are doing strenuous activity in excessive temperatures, according to the CDC.

I don't like to think I have a mental health problem, but who knows?  The past years have probably taken a substantial toll.  But the three days of working in the tremendous heat and rehydrating with beer and cocktails was proabably a dangerous idea.  Tarzan in Decline.  And then there was the infusion of fuck all into my veins and butt cheek.  Could I be having a bad reaction to that?  I had no way of knowing.

But Saturday night I was feeling very ill and didn't feel like making a big meal.  Still, I needed to go to the grocery store to get something.  When I walked in, I suddenly got a terrible chill.  Goose bumps popped up on my arms and I began to shiver.  I didn't think I could do any shopping without incident.  On the table, however, just before me were bags of ravioli with spinach and Parmesan.  BoGo.  Twofer.  Just boil for four minutes and top with sauce.  I grabbed two bags and headed for the checkout.

Now, most of the time I see packaged raviolis, they are refrigerated, but I had to figure they knew what they were doing.  That was all I ate for dinner.  I woke up in the night with a bad belly.  That got worse throughout the day.  Was it possible that those little raviolis did me in?

Then there was the darker, looming thing that will eventually catch us all.  I am not ready for that.  It makes me sad and lonely.  But as I say, I'm a catastrophic thinker, and sitting alone sick for three days. . . .

All I could do was sleep and watch t.v. and suffer.  I ate nothing yesterday.  I drank an aloe drink and then some kombucha.  Then I made some herbal tea.  I still had chills.  I set the a.c. up several degrees and put on a long sleeved shirt.  I called my mother to tell her there was no way I would make it over for dinner that night.

I watched endless hours of t.v.  Most of it was time filler, but I rented the film "Julia."  I'd been wanting to watch that for a while, and it had wonderful reviews.  But as all biographies go, it starts with an early in life conflict, then there are the happy successful years, then the decline into the indignities of old age and death.  At film's end, I was sobbing uncontrollably.

Nope.  There is nothing wrong with me.

Later, I chanced a little food, a lentil soup over rice, and that went down o.k.  Later, just before bed, I had some Golden Milk (link).  That was O.K. too.  I took some Tylenol and went to bed.

I slept well through the night, but this morning, I woke with trepidation.  If I am sick another day, something will need to be done.  Lying in bed in the early light, I began a survey of my body.  Did I ache? Was I bloated?  Did I have a bad gut?

It is still early.  The jury is still out.  But I think the thing is passing, whatever it is.  I really won't know until I try to do something physical.  Sitting here without moving, though, I think I feel better.

There is another "heat dome" approaching.  Temperatures will go back into the high nineties.  I'm done with working in it.  I pity all those who must to make a daily wage.

O.K. I'm going to go post that picture like some heathen sinner on otherwise clean sites.  Let's see what happens.