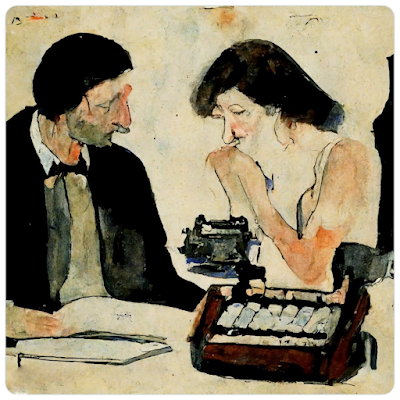 It is, officially, Summer, once people's favorite time of year, now the Season of Terror.  This will be the longest day of the year--twenty-four fucking hours.  No, no. . . you know what I mean.  It is the solstice, and as you learned in elementary school (right?  they still taught things like this?) in the Northern Hemisphere, this is the day the sun stays above the horizon for the more hours and minutes than any other day.  For some of you, it may seem never to set.  For my friends in Sweden, for instance, it will be a day without end.  But maybe in Sweden, summer is still a time of celebration.  Don't worry, my friends--we will all be moving there soon.

I feel better today than I did yesterday, I think.  I did not just bounce back from whatever malady preyed upon me.  It seems to be a slow recovery.  It has left me mentally pooped.  My thoughts have been darker than usual, and the relentless solitude has not helped.  I will begin to go out to sit on public benches in order to talk to people soon enough.  I will become a "figure."

That is the sort of thing that creeps into my thoughts, you know, but then I will go to the grocery store or the photo shop and some girl will smile at me, and I will be happy again like an old man who's lost much cognition.

Today, I know that's silly.  That is how I know I am feeling a bit better.  I still "know my place."  But won't it be a happy release, one day, when I've become so senile that such things won't matter, when I can shit myself in public and laugh?

"Jesus man, c'mon, stop with that stuff.  Why do you have to say things like that?"

"I've been reading Houellebecq again.  His writing has an influence."

But there are good things, too.  I've only consumed about 1,200 calories in the past two days, so I consider this the start of a new weight loss diet.  I am surely over the DTs by now.  That lent substance to my darkened mood I suppose.  How could it not?

I also have learned that I MUST quit this macho stuff.  I can't keep up with my old self, that's for sure.  I will to have to give up on my Olympic dreams.  Tine takes its toll on everyone, even Batman. 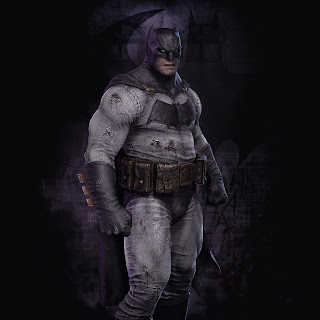 O.K.  That is still much too flattering.  Too young, too strong.  But I have cast a persona that I can not live up to anymore.  Pilates and chair yoga. . . that's where I'm headed.

"I thought you were going to be more positive?"

Yesterday, Amazon sent me this. I guess the algorithms caught me 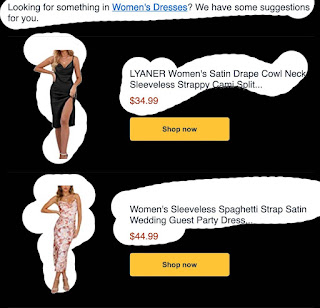 I thought this was funny and sent it around to my friends.  Here was the typical response:
"I cannot even imagine you in drag. You’re WAY too much of a guy. Don’t try it. 😂 "
Well, not completely true.  There were many people hoping to see me "come out."  There were those who would probably like me better this way.  I had to confess that I am only wearing Mumus.
Speaking of which, have you seen what happened to Gerard Depardieu?  Gone the way of Welles and Brando.  But I relate.

On 18 May 1998, Depardieu had a motorcycle accident with a blood alcohol content of 2.5 g/l [53] on the way to the shooting of Asterix and Obelix vs. Caesar, by Claude Zidi. He was prescribed forty days off work.[54]

In 2012 he was hit by a car while riding his scooter in Paris.[55] The same year, while intoxicated with 1.8 g/l of alcohol in the blood, he had another scooter accident, without injury and without collision with a third party.[56] Since the 2000s, the actor has suffered at least seven motorcycle or scooter accidents.

Uh-oh.  I've gone down the rabbit hole with this one.  No kidding. . . he made a movie with Houellebecq.

I will need to watch this.  Sadly the rabbit hole led me to another place.  This woman has claimed she was raped by Depardieu. 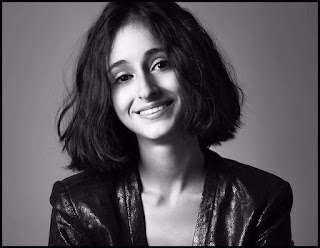 He tried to have the charges dismissed in March, but the courts dismissed his claim.  There will be a trial.

I shouldn't Google while writing.  This has become an utter mess.  But I think I am better today.  I've watched a LOT of t.v. the past four or so days.  A lot for me, anyway.  I started a Netflix series called "Web of Make Believe: Death, Lies, and the Internet."  It is shocking.  I've asked my conservative buddies to watch episodes 3 and 4.  That is as far as I have gotten, but the show covers in very graphic ways how hate is spread online.  I thought I had an idea, but I didn't.  It is pretty scary, and I KNOW that this is the source of "information" for even my smartest of conservative friends.  They float on top of the hate and madness of the mob, but they are living in the same info bubble.

More fun, however, I've been watching "That's My Time with David Letterman."  It's Dave being funny again.  It is like a short visit to the past, except with a beard.  It is a thousand times better than his other show where he tries to be an intellectual in order to cleanse, in some symbolic way, the sins of his past.  There is none of that in the new show.  And the longest episode is twenty minutes.  You're in, you laugh, you're out.  And the theme song is good.

How good!  It is so good I searched the internet and couldn't find mention of it.  I watched the end credits, but they are super fast.  Maybe a tenth of a second.  I tried twice but couldn't catch it.  Finally, however, intrepid fellow that I am. . . .