Disneyfication and the American Dream or BoBos in Paradise 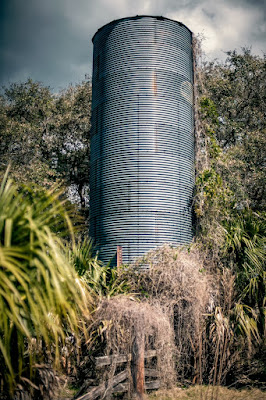 Just then, emerging from the jungle floor. . . !

That was from the old days when I used to leave the house.  Gas prices have gone up here to $4.80/gallon. With my gas hog, it costs me a day's wage to drive to my mother's house and back.  What happened?  It used to be easy living.  I have my own ideas about The Decline of America, but you know what they say about opinions. . . and I agree.  What I need is data, and I'm just too lazy or disinterested to go looking.  Like most news outlets, now, all I can do is opine, and usually, again, as they do, I contradict myself.  But you know what Emerson said--"Consistency is the hobgoblin of little minds."  I am one, however, whose genius is as someone else claimed--who was it?  I know Fitzgerald stole it from someone.  Something about being able to hold two contradictory thoughts at once without going mad.

Well. . . maybe I've gone mad in which case I might have to renounce the whole "genius" thing.

What I was trying to say, however, is that I have a dear friend who has been sending texts from a big Gay Pride thing that is happening here.  Now, if I dare use pronouns, "she" is real butch.  She gets called Mr. all the time by her own admission.  She is one of my favorite people in the world, partly for her sense of self-effacing humor and mostly because her life and her telling of it is as colorful and thrilling as anyone's I've known.  She was brought up wealthy in Okeechobee, land of migrants, miscreants, and mean-ass cowboys.  She wants to take me down there to make photographs, but it scares the hell out of me.  But, as I was not quite saying, she is texting me from this event.

Standing at the table for Come Out with Pride a creepy guy comes up and starts talking about party in his room, shares his room number. Says to Tatiana not for you-no girls. Then points to me and says but you come on over handsome. 🤣🤣🤣🤣🤣🤣🤣

She rarely bores me.  But later she said all the young boys were gawking around a table where there was some heartthrob.  She had never heard of him before.  She sent a name, then a photo.  Jesus. . . he was awful.  I wrote back that I used to think gay guys had great taste but that Disney had ruined all that.

See, now I have no data on that.  It is just an opinion.  I'll slap a title on it--"The Disneyfication of Gay Men"--and sell it.  As Hockney said, all this gay acceptance is great, but he misses the bohemian aspects that have been lost.  Gay men like Cary Grant and his "pajama parties," reporters lurking around the grounds with Speed Graphic cameras and flash guns trying to get the scoop. . . all that.  Now?  Gay boys drinking milk, holding hands, and wearing rainbow t-shirts.

Speaking of rainbows, my travel/art buddy sent me this last night. 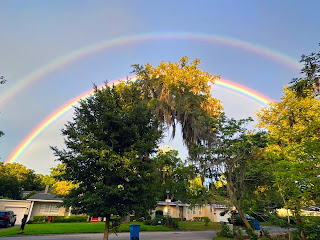 I think he took this from his front door.  A double rainbow.  He said he'd never seen such a complete double rainbow before, and neither had I.  But I wonder. . . did Come Out with Pride have something todo with this?

It was Sushi Friday once again, so I ordered take out while I was at my mother's.  The girl on the phone sounded cute.  She asked me if I would like to pay over the phone, and I said I could.  I gave her my card number and she asked, "Can you give my your expiration date?"  I read it off the back of the card.

"That's the card's expiration date, not mine.  You should probably learn to rephrase that question," I said wryly.  She giggled then laughed.  Not just a "ha-ha" but a good long laugh.  God, she sounded delightful. I had her on speaker, so my mother could hear.

My mother is fully aware of my proclivities.  They are another thing my lesbian friend and I share in common.

When I got to the restaurant, the girl who took my order was indeed young and very cute.  Her eyes sparkled when she handed me my order.

I wanted to believe her.  I wanted to believe I could make her night.  Rather. . . it was sushi for one, and it was spitting rain so I couldn't even eat it outdoors.  Friday night with a tray full of food, two bottles of sake and a new bottle of scotch. I ate before the television.  Then I read.

Around nine, I decided to watch a movie.  I spent a long time scanning the various pay channels looking for something that would interest me.  Though I had seen it before when it came out, and though it was not a good movie at all, I rented "The Rum Diary" with Johnny Depp and Amber Heard based on the horribly failed novel of Hunter S. Thompson.  This is where the Heard/Depp romance began.  Heard is only in the movie a little bit, but holy smokes!  It is prescient of all that was to come.  The similarities were amazing.

But the movie was overtly about Thompson's obsession with the horrors of the failed American Dream.  He sold us all on that.  Well. . . those of us who read him, anyway.  But he was wrong.  Greed isn't American.  It is historical and universal.  It is part of the human genetic makeup.  It is Biblical, the serpent in the Garden and all that.  It is Egyptian, it is Roman, it is Greek.  It was the rub between early hominids and the great apes.  Lenin pointed it out before Fitzgerald and Thompson, and each of them, for all their proselytizing, enjoyed the Good Life.  BoBos in Paradise.

But yea, the serpent is in the garden.  I'm sure gas will be $5.00/gallon soon and you won't be able to afford an avocado.

I have ideas about what has happened, but for today, at least, I'll keep them to myself.  It is a rainy Saturday.  Storms are in the offing.  There will be no photography today.  It will be a dour day of cleaning the fridge.  Perhaps.  If I can psyche myself up for it.