Fuck yea, I did it again.  Actually, I did this weeks ago.  You are looking at a very fine example of X-Ray film that has been double exposed.  How I screw this up so much, I don't know. . . which is obvious.  There is, it is becoming quite clear, something very wrong with my brain.  The process is really very simple.  Put the film holder in the camera, pull the dark slide out, expose the film, turn the dark slide around so that you can see that you've exposed the film, put it back into the film holder, and take the holder out of the camera.  I think even the kids working at my local grocery store could get that process down.  Maybe.  O.K.  It might be asking a lot of them, but it shouldn't be such a problem for the likes of me.  You will recognize each of the images captured here, the bus and the J.J. something building.  But this photo isn't all bad news.  As I have said, it is a piece of X-Ray film shot in the Liberator hand held.  This is remarkable given that the films speed is only ISO 10.  That is really, really slow.  It takes a lot of light to capture a picture.  That can either be quickly or over a longer period of time.  Holding the big old Liberator, though, it needs to be quickly.  Here, the images look sharp.

The other piece of good news is that I was able to develop it without scratching it.  I can't develop it in my usual developing tank because X-Ray film has a photosensitive coating on each side.  I can't even begin to figure out the usefulness of that.  But the result is, if anything touches the backside of the film in development, marks will appear on the developed negative.  Soooo. . . I had to use my darkroom tent.  I've had it now for what?  A month?  And it has just been sitting in the garage this whole time.  Using it just seemed daunting.  I've been shooting film that I can develop in the daylight tanks, so I haven't needed it.  But yesterday I decided to develop some glass plates in trays, so I thought to try the one holder of X-Ray film I shot.  I can do that safely with a red light on in the tent because the film is only sensitive to green and blue light just like the glass plates.  No guessing.  I watch the image appear and decide when to pull it from the developer.  I was hesitant--very hesitant--but finally got everything ready.  Everything worked as it should. 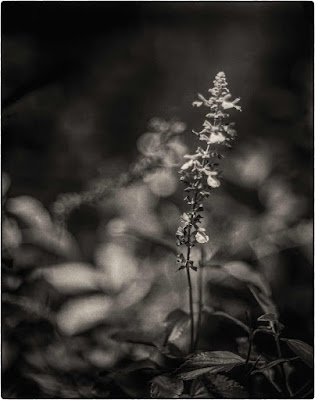 I might as well show you a "success" from the day.  This is one of the flowers in my garden shot on a glass plate with my view camera and a barrel lens (that means no shutter).  All I can do is pull the cap off the lens and put it back on.

The glass plates, like the X-Ray film, is very, very slow.  But I have tools.  I have lots and lots of tools.

Today I want to play more with X-Ray film.  I want to shoot a lot of it.  While I'm at it, I might as well shoot the glass plates, too.  They take the same sort of preparation and the same manner of development.  More experiments to fuck up, I guess.  That seems to be my M.O.

I just subscribed to Teen Vogue.  Who wouldn't?  I mean, really. . . this is soooo Epstein/Maxwell, right?  I'd say there might be a little hypocrisy here, but what the hell?  We might as well enjoy ourselves.  Pictures and words.  Other than my constant fuck ups, it should be a lot like this blog. 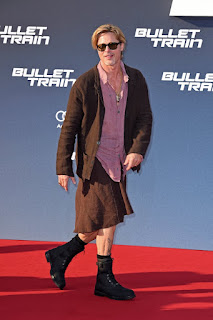 Brad Pitt's no fairy godmother.  Wait?  What?  Of course it is o.k. for a man to wear a skirt.  I've worn a pareo around the house for years.  I've never had the guts to wear it outside the house, but I have sent selfies of my sexy self in them to a select few women.  Brad Pitt is a man, right?  That is how he identifies?  I don't know.  I don't want to be too binary.  But if Brad Pitt is doing it, I can't be far behind.

We're just a couple of "apprentices."  Seems like a Trump tribute, though.  Maybe Disney needs to rethink that.

Now you have a little taste of what my friends used to get every morning.  It's what happens when your life is so very limited.

What will Disney call grandmothers now?  And grandfathers?  And mothers?  And fathers?

I've read that families are choosing Universal in growing numbers.

I've found some trashy reality shows on Netflix that I've started watching.  They are my friends.  I've become a drooling idiot and binge watch them late at night.  Late for me.  After dinner, I mean.  "Selling Sunset."  No shit.  Who knew selling real estate could be so intriguing?  The show is chock full of crazy looking plastic surgery bimbos. Commercial free.  Comes with my Netflix subscription.

I need to prepare to mess up some more negatives today.  I'll need to get out before the heat gets bad and before the rain.  I may get into my car and go somewhere, but that seems so inconvenient and scary.  What if I have to pee?  What if I get thirsty or hungry?  Jesus. . . there is so much to consider.