Criminals to the Left of Me, Hillbillies to the Right It's a black and white picture, and it isn't mine.  My father took this.  I scanned the negative yesterday.  It was so bunged up, I tried to help it along with color and some other manipulations.  Why?  Beats me.  When I was in college taking photo classes, maybe I showed some of my pictures to my father.  He bought the same camera I had.  I don't think he used it much.  Sending film to a drugstore and getting back those shitty black and white prints they made must have been disheartening.  Except for taking pictures of people, but that is difficult.  If it was easy, he would have had her naked.

After working on a few of his photographs, I went down the rabbit hole looking up relatives on my father's side of the family.  I am not in touch with any of them.  I haven't been in touch with any of them for over forty years.  There is not much left of the family I knew.  People just don't live very long on my father's side.  Making it to sixty is a major feat.  So what I found mostly were The State vs. People on My Father's Side of the Family legal documents and obituaries.  Women lived longer, mostly women who married into the family and didn't have the bad genes.  I'd say the genes are bad in many ways.  There are behaviors I can't help I imagine.  I found some Facebook photos of second cousins who are younger than I am, but not by much.  It didn't cause me any regret.

With little regret other than I wasn't born into the aristocracy.  Oh to have had a silver spoon!

Q was shocked at a few revelations yesterday.

Not really.  I voluntarily "orphaned" myself.  It was better that way.

Now. . . the profound aloneness.  I looked at those family photos of my Facebook relatives with their awful clothing, the idiot children and grandchildren, the family gatherings and the stupid smiles, always celebrating something common as if it were awesome. . . .

I guess I wasn't born for it.

I could do it, you know, if I were royalty of some sort and all the family gatherings were in places I can't afford to go, if all our photos looked like we were Kennedys or even Hiltons.  But Jesus Christ. . . even money can't save some.  Can you imagine being in family gatherings with the likes of Elon Musk?  No, not even for money.

My dad's side of the family was interesting mostly in a criminal way.  Beyond that, they were just a bunch of people who all liked Harleys.  Take away the danger and criminality, and all you have left is a crowd who look like they stormed the Capitol building. 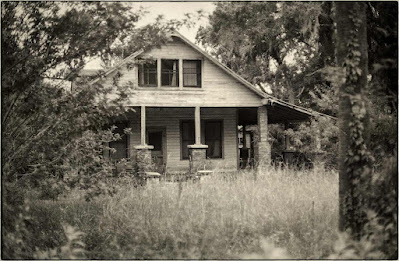 There were photos of abandoned places on that roll of film, too.  Pop had an artist's soul.  He could draw but didn't.  He could paint, but didn't.  There wasn't much time for that after work.  He read a little.  At one point, he just decided to quit working and load up his VW van and travel.  That worked for a minute until he got a job offer he couldn't refuse.  Dad had itchy feet, but he worked until he died.  I guess I decided not to.  That's what I decided.  But sometimes when the apple falls. . . .

I took my mother shopping all around town yesterday.  Her neighbor's birthday is Friday and the old gals are going to celebrate.  She will be 97.  I bought a bottle of nice champagne for them to share.  I took my mother around to put together a little gift basket.  They invited me to the party, but the champagne will have to be enough.  Maybe.  By Friday, I may feel obliged to go for a bit and be their boy toy.

After carting my mother around and then sitting with her and splitting a beer, she whined when I said I had to go.  Some parents see their children once or twice a year.  WTF?

Today I am scheduled to go to the now infamous museum to see what is on display.  It won't be Basquiat.  The FBI has those now.  It's o.k.  I already saw those fakes.  I've scrolled through the current show on the museum's website and don't think I'll be in love with it, but I told my friend I would go with her, so I will.  She never wants to stay long anyway.  She pretty much flies by the art without much lingering.  I think she is trying to prevent me from playing dosun again.

And so, I'm pretty sure this will be another day without photography unless I sit down at the computer tonight and cook up more of the ancient world.  Photo archeology, I guess.  The old family photo.  You know. . . like Bukowski said--all the assholes in the world and mine.

Speaking of which. . . there are plenty to go around.