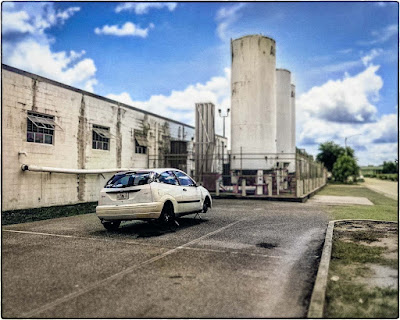 First you take a picture, then you put it into a computer and muck about.  Is it still a photograph?  I think not.  At that point, it becomes something else.  What?  An artifact, I guess.  It doesn't matter really.  I was just thinking about it after reading this article on an AI influencer in South Korea (link).  The definition of "real" has changed.  Or has to.  When the created thing isn't "real", I mean, but exists. . . .

Well, that's something for another time.  It's a rabbit hole if you want to go there.  I was about to apply the term to gender identity, etc.  Nope.  Not going.

This photograph is virtual.  It is not real.

The virtual world is captivating, though.  That's why kids don't go outside anymore.  Nature is messy.  It even seems boring.  Growing up, I would lie on my back and watch clouds make shapes and faces.  Can you imagine?

The clouds were real.  The faces weren't.  Were they virtual?

I'm not judging, not saying one thing is better than the other.  They are.  That's all.

I've been reading about Chinese rockets and where they fall.  There are more rockets than ever.  Every country is sending them into space.  It is strange to me, however, that nobody ever talks about the toxicity of these things.  How much toxic bullshit goes into the atmosphere when they are launched?  What is it composed of?  What happens when they blow up?  When they crash?  Of course the government is exempt from telling us.  But SpaceX?  Are they covered under that blanket?  Do you think they are green?  Are they making rockets that are electric?  How dirty is a South Korean rocket?

Every time there is a launch, I put tin foil in my hat.

I didn't move yesterday.  It was the loveliest of days, but I didn't open the door until very late in the afternoon.  I'm still wearing the clothes I wore on Friday.  I kept thinking to go out and take a long walk, but I napped and read.  Then, near dusk, I made a simple meal.  Color coordinated, I told my friends.  Afterwards, I collapsed onto the couch for a night of silly t.v.

I hope to do something today. . . but I have serious doubts.