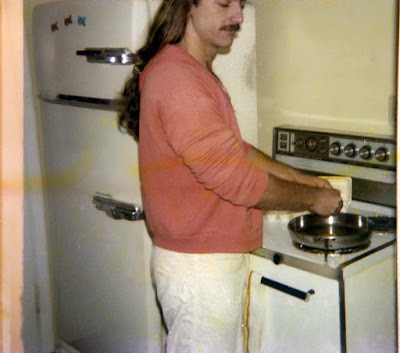 I found some old negatives in the bottom of a box a while ago.  They were tiny ones from one of those 1970s cheap plastic cameras that people had.  Usually, a drugstore developed the film.  I decided to scan the film yesterday.  What a bonanza.  I don't know how I ended up with them.  These were from my girlfriend's camera.  Apparently it had a little window that you looked through to frame the photograph that had nothing much at all to do with what the camera lens was actually seeing.  Still, it was thrilling to look at the previously unseen photographs of family and friends.  There were not so many pictures taken back then, of course.  Yesterday, I felt I was on an anthropological mission.

That was after picnicking with mom, of course.  I wanted to get a bunch of barbecued wings, but the best place to get them that was close to me was closed.  I decided we would have Popeye's chicken instead.  I bought some Cole slaw mix and a six pack of beer, picked up eleven pieces of chicken, and headed off to my mother's.  It was hotter than Hades yesterday afternoon, however, with no clouds and no rain, so we ate inside in the cool, dry air.  We were partying.

My college roomie texted yesterday.  He said that people had been shooting off fireworks in his neighborhood since Thursday night.  He said it all sounded like it was right outside their window.  He's a funny Bolshevik.  He lives in an expensive gated community with a bunch of dirty republicans, so I told him that no, that was not happening here in my little hamlet, that people behaved rather decently here. 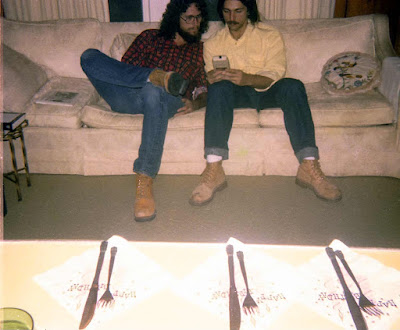 He was also my bandmate.  We chatted about the band and how large the crowd was when we played on the 4th. . . thirty-eight years ago to the day!  Real patriots were we.  Here we are ahead of the curve playing a little computer football game.  I should tell you it is a chess game, but it wasn't.  First came Texas Instruments amazing calculators, then, a couple days later. . . handheld football.  We were ahead of the curve, he and I--this was before Pacman had been invented, though it functioned much the same.

It would be another twenty-some years before any of us had home computers.

I had gotten my roomie a job at the factory, so we had a little cash.  Not much, but more than we had pre-factory.  It would still be a few years, however, before we were able to afford electric guitars. 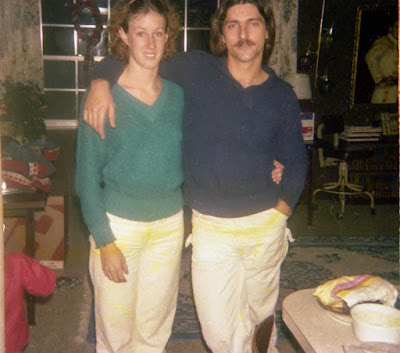 Here's the girl with the camera.  The pictures on this roll of film span many months.  As I say, people didn't take so many photographs back then.  This, apparently, is from a Christmas holiday.  Look at us--we practically match.  I remember that sweater.  I loved that sweater.  And painter's pants.  I think I need to get another pair of painter's pants.  You know, Bolshevik style.

Youth is endlessly fascinating--especially one's own.  These photographs are all we have to defend against the ravages of time.  They are especially precious for being so few.

I did manage to take a couple photos with my big-ass Liberator camera yesterday.  I'll take a couple more today, and then I will process them.  I'm going to take the camera with me to lunch today with C. C.  We are going to eat at a big outdoor place on the lake where, a few years after this picture was taken, I took sailing lessons and shortly thereafter bought a sailboat.  Crazy coincidences, the fellow who owned the marina was a friend of my college roomie's father.  They were in a bowling league together.  Imagine that. Bowling leagues, I mean.

I have much to do before I go to lunch, however.  That is--a lot for me who does hardly anything at all.  C.C. has just gotten back from his monthlong journey from Paris to Ohio to one of the fancy resort Islands off the coast of Georgia.  His tales should run the gamut from sophisticated dinners to fried whistle pig with the hillbillies.  I'll be able to fill him in on what he missed right here at home.

Just a quick sad note here on sobriety.  Q Facetimed me yesterday.  I told him if I were to talk to him I needed a drink.  To my surprise, he was sitting with a glass of wine in hand.  Oh, man. . . how the hopeful are fallen.  Wickedness is a difficult thing to forego, and now, six months in, his sobriety is out the window.  His sponsor has seen this many times before I'd assume, but for those of us not intimately connected to "the movement," it is startling.  Poor, wayward Q.  Money, family, and success wasn't enough.  He had to succumb to the old demon rum, so to speak.  There is never enough happiness for some people.  They're just born bad.

I'll take the high-hat from this degenerate no more.

That kid in the pictures was an adventurous traveling fool with a tremendously romantic heart.  I need to channel him today.  But it was a whole different deal back then.  Everybody wasn't everywhere.  You could book a flight the day before you travelled then walk in and get a room when you arrived.  Technology seems to have ruined all of that.  Travel needs to be planned and booked well in advance.  There was much great about the pre-digital world.

But that kid had a great a big advantage.  He was able to throw a bag down anywhere and sleep on the floor.  Yea, I'll try to channel that kid today.  I watched this movie last night and was ashamed.  I need to get the hooks out of my ass and carry on.