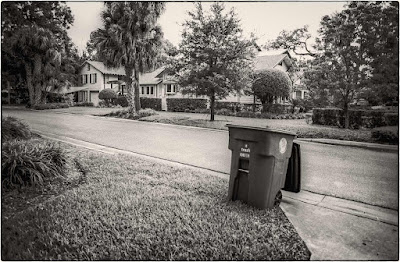 Today is trash day.  This is what it looks like here at my home.  The lone, open garbage container, the quiet, empty street.  I don't know why, exactly, but the image fills me with a sort of profound peace and a lonely emptiness at one and the same time.  Yup.  That's why I like it.  That's why I think it is a good picture.  Routine and ritual, two sides of the same coin here conjoined in a mundane and significant way. We do this well over seven hundred times per year.  Taking the can to the curb is a chore, of course, but it yields a good return.  I tip the garbage men at the end of the year and at other times when they take questionable items away for me, mostly construction materials.  Whenever they see me, no matter where, they honk the horn and wave.  They are part of my life, both familiar and anonymous.

I guess I am still like a kid.  Routines hold great importance.  Sacred times, sacred places.  Holidays always loomed large.  The rituals were performed by the calendar, by the season, and they always looked as they did the year before.  Children count on such things.  Halloween is black and orange, Thanksgiving orange and gold.  Christmas is red.  There were fall festivals at school with homemade games and rides.  There were community gatherings with fried chicken and watermelon.  There were fish fries.  And there were the seasonal sports.  Fall brought football, spring brought baseball.  Basketball was a bit problematic overlapping as it did.  But you counted on it.

Postmodern theory, politics, and ethics dealt death blows to much of that.  Greed, too.  Cable t.v. killed community viewing and the group chatter that followed the next day.  We all waited for "The Wizard of Oz" the way we waited on the county fair.  Friday night's spooky movie on "Theater X."  Saturday morning cartoons.

These were touchstones.  It was all ritual that made life seem stable and safe.

What's left, by and large, is garbage day.

I was still feeling ill yesterday, four days after the vaccine.  I didn't leave the house until it was time to go to mother's for dinner.  She cooked, thank god.  Sunday dinners are a ritual for us, too.

When I got home, I took some pain relievers, watched a little t.v., and went to bed.  There are certain things one cannot avoid thinking of as one gets old that are discomforting.  I took a Xanax, too.

I should not say I did not leave the house, though, for I stepped outside for a few minutes.  I had set up my 4x5 camera and was practicing the movements as I said I should.  But I am not a patient man.  I am an approximate man.  And so, without so much practice, I wanted to make some pictures.  I put in a film holder and took a photograph of the interior of my living room.  It was not an interesting composition, but I used the tilt and swing to try to bring disparate parts of the room into focus.  The room was dim, and I made a twenty second exposure.  I had never made one of these large format long exposure photos before. It was nerve wracking.

I decided to take the camera into the yard.  It was hot and I was ill.  I made one photo and went back inside.

I decided to develop the film.  I put on some music, an Apple station made for and recommended to me.  "Laura Veirs and Similar Artists Station."  It was good and full of music I hadn't heard before.  I often went to the computer so I could  "like" a song.  I "liked" a lot of them.  One came on that gave me special pause--"Moon River."  It was a beautiful rendition, I thought, and it made me sad.  Who hasn't seen "Breakfast at Tiffany's"?  It is one of those films that women I like adore which should be a bit of a warning, I think.  Two lonely, marginal characters.  Huckleberry friends.

Another touchstone, perhaps.  Another ritual.  There are two kinds, of course--the sacred and the profane.