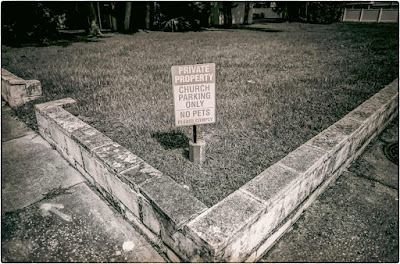 This is an example of the kind of pictures you take with a smaller camera that you would never make with a large format camera.  They are different species, really.  They are in the same family but maybe not even the same genus.  So, yea, the walk around camera has its uses.  The same is true of black and white and color.  I'm going to go back to everything.  I don't think I've "mastered" the big cameras yet, but I have become fairly proficient.  I heard a large format photographer on YouTube the other day say that he practiced the movements of his 8x10 camera for many, many hours in his home before he ever took the camera outside by putting post it notes on different parts of the wall and working to frame, blur, and focus them as he desired.

I could probably benefit from that.

But I am also carrying a camera with me wherever I go once again.  I DO love the feel of the Leica in my hand.  I DO love the sound of the shutter and advance on that big Canon EOS film camera.  I DO love taking photos with my Hasselblad 6x6.  And I have gotten very proficient at working with different films and chemistries now.

So even if I haven't been making great pictures, progress has been made.  If only I wouldn't always find out about things after they happen.

There was a big python hunt in the Everglades earlier this month.  I found out about it the day after it was over.  Can you imagine the photos I might have made with my Liberator?  No?  Oh. . . you mean because I haven't made any yet?  Well, yea, there's that, but I could, you know.  I think.  I could at least have tried. 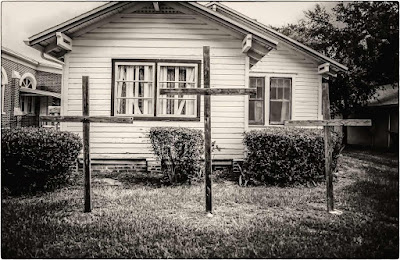 This was to be part of a triptych with the first photo and another of the church itself.  The photo of the church, however, is still in the camera on a roll of film that is only half done.  36 exposures is a lot to go through.  At the end of my walk, the church was the first shot on the new roll.  Triptych still to come.

But it is Sunday, and I thought maybe these were apropos.

I think it's Sunday.  I thought yesterday was.  I was still sick with the reaction to the booster shot.  I have lost track of time after three days of feeling achey and tired and creaky.  If I don't feel better today, something is wrong.  I worry that I may have gotten the virus one day and the shot the next.  That definitely wouldn't be good.

Having done nothing for three days, I have nothing but the inside of my head to write.  No bueno.  Things are not so good in there.  I'm not all Psalms 23:4.  I fear evil among any number of other things.  My mother says that if it weren't for the news, we'd be happy.  I don't think she is referring to reruns of "Gunsmoke."  We are inundated with bad news from morning to night.  The future looks ominous.  And it's inescapable.

I'd build a "Way Back" machine, but I had some dreams about that last night.  It may not be a direction I want to head, either.

No wonder everyone I know has started eating mushrooms and experimenting with LSD, MDMA, etc.  The Xanax has not been enough.  All the straight arrow kids are turning into mystical adults.

That surgeon you see on Wednesday may have spent his or her weekend at an ayahuasca retreat.  Times are strange and getting weirder.

"The last to go shall see the first three go before her!"

To end on a high note, I think there is an animal living under my house again.  It smells like I need to empty the trash.  Why?  Why my house?  I've sealed up the vents, but they just dig under the screens.  I think I'm going to have to hire a "specialist."  I can't deal any more.

But wait--the mechanic took all my money!  I guess I'll have to give it the old college try once again.

"The old college try."  You know--put on the freshman fifteen, drink to excess, eat shitty food, and experiment with sex and drugs.  Now that I could go for.