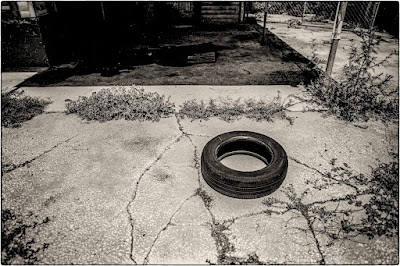 I haven't slept this late in many, many years.  I opened my eyes to a sunlit room, but closed them again.  It was well past eight when I finally forced myself up.  Too many late nights?  Too many parties?

As the days grow shorter, I'll be heading to bed earlier.  You wait.  You'll see.

The weird part of it all is that I didn't leave the house yesterday until after five when I headed to my mother's house for dinner.  When I tried to open the door, it was locked.  I hadn't even opened the door since the night before.  I had done nothing and then took a nap  from which I seemed never to have awoken.  I think I need to radically change my life.  "Keep moving or they'll throw dirt on you," I used to tell people.  I didn't realize at the time that you could be buried as well in the settling dust.  I have become fatally lazy, I think. . . far too sedentary.

I'm like that picture, though.  I've got a bad wheel.  I'm still limping and unable to walk very far on my injured right knee.  Any big city trips I had imagined are put on hold for the time being.  "Which ones," you ask?  You know.  All of them.

When I got to my mother's house, we sat out and talked a long while before dinner.  Nothing, really, just the usual prattle.  When we got dinner started, I said I was going to thrill her by turning on a football game.  Boy, she was really excited.  I turned on the Chiefs/Cardinals game.  To my surprise, it was in Spanish. I switched the channel to the Packers/Vikings game.  Same thing.

"I didn't do anything.  Try another channel."

I did.  Everything else was in English.  I turned back to the games.  Spanish.

"You know what today is, don't you," my mother asked me.

"Huh.  I hadn't even realized.  I haven't seen anything about it in the papers or on the news.  I guess nobody cares any more.  Is that why the games are in Spanish?  Wow.  This is weird.  Are they just trying to get people to vote for Trump?  I mean. . . I don't get it."

Maybe I've been put under a spell.  Not leaving the house, games in Spanish, not knowing it was 9/11, and sleeping like I was drugged--I feel spellbound and confused.  I've drifted away from the old reality on somnambulistic waves into some foreign sea.  Many readers of this blog are European.  Do you ever turn on a football (soccer to us) game and it is being broadcast in Arabic?

I'm sure Houellebecq has something to say about it.

Western reports of the war in the Ukraine are touting Russia's ineptitudes.  I think it unwise to lead people to unrealistic expectations.  It is like doing a victory dance in the end zone of a game you are losing badly. God knows what Putin will throw at them next.

I should take a tire around town and photograph it in various places.  I mean, I like that photograph.  I could do an entire series called "Tired."  It could be a metaphor for me just lying around, worn out, little tread. . . .

O.K.  I'm already a couple hours behind today.  The day will be compacted.  I need to quit napping and start. . . I don't know. . . doing something.

But as I always say--tomorrow.  There is nothing that can't be done tomorrow.