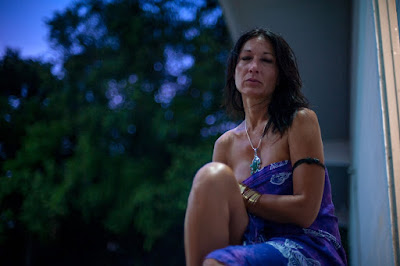 Early days of having the studio.  This woman came to make pictures. I didn't know what I was doing yet.  Pre-Lonesomeville, I was making up late 19th century anthropological shoots.  I would just grab "primitive" things and make up a picture believing that those early anthropological photographs were just as "made up" as mine.  I was ready to throw sawdust on the floor and get some chickens.  It didn't work out so well this particular day.  Here we are taking a break, I guess, sitting on the loading dock at the back of the studio in the early evening.  I did as much talking as shooting back then.  I learned much about people's lives.  They fascinated me.  We would often talk for hours and make a few Polaroids.  I was hardly interested in using my digital camera at the time.  Looking back through the old Nikon files, though, I ran across this moody picture.  What great fun I had in that studio, shooting film, experimenting with transfer processes and encaustics, playing music and drinking tea or wine or whiskey, alone in the studio or with someone, working and talking.

And then I gave it up for a girl.  Selavy.  The world changes.  Nothing is ever the same.

I made a stir fry with tempeh last night for dinner.  I was going to make Ili's Famous Poop Bread, too, but I was a banana shy, so I'll wait a couple more days.  After dinner, I had a sliced pear and cheese for desert.  I've been trying many expensive cheeses lately.  They are wonderful and I want to learn about them.  I believe I have a cheese book somewhere around the house, but I think I remember it is only about French cheeses.  I've been loving the Spanish sheep/goat/cow blends of late.  But I really don't know what I am doing.  They are usually of a strong, distinct flavor that requires you to eat tiny portions, so expensive as they are, they aren't really, and eating such small portions surely is healthier.  That is my justification, anyway.  So last night, small amounts of goat cheese on a slice of pear blew up in my mouth.

I'm certain not to be doing something right, though, being a hillbilly and coming to Eurocheese at a late age.

I wish I had made better pictures with this woman.  I don't even remember her name.  There was nothing useful from that shoot.  My fault, not hers.  But I like this snapshot just fine.  It is a perfect document of the evening's collaboration.