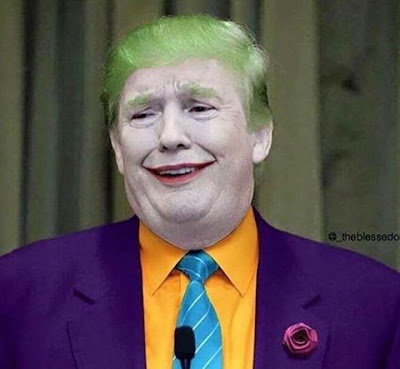 They'll never get this guy.  He's making Commissioner Gordon look like a fool.  He has Batman tied up in the Joker Cave and Robin dangling by his heels from a carnival ride.  He's the gift that keeps on giving.  Every time CNN or MSNBC brings on an "expert" to explain how bad it is for him, he just laughs and slips out through some secret exit.  He makes Teflon Bill (Clinton) look like an amateur.  He's greater than Houdini.  And rumor has it, he will never die.  He's the Greatest Evil since Moby Dick.  He's more vile than Judge Holden from "Blood Meridian."

How does he do it?  He can't be real.  We have to have made him up.  He must be a popular culture creation.

And just like Batman's Joker, half the people love him.  I know they do.  I talk to them.  They tell me.  It doesn't matter what you say.  Nothing matters.  They love their big, fat, Rabelaisian monster.  He's their Hoodoo Man.  They love him the way the Japanese love Godzilla.

Screw you CNN.  Be gone MSNBC.

I live in a cosmos where Bill Barr and Liz Cheney have become heroes of the left. 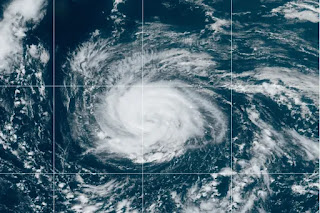 But I guess I'm not finished ranting.  Look at this.  Which hurricane is it?  No?  You don't know?  It's the one they always show you when there is a new hurricane formation.  It's like looking at pictures of sunsets.  They all look the same.  No matter, though.  This is the thing that strikes terror in the hearts of all peoples living near the coastline in the Sunny South.  It's the thing that sends people to the store to stock up on bottled water and canned foods and candy.  It is what sells big generators.

But maybe I just have PTSD from Charlie who stole my family fortune.

To wit: yesterday I had a fellow come from Pella Windows to give me an estimate on replacing a small window in the kitchen of the apartment.  He took measurements and then blithely told me it would be $3,500.  I was instantly ill. Oh God how I wished it was a drinking day.

I will search for alternatives.

Why did I take Home Ec rather than Shop?!  I thought I was being clever, the first and only boy to choose Home Ec at my school.  The boys made fun of me until they saw me eating freshly baked chocolate chip cookies and basking in the attention of my pretty female classmates.  I learned how to make a pillow.  I should have learned how to use power tools.  I don't know how to fix anything. 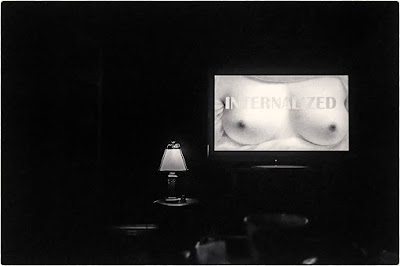 Depressive and depressed, I sit in the night play holding my Leica and watching television.  I watch a lot of art programs on YouTube.  This is one of my Leica play photos I have been taking around the house.  This is what my evenings look like.  I love my Leica, and I guess I like t.v.

I won't feel good until I have taken care of fixing the window, but even then, the Joker will still be at large.  It is hard to imagine being happy.

"At large."  That's a funny term, but it really fits in this case.  The villain is really "at large."