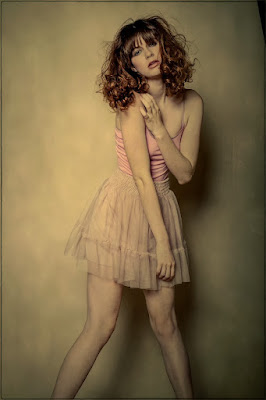 It wasn't all "Lonesomeville" in my studio.  I did other things, too.  Now, I wish I had paid more attention to them.  I wish I had done more of the other things.  But I didn't have a vision for that, no overarching theme.  I hadn't any intention of shooting the kind of images that most models want, those "girl in a dress" photos.  Still, I did some.  I would shoot things for them, but without much passion.  Oh, if I could go back in time.

So we move on.  Uh. . . I don't really have any tales to tell.  Let's see.  I made the navy bean soup yesterday.  I braised the ham hock and the thin slices of pork tenderloin along with sliced carrots and celery and chopped onion and garlic, then put it all in the InstaPot with the navy beans and set the timer for pressure cooking.  Then I grabbed some cameras with unfinished rolls of film and headed out to find something--anything--to photograph so I could try this new film in a new developer.  I drove out of my chi-chi hometown and went down highways to "marginal" places.  I'm trying to be delicate here.  "Rougher" parts of town?  Drug trade centers?  Places un-gentrified?  Disenfranchised?  I don't know.  A place like the one in which I grew up.  A place that can be violent.

I've lost my edge.  An old cripple with a camera limping stiffly around old buildings, broken down tire shops, ancient laundromats.  Every time I stepped out of the car, it seemed, somebody driving by would scream at me.  It happens to me all the time.  It makes me very, very nervous, I can tell you.  You never know what some jerky boy jacked up on meth might do.  I envision some asshole throwing a tire iron at me from a moving car for fun.  That actually happened to me when I was a teen, but with a shoe, not a tire iron.  The car came by me from behind as I was walking down the road.  It was probably doing 35 mph.  Instantly, my shoulder went numb.

"I got him!!!" screamed the ecstatic moron hanging out the rear passenger window.  "I got him!!!!"

So I have history.

I was also attacked by mean assed dogs several times, too, and I imagined someone letting loose their pit bull on me as I creeped around the back of buildings.  Or maybe, as happened to me a few months ago, I'd walk around a building where somebody was sucking somebody off.  Or maybe I'd find two maniacs shooting up.  This all happens.  There was a time when I felt confident, but now I just push myself out there unable to fight or run.  That's a bad combination in these parts of town.  And yet. . . I go.

Thinking about a future project that has been a future project all year, I decided to ask Siri to map me to the location of the city rowing club.  The boathouse was in a big park with a boat ramp and covered picnic tables.  It wasn't picturesque.  The people hanging around the park in large groups were not in pretty bathing costumes and eating on checkered tablecloths spread for fancy fare held in fashionable wicker baskets.  Nope.  Nobody yelled at me, but I sure got the eye.

It was hot and I was becoming miserable.  I did not finish off those rolls.

When I got home, I took a soak in a hot tub and then showered off.  I sat in a chair against a little back massager machine and drank a can of sparkling water.  It was nearing time to go to my mother's.  I pulled the lid off the InstaPot and tasted the broth.  Blah!  The recipe I was following said not to salt the soup as the ham already had a lot in it.  Nope.  I added more of every spice--salt, cayenne pepper, black pepper, crushed red pepper--and dropped in handfuls of baby spinach.  O.K.  It wasn't a proper navy bean soup made from scraps.  But when I served it at my mother's, it was awfully good.

I've added another soup to my repertoire.

I was happy to open the Pinot when I got to mom's.  It was every other day.  I think this is going to work out fine.  When I got home, I poured a whiskey, but I didn't have as many of them as I might have.  And when I went to bed, I slept all the live-long night through.

Now today is a busy day.  The yardmen came early, and I scrambled to get them their money before they left.  I need to get the sheets in the washer and then put away all my paraphernalia before the maids arrive.  There is a trip to the gym, then at two a rep from Pella is coming out to give me an estimate on replacing a window in the apartment.  I want to finish up those film rolls and develop after that.  And, time willing, I want to start culling photos I might put on a website.  Then there is mother's and the making of a new dinner and a night of reading with tea.

But how about that picture?  Give me my studio back and I will do it all again.