A Broken Manliness in the Hands of an Angry God 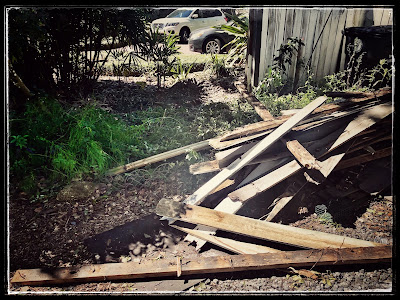 I'll admit this pile doesn't look that impressive in a photograph, but it represents 36 feet of wooden fencing that I ripped up. It is really 18, but there was fencing on both sides, so. . . . I did this with nothing more than a crowbar and crippled old man muscle.  I'll spare you another version of "Big Balls in Cowtown," though. 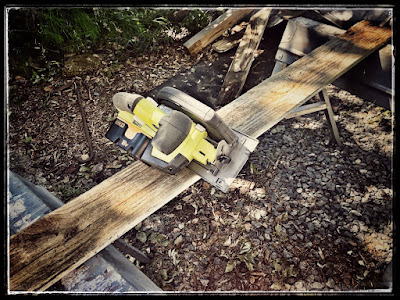 Then it was all about the power tools.  My friends never let me around power tools.  But I had bought a circular saw thinking I was going to build my own deck.  It had never been opened.  It took me half an hour to figure out how to get the saw blade on.  I still haven't figured out why I can't cut further than about four inches before the saw quits moving.  I'll YouTube it before I go out to finish the job  in a bit.  It is sure to be something simple.

The battery died around 3:30.  The saw's, not mine.  I cleaned things up and made a rum and coca-cola and sat to contemplate the mess.  There was a breeze from the west where the fence has always stood.  I have never had that breeze before.  The fence was there when I bought the house in 1996, but now I wonder why?  I will not replace it.  Indeed, I may tear more of it down.

While I was drinking my Cuba Libra, I turned toward the house and got a surprise.  There, sitting quietly watching me was the little feral cat.  She had survived the storm.  I went inside and got her food.  She was a happy and hungry kitty.  When she finished eating, she enjoyed the new vista, too, sitting in the dirt beneath a plant looking back at my house.  I think she approves.

After my drink, I took a shower and made another for the trip over to my ma's.  It had been and was the most beautiful day, bright blue with a very few puffy cumulus clouds.  Daytime temps in the 80s, mid sixties at night. It seems a cruel irony to have such beauty when so many now own homes that have been destroyed.  My mother keeps saying how lucky we were, and it is true in the main.  Many of her neighbors are still without power.  Just a few miles away, thousands of homes are still underwater.

After a manly day in the bright sun under blue skies, I wanted to grill a steak.  I bought a big ribeye and some asparagus which, along with a sliced potato, I grilled on the high rack as I sizzled the meat.  I made enough for two and had company eating on the deck as the neighbors strolled by, each kidding that they would join the party.  Things were good, but there is still a strange weirdness to it all.  We all shake our heads like survivors of an airplane crash, grateful but horrified.

Steak and asparagus and potatoes and beans and a bottle of wine.  A quick cleanup and then the whiskey and later, of course, a palate cleanser of Ben and Jerry's Chocolate Fudge Ice Cream.

My fashion editor friend was in town during the hurricane having come here from the coast with her daughter to be safer.  Her St. Pete home, however, got less weather than we did here.  I had dropped her a rare line as the hurricane approached wishing her and her family well.  We corresponded over the course of the storm.  She was sweet and I had to keep myself in check in my responses.  Now she has returned home and the line's gone dead as it should, I guess, but knowing she, too, shares sweet memories made me happy.

Yes, this has been a bittersweet storm.

The coffee is gone now and I must put on my leather gloves and get back to work with fingers and wrists that ache from manly toil.  Every time I do something like this and then pick myself up on my shoulders and parade myself around, I realize that people do this every day, eight hours a day. . . and but for a twist of fate, that well could have been my career path, too, as it was for most with whom I grew up.  Such labor will make you a very different fellow.  It was labor like this after I graduated from high school that inspired me to sign up for classes at the local college.

"And that has made all the difference."

My biggest regret in life was that I wasn't "to the manor born."  Selavy.  I'll take what I can get.

For some reason, though, the last line of James Joyce's "Araby" come to me now.  Perhaps it is my foolish romantic heart and my own silly vanity.

"Gazing up into the darkness I saw myself as a creature driven and derided by vanity; and my eyes burned with anguish and anger."

Yes, as the good Bible teaches us, vanity vanity. . . all is vanity and chasing after the wind. Or in this case, running from it.

"And my stomach kind of fell as I felt how hard the world would be for me thereafter."

That is the last line of John Updike's "A&P." That is the difference between Updike and Joyce. Either way, though, I feel myself the buffoon. Still, it has been one hell of a ride.
Posted by cafe selavy at 9:45 AM