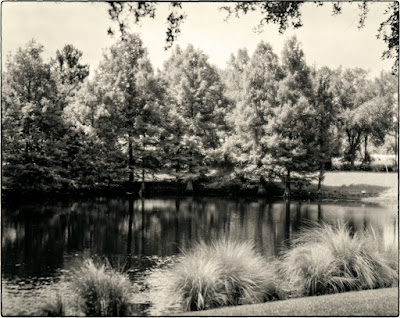 Not certain what I will write this morning, so I've picked an innocuous pastoral scene for this post.  I suspect, however, that the post will not follow suit.  I am a prickly pear of a man lately, flipping people off in traffic, saying the wrong things to my buddies at the gym.  This doesn't seem to be something I can control.  It feels chemical.  It is probably some old man hormonal thing not yet understood.  Or maybe it is well-understood and I am unaware.

The whole "psychobabble" argument has lingered with me.  Just a quick observation.  We do not perceive things that we haven't words for.  In the main, anyway.  Desert people (I forget which ones) who lived in a horizontal world had no words for up and down.  When children of that tribe were given building blocks, they always arranged them in flat labyrinths without stacking them.  How many words do Eskimos have for snow?  Are there really that many kinds of snow?  They think so.  They see "wet snow that falls quickly and melts on the ground" as one type, for example.  O.K. I just made that part up.  I don't feel like going back and researching this today.  But you get my drift.

So part of academia, the part that makes you money, is creating perception, and one way to do that is to create new phrases and portmanteau words.  They are much like advertisers in this.  "Brunch" was probably created by Don Draper.  "Deconstruction," everybody's favorite new word in the last thirty or so years, was the creation of that failed academician Jacques Derrida.  He made his fortune from that word.  And now everything from food to clothing is "deconstructed."  People use the word completely wrong, but that's o.k.  It's still money in the bank.

To wit: syndromes.  I won't name any here for fear of insulting anyone in particular.  In my last relationship, though, I learned many.  There are some unproven "theories" in the social sciences that are provocative enough to make it to the classroom.  Five Stages of Grief, for example.  Anything with steps is good for the public mind.  It takes away the uncertainty.

"I'm stuck at denial and I can't progress until I get through this."

And with a wave of the pen, the invisible becomes visible.  You can see it everywhere.  "Gaslighting" and "narcissistic personality disorders" are two of my personal favorites.  Put those in your vocabulary toolbox.  You'll be a hit at the Dysfunctional Cocktail Party of Life.

Concepts don't exist until we have vocabulary for them.  Sometimes, as in mathematics, such things are transformational and lead us to a greater understanding.  Other times, they are deformational and lead us elsewhere.  Remember when people were constantly experiencing "deja vu"?  You need to be a little older to remember that one, I guess, but once the phrase began popping up in casual conversation, everyone seemed to be having that experience.

"I don't know.  I had this eerie feeling that I'd been there before, that I had already said these words and had this conversation."

Deja vu kind of fell by the wayside.

"Pop psychology approaches are often characterized by an emphasis on personal feelings, the latest trends in popular culture, and self-help techniques. These approaches may not be scientifically supported or researched but have become popular with people who want to improve their mental well-being."

Having dated women who were "in therapy," I can tell you for certain that it works.  After they left me, I'm pretty sure they were fit as a fucking fiddle.

O.K.  I told you I was prickly.  I'll catch hell for this, I'm sure, and I'll lose some friends--all of whom will say I have "anger issues."  But you know, it is just part and parcel of my "toxic masculinity."

Or as I like to say, what makes me so goddamn charming.

My dead ex-friend Brando had his own way of dealing with problems--"I'll get new friends," he'd say.  And after he stiffed me and my pals for many thousands of dollars, he did.  I DO think that maybe the courts should have mandated counseling for him, not to help him, but to torture him.  Perhaps he would have come to see the error of his ways.

Reading back over this post, of course, I can see mine.  A rant.  Unsupported claims.  Obvious issues.  Yep.  It's all true.  It's probably hormonal.  Too many broken bones.  Progressive arthritis.  Hardening of the arteries.  Slight dementia.

Jesus Christ, I swear I've written this all before.  Seriously.  I'm having deja fucking vu!