Writing Works for Me 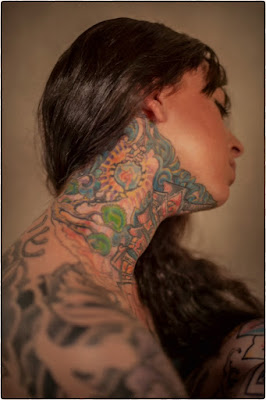 "The world's gonna fuck you.  All you can do is take it up the ass and soldier on" (Frank Gallagher, Shameless).

I heard that last night after a battle with my fashion editor friend who gave me a lashing over my dislike and distrust of therapy.  She threw me into a group--old people.  That is not exactly what she said, but it is what she said.  I'm from a "generation" who resisted talking about their problems.  I'm going to quote her here without permission and risk suffering her wrath.

"It's easier to believe it has to be this hard to be human, so they bury shit, suppress it. Everyone hurts."
Hey, I said, I don't bury shit.  I'm WAY too open, I've been told.  But then I realized something.  I've been writing every day for as long as I remember.  I have billions of journaling words.  I have millions just about her.  And I have this, an anonymous blog where I can write in a wily trickster voice, a foolish sage.  Or a Sophist.  Who am I to say?  But, I guess, this is my form of therapy.  Talk therapy.  Thank you for listening.
I guess it would be better called Writing Therapy.  Jesus--I just looked it up.  It is a "thing" (link).  Writing has been my Adler, my Jung, my Freud.  I'd recommend it for everyone.
Yup.  I concede.  I'm recommending therapy.
Still, the generational thing pisses me off.  I'll let her know today in a strongly worded letter.
Curiously, earlier in the day, I had been thinking about the meaninglessness of life.  A search for meaning is foolish.  One imbues it with meaning, of course.  We create inviting environments, make luscious meals, mark time by celebrations and events, but none of that is universal let alone divinely inspired.  And in the end, it is simply a horror show.  It won't be fun.  So yea, I agree with Frank Gallagher--just take it up the ass and soldier on.
As Shakespeare knew, pearls of wisdom often come from the mouths of fools.
On the other hand, you could get tattoos.  There's a real commitment there.  The girl in the picture still had a way to go.  She was going to cover her entire body, she said.  Aren't tattoos expensive, I asked?  They are, she said, but she had a boyfriend who was a tattoo "artist."  An artist, I said.  Hmm.  She showed up at the studio with some other tatted friends.  I asked her during the course of photographing her if she ever had regrets.  She got solemn and said sometimes she just wished she could close her eyes and make them go away.
We live with the choices that we make.  I'm not sure if taking responsibility for them or blaming others is the way to madness, but it probably doesn't matter.  We are all mad as hatters, aren't we?
Some of us choose to run with the herd while others of us tend to run away.  And, as Frost so ironically wrote, "that has made all the difference."  People misread that line of the poem quite often.  Frost's tongue was deeply in his cheek with that line.  All roads have been travelled.  We simply privilege or regret the one we are on.
So there you go, Sugar.  I'll not send that strongly worded letter after all.  Therapy worked here.  I got it all out.  And hopefully, you will never read this post.
I still love you, of course.  I surely do. 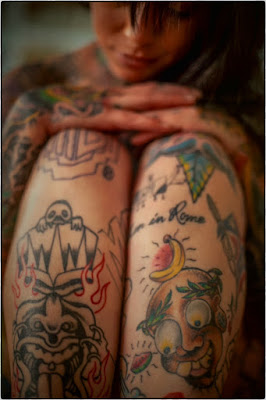