A Face to Meet 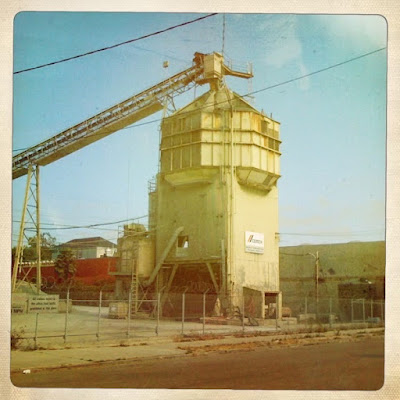 I went to the Union Social in the factory town last night, but that's the end of the story.  The day started with a visit from the a.c. repairman.  The tenant keeps saying that when the a.c. unit comes on--at night!--the air smells "wet."  I've gone up, turned the a.c. on, and nothing.  The a.c. guy came and turned the a.c. on, and nothing.  He checked the system and said everything was fine.  I am awaiting the report from the tenant today.  Surely the air smelled "wet" again last night.  Surely.

When the a.c. guy was finished, I sat down to eat some breakfast before going to the gym, but I got a text from my beautician: "Can you come at 11:00?"

Of course I could.  The longer I would have to let my hair "naturalize' before I meet up with my new old friend on Saturday, the better.  I don't know, actually, if it takes time for my hair to look better after getting cut or if I just have to get used to looking at it.  Either way. . . .  I told my beautician that my Saturday girl was only twelve years old and that I needed to look no older than someone in their late 80s.  She said she could only do my hair.  She is never shocked by my proclivities.  We've known one another for over twenty years.  Since my yardman quit doing lawns, she is my longest standing relationship.  When she started cutting my hair, she was a red-hot twenty-something who could make your knees buckle.  So was I.  O.K.  I wasn't a twenty-something and I couldn't make your knees buckle, but I was something better than Current Era.  Oh those fucking beauty parlor mirrors are harsh.  Can they be true?

Many hours later, she had done what she could.  Now it was my turn.  I headed for the gym for an hour of cardio.  I figured I could probably lose at least ten pounds if I really got the old body going, right off the pudgy middle.  I figured to have abs by evening.  So I pushed myself as hard as I could.

When I left the gym, I looked like a sweaty version of what had walked in the door an hour before.

Back home, I was pooped.  I grabbed a little piece of chicken out of the fridge and wondered if I had it in me to go to the cocktail social.  Homeboy that I am, I was beginning to think better of it, but I got a call wondering if I was going to take the train up to the factory town.  I didn't know, I said.  I needed to shower and time was getting short.  I said I'd call back after my shower.  I was feeling tired, weak, and something else, too, but I kept thinking that if I couldn't make a four o'clock train to a cocktail party, I was worse off than I imagined.  So, bing, bang, bong, I was dried and dressed and pouring a whiskey to bolster my resolve.  I called.

The train station is only half a mile away, but we were going to drive there and with afternoon traffic, that would take ten minutes.  I waited.  And waited.  We weren't going to make it.  Then a car horn.

"Jesus, why'd you take so long.  There is no way we are going to make the train."

As the driver jacked the car into a parking spot at the station, my phone fell between the seats.  I couldn't find it, of course.  I got out and began looking under the seats at the mishmash of metal posts and crossbars.  Time was ticking.  Of course the phone was in the most precarious of places.  I jammed my hand between the seats as hard and far as I could.  The tip of one finger could just touch the phone.  Painfully, I pulled at it.  Again.  And again.  My hand hurt.  It really hurt.  Tick-tock, tick-tock.

By the time I got the phone out, a train was pulling into the station.  But wait--it was a Southbound train.  We were heading north.  We scurried to the machine that dispenses tickets, but twice it wouldn't take my card.  We hear another whistle.  We were on the wrong side of the tracks.

"C'mon," yelled my friend.  She was running to the end of the platform to cross the tracks.  I can't run.  I can barely walk on my torn knee, but instinct being what it is, I made a stumble bum's attempt.  Jesus, I thought, I'll pay for this.  Meanwhile, a fellow in a red vest was yelling and waving at us that we couldn't cross the tracks.  We waved back and ducked under the crossing bar.  There was no time to get a ticket, so we ran to the open car door.  Rather, she did.  I had given up running, and when I got there she had charmed the porter into letting us board with a promise to by two roundtrip tickets when we reached the station.

We made it with seconds to spare.

"Jesus, I hope nobody I know saw that!"

"Me trying to run.  They would have gotten their phone out and recorded that.  No shit.  It was hideous."

My friend laughed.  "You were fine."

I was not fine.

The fellow who took my place as factory foreman's wife--wait--that's not right.  He didn't take my place as the factory foreman's wife.  But you know what I mean.  His wife was on the train.  She came over to sit with us and chat as we slipped past the townships along the way.  Her husband was there to greet us when we arrived.  He had dropped off a posthole digger the night before, I guessed, because it was leaning against the door in the morning when I went out to meet the a.c. repairman.

"What time did you bring the posthole digger by?"

"It was around nine-thirty."

"I know.  I could hear your t.v. when I turned onto your street.  I wondered where the noise was coming from.  When I got to the door, I could see you.  I knocked twice, but you didn't respond."

"Bullshit.  I would have heard you."

And this became the story he could tell everyone.

"I could see him, his scotch in one hand, his balls in the other.  If you are trying to find his house, just follow the sound.  That's his t.v.  You can hear it as soon as you turn onto his street."

It was fun to see the old peeps, some of whom I hadn't seen since I left so long ago.  But it was maddening, too, feeling the need to hop from table to table to say hello, putting on the face to meet the faces I would meet, etc.  As usual when I am out, I wasn't drinking much.  This has long been my practice around the factory crowd.  God knows what truths might be revealed.

I bought a ticket for the train ride home.  Holy smokes!  I got half price for being old!  The round trip, given that I hadn't bought half the trip ticket, was $1.50.  I wondered if the train was often full of old people with nothing to do riding the train the way they used to go to the bank to get the free coffee.

On the ride home, I thought I heard the recorded voice tell me to "report any insecurity issues."  Well, now, I thought. . . there's an idea.  We are living in progressive times.

I haven't heard from C.C. for a few days.  They have probably put him in the Randal McMurphy ward by now.

O.K.  I've got to put this to bed.  I have gotten about 120 text messages while I've been trying to write this.  You know the drill.  Group texts.  Everybody loves something that someone posted which leads to some other "witty" post that people can love more than anyone else has loved a post.  But maybe, buried deep inside the chatter, there will be something from. . . you know. . . MOTL!