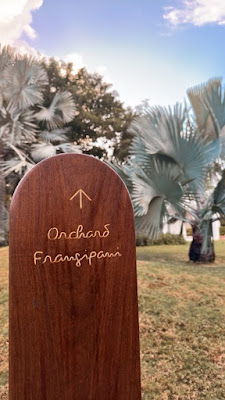 You won't believe this.  Frangipani.  That's the name of the villa in which Skylar is ensconced.  Hoodoo voodoo.  I'm not a big believer. . . but really.  My travel/art buddy says his life is chockfull of amazing coincidences.  Perhaps one simply needs to be attuned. 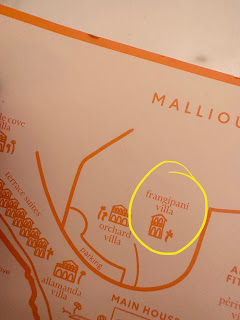 I've not taken a photograph in months now except those glamor shots of my dinners and drinks.  Sky sends me snaps of the work she is doing in the islands.  Models in Barbizon poses, cameramen hunched down into viewfinders sending tethered images back to a digital operator tweaking, color grading, a team of stylists. . . . Whew!  That's a lot of work to make an image.  Meanwhile Sky sends beautiful phone pics and videos that were made in a couple seconds.  It all makes me wonder.

I was teethed on another kind of photography.  I love a snapshot aesthetic, spontaneous and not overthought or overproduced.  But I had a studio, too, where I did all sorts of experiments with materials, transfers, etc.  But not enough.  Not nearly.

In some way, I guess, I got caught up between failures.  Not complete failures, but personal ones.  In the ensuing years since the studio, photography has blossomed and bloomed.  There are wonderful photographers and fantastic images everywhere.

In the main, I want to photograph my life again.  Simply wonderful snapshots of a life well-lived.

"You wanna make pictures, kid, first you get a life."

O.K.  I have one.  The cleaning crew comes today.  I won't be photographing them though I can visualize some stunning, formal large format photographs.  I have a pre-Thanksgiving Day Thanksgiving on Thursday with some of the folk from the factory.  One of the fellows, a truly wonderful cook, is deep frying a turkey at one of his favorite bars.  Outside, of course.  Wonderful pictures in my head. . . but I won't be packing a camera.  Friday night out with the gymroids?  These new outings have gained momentum. There is lots of laughter and weirdness, and the stories and speculations are wild, so of course, more people want to come.  But. . . I am no events photographer.

The holiday season is rushing by.  The weather hasn't been much like autumn.  Gunmetal gray days, damp and dreary.  But the forecast is for change.  I should check my horoscope.