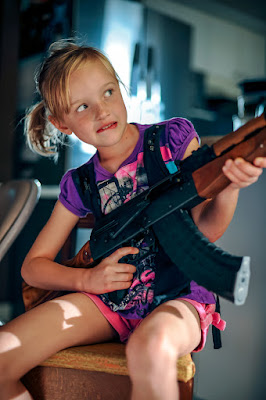 First love. She was five, I guess. We were in a daycare center my mother had decided I should go to, what would now be called pre-school. I had been watched by my grandmother until then in the country, a small village dominated by my great grandfather's small farm and the woods above it.  A few houses on the hilly, crooked roads, most families related in some way. My mother decided I needed to be around other children. I remember the day she took me for my "interview" to see if I would be going there. It was in the city where my mother worked. The room we entered was a wonderland to me, brightly colored toys, crepe paper creations, comic books. I looked at one of the comics as my mother chatted with a man. He asked me what I was reading, and I explained the visual story in words as it seemed to be unfolding. He asked me if I could read. I wasn't sure.

"He's a very bright boy," the man told my mother.  I could feel myself fill with pride.  My grandmother had taught me the alphabet, a few words, how to write my name.  "Yes," I thought, "I am smart."

Mornings now, instead of going to my grandmother's house, I rode into the city with my mother.  The rides home are what I remember most.  My mother would play the radio and sometimes sing along.  It was something new, something I didn't know.  It tickled me, as they used to say.  It made me laugh with happiness and wonder.  We would get home just in time for me to watch "The Mickey Mouse Club."  I had formed a crush on Annette.

I'd never been around kids before other than my two cousins, one, a girl, a year older, and one, a boy a year younger.  Being the first boy in the family came with perks.  I got a lot of attention.  But there were twenty or so kids at daycare.  There were already cliques.  The toys fascinated me, though, and I often sat alone playing as I did at home.

There was fenced yard in back of the daycare and stick horses that the boys would "ride" around like banshees.  I followed.  At the back of the yard near the fence was a playhouse where the girls would sit.  I followed the boys on my stick horse to the playhouse where they would torment the girls.  One of the girls, pretty and fair haired, gave me a kiss.  The moment was transformative.  I had been chosen.  I had been made.

When I sat alone with toys after that, she would come over and sit with me.  We'd stack blocks together, create things.  She smiled often and we would giggle.  Like me, she was quieter than the others.  We didn't have words, but we knew when we looked one another in the eyes, little chemical flashes and blasts in the body and in the brain.  Sometimes she would get up to go to play with others.  I'd watch her laugh with other boys.  This confused me.

When nap time came, we went to cots lined up end to end and side by side, sheets draped between them.  She would get the cot next to mine and pull up the bottom of the sheet.  We would hold hands and giggle.  We got caught, of course, and were separated.

One day, I got a terrible pain in my gut.  They called my mother who came from work to take me to a doctor.  I was placed into a hospital ward overnight.  They put me in a gown and in a bed with high guardrails.  My mother left.  I had never slept away from my parents before.  The large, open room with other beds, other children.  A strange semi-darkness, the quiet footsteps of nurses.  Sometime deep in the night, a scream pierced the quiet, loud. . . unending.  Terror.  I'd never heard a siren.  I cried out.  I wanted my mother.  A nurse came to quiet me.

My parents arrived to get me sometime the next day.

I never went back to the daycare.  The river behind our house, the Little Miami, flooded.  Soon, my parents sold the house and we moved to Florida.  Palm trees and hanging moss, everything green and sunny.  We had never seen such sun.

Perhaps the clouds of my youth had shaped my temperament.  But I liked the sun.  I was put into another day care.  There were new girls.  They were more forward, less flirty.  They liked to show the boys their underwear on the swing sets.  They would swing high, pump their legs, and laugh.  One day, two of them took me behind a toolshed, pulled down their pants, and kissed me.  Then, laughing, they ran away.

This was a rough and more terrifying country.  This was my new life now.  This is how I would grow up.

At night, though, alone in my bed, I dreamed of my first girl, that first kiss.  We lived in a playhouse.  I would ride my stick horse out and then back to her again.  She always smiled as if she had been waiting.