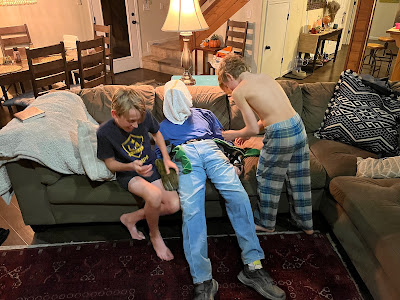 "Boys will be boys," I heard a mother tell her friends after her son did something apparently egregious.  I guess she did not grow up listening to "Lola."  Either way, though, there is a bit of truth in what she said.  I had some rich hippie friends who lived nearby.  The wife was all organic and sugar free, and the boys were brought up to be non-violent.  But she couldn't stop them.  As soon as they went outside, they picked up sticks and pretended they were guns.  She took to referring to one of their sons as "J.T."

"We're sure he will do jail time."

This is a picture my mountain buddy out in Yosemite sent me.  I'm not sure if that is the real Dancing Larry drunk and passed out on the couch of if the boys are making a Drunken Larry for Halloween.  My guess is that it is the real Larry, but truly, I don't know.  My mountain buddy has an excess of testosterone, though, which made him a great college athlete and a fearsome climber, and having spent some time with the kids this year, I see some of those extra "boy" traits in them.  They are sweet, but don't turn your back for too long.  You could end up like Larry.

Larry likes it, though.  He is old and child-free, so now he enjoys being part of the family.

I'm sure Larry and I will be sharing a room at some point.

I get lots of email ads for magazines for some reason.  I don't block them because once in awhile one of the stories they send me a link to interests me, and I can read it without subscribing.  Yesterday I got one for "November Horoscopes."  What the hell, I thought?  They got me with their click bait.

What I learned is that I should not speak in November.  The entire month.  Nothing I say will be taken well and is likely to spark irritation and resentment.  I told my mother this last night while we were passing out Halloween candy.  She snorted a snort that clearly said, "No shit."  I guess that is my problem in the best of times.  I know horoscopes are horseshit, but once read, you can't get the suggested advice out of your head.  November, it seems, needs to be a silent season.

"Boys will be boys."

I need to become more of a boy again.  I used to be a "Do Boy."  When my mountain friend lived here, it was constant go, go, go.  Hit the gym, take a run, play some ball, etc.  Now, I think, I'm a "Do Nothing Boy."  With the potential of hosting a guest, I see how rundown I have let things get.  The things I need to do keep piling up.  When I think of them, I become enervated.  Even my bedding has become shabby.  I need new sheets and pillow cases.  I need to get a new mattress and pillows.  There are so many things that need to be done, I may just hire someone.

That's what the New Man does, right?

Most nights, I think, I look like Larry minus the evil boys.  That's me after two episodes of "Shameless."

My mother and I had the usual good time passing out candy last night.  As I've mentioned, my mother's street is one that kids come to from near and far.  There were hundreds of them, all cute, all polite, all with parents who were delightful.  I am, of course, good at initiating the conversation.

Some were shy and some were bold, but they were all polite and were nice about taking the candy out of the big bowl.

"How many pieces can I have?"

This was always an older kid.  And, having been trained to field questions for so many years, I would say, "How many do you think would be appropriate?"

As intended, this set them back on their heels a bit.

I refrained from saying, "and call me in the morning."

We had a lot of candy, but there were so many trick or treaters, we ran out just after eight.

"Well, mom, it's time to close up shop.  It's o.k.  All that will be coming now are the kids too old for Trick or Treating."

Back in my own neighborhood, things were quiet.  I had candy just in case, but no one came to the door.  I thought about watching an old spooky movie, something black and white, but being alone, such a thing seemed a little too gloomy.  I poured a drink and was in bed just before ten.

It is November now, my silent month.  Today I have the cleaning crew and an a.c. repairman for the apartment.  I'm going to try to sit and think less and move more.  Less talk, more action.  If not a Do Boy, perhaps a Do Something Boy.  Yea. . . that would work.  Small steps, one day at a time--just like A.A.