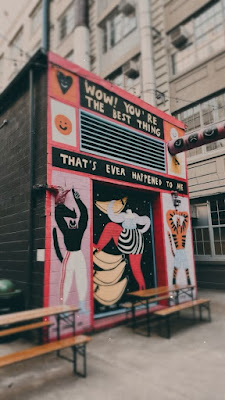 O.K.  I'm back.  It's all good.  Perhaps the focus and clarity I was searching for came to me yesterday after a trip to the gym to purge.  Luck may have played a part in it, too.  My car barely started on Sunday when I went to my mother's, the battery scarcely turning the starter.  And again when I got in to come home.  Yesterday, it was just dead.  I called AAA and waited in the comfort of my own home cooking up old photographs for my friend.  Mohamed from Jordan showed up, a tremendously friendly fellow.  He wandered around my yard a bit somehow taken with the bird feeders.  He told me of his life, his wife and children, his diet, the first World Cup Soccer game. . . .  $200 later, I had a new battery.  Sure as shittin' it was expensive, but again. . . in the comfort of my own home.  I think that started the Happy Ball rolling.

I got to the gym later than usual.  None of my pals were there.  No talking which was a good thing given my last couple of days.  I worked.  I sweated.  I left.  At home, I made a clean, low calorie protein smoothy.  I was beginning to feel fresh.  A shower, then a nap.

The day had gotten away from me, though.  I got up just in time.  With a fresh battery, I drove to mother's.  Chat, chat, chat.

The usual whining.  I know she doesn't think it anything for me to break my day up for the daily conversation.  "What else is he going to do?  He has all the time in the world."  That is what I think she tells herself, that and that I need company.  Maybe.  I don't really know.  But she is going to be 91 in a minute and I'm sure she doesn't really want to be alone.  With great guilt and a lot of something else, I left.

A trip to the grocers.  A head of cabbage, a pack of carrots, one squash, one white onion, a green and a red bell pepper, two small red potatoes, broccoli, cherry tomatoes, and some tofu.  It was almost dark when I got home.  "Goddamnit," I said, beginning to get mad and frustrated.  Then, "No, no. . . chill.  What the heck, man?  Slow down.  Just peace out."

And I did.  I opened a nice bottle of pinot and put on some music.  THE music.  I felt the coming of nirvana, just a little one, something just sweet and fine.  I washed vegetables.  Chop, chop, chop.  They went into a big bowl.  Holy shit, though, too many, too much.  I lay out some foil and spread the vegetables out on it.  Kosher salt, rough ground black pepper (POB pepper, babe), cayenne pepper, and olive oil.  I cut the tofu and put it on top.  I slid the lot of it onto a tray and took it to the grill. The newly renovated grill.  The inside parts had rusted through as they always do.  I had tried to find parts at Home Depot, but they didn't have them.  I figured that was how this company, Nexgrill, made its money.  I see these grills on curbsides all the time.  Every couple years, you buy a new one.  One day, though, I did a Google search for grill parts.  I bought the whole lot on Amazon.  They were here the next day.  It cost a pittance, really.  Replacing everything inside the grill--you know, a MANLY grill--I felt myself an accomplished BBC fellow once again.  Big Balls in Cowtown.

While I was chopping, the phone had rung.  I glanced at it to see.  I thought it was Q.  I'd call him back when the chopping was done.  Now, vegetables grilling, two cats on the deck with me and my good glass of wine, I pulled up my phone to call.  But I had misread it.  The call wasn't from Q, it was from Mr. Tree. He had left no message.  I didn't feel like talking just then, so I sat back and listened to the grill and THE music.  I was thinking of my friend in NYC.  I'd sent her pictures.  We'd shared a memory and a laugh and now some music.

And then a pickup truck pulled into the driveway.  Mr. Tree.  Jesus Christ.  There I sat, phone on the table.  Whatever.  He came with the usual hugs, saying, "I just called you but couldn't reach you."  He looked at the phone.

He'd come for money.  He is repairing one of his big trucks, he said.  He needed to get me to pay him.

"I don't even know how much I owe you," I said.  I had not asked him to come trim the trees.  One day he just showed up.  He gave me a price.  It stung, but it wasn't outrageous.  I wrote him a check.  I liked him a bit less than before, though.  I asked him if he would like some wine.  Of course he would.  He checked his phone.  It was his fiancé in Cuba.  He put her on speaker and introduced me.  She is a doctor of medicine and sounded very sweet.  We chatted briefly, then he said he would call her back in a bit.

He then launched into a story of his mother's death during Covid.  He could not get to Malaysia in time for  the funeral, but now he needed to go to pay his respects.  He didn't feel good that he hadn't been to the grave.  He was trying to arrange for his fiancé to go, but travel for Cubans is dicey on both ends.  Getting permission to travel is one thing, but many countries won't let Cubans transit through on connecting flights without visas, or, in some cases, not at all.  He recounted his woes of planning a route to get her there and back.  And then,

"So, anyway. . . I want you to come.  I'm from a beautiful island renowned for its cuisine.  You can come and we'll get you hooked up with some women.  I have a room for you in my house.  Then we can go to Thailand.  You won't believe Thailand. . . . "

I make an offer of dinner, and he accepts.  I put the jasmine rice in a deep bowl and spoon vegetables and tofu over it.  Teriyaki sauce.  The pinot goes perfectly.

"Man, this is really good," he exclaims.  I would think him simply polite, but there was no doubt--it was REALLY good."

He talked about the cuisine on his island, Pangkor.

"I'll be like Anthony Bourdain," I laughed.  I told him I would research the flights.

Dinner finished, the wine bottle empty, he said he had to go.

"Good.  Take you money and leave."

Of course I didn't say that, but I was glad to have the evening to myself.  The clean up was easy and only took a minute.  And then a whiskey with the cats.  And the music.

"The depth of you arcane knowledge is astounding," I wrote.  She replied that she enjoyed unnerving me.  Oh, she does.  It is her superpower.  She can throw me off any time she takes a notion.

The best I can do is write things like "Word up."  I have no idea what that means, what I am saying.  I'd just heard the song playing in Whole Foods the other day.  Some things age well.

I was feeling great.  New battery.  The purging.  A great meal.  The music.  I was happy.  I was sleepy.  I would need nothing to sleep.  I would have good and pleasant dreams.