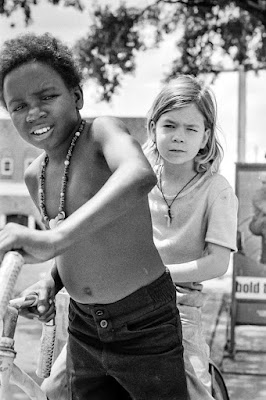 When football season rolled around, Allen and I were still too small to play with the ninth graders, so we would spend another year playing in the neighborhood.  We had good players and would play five or six man football against teams from other streets.  Without a doubt, our street was dominant.  One day while we were playing, Allen's older brother began picking on him, and I, as was often my wont, said that he should leave him alone.  Allen's brother didn't like me all that much anyway, and so with angry eyes, he turned and shoved me.

I didn't, but everyone was looking at me like I had started it, so there was nothing to do.  We squared off.  Allen's brother was taller than I by quite a few inches.  I knew how to box, but I wasn't getting the chance. He kept kicking me with his long legs.

"No kicking," I said invoking the Marquis of Queensbury rules, or whatever.  He kicked me again, but this time I grabbed his leg and threw him to the ground.  As soon as he hit, I was on top of him, my knee on his head.  When he tried to jump up, I bounced his head against the ground like a basketball.  Again and again.  I could feel the bones of his skull giving a bit.  It was a horrible feeling that made me ill.

He didn't, so I felt no choice but to bounce his head up and down with a little more force.  He started yelling "Give, give!"

I was afraid that when I let him up, he would start again.  I didn't want to fight him.  But he was hurt and turned to go home.

One day when I was walking past his house, his father was sitting in a lawn chair in the yard.  Allen's brother was with him.  Allen's father called me up and told his son to fight.  He would referee.  It would be a clean fight.  My father had been a fleet champion boxer in the Navy and had trained fighters at my Uncle's gym when he was a professional fight promoter.  My father taught me to keep my guard high and close, to stay inside the opponents punches, and to punch absolutely straight.  He said that a  jab should be fast and hard enough to knock a man off his feet.  Since I was a little boy, my father would hold his hands up for me to hit.  So when Allen's brother came at me, that is what I did.  He was a looping roundhouse puncher always swinging for the fences, so he made it easy.  I fought him as a southpaw so that I was throwing jabs with my strong right hand.  I'd catch his looping punch from his right hand with my left then throw that straight, hard jab with my right directly at his nose.  If you've never been hit with a hard punch in the nose, you won't know how much it hurts.  You can taste the blood like metal in the back of your throat and your eyes stream tears to blind you.

Quick enough, Allen's father said, "O.K.  That's enough," and the fight was over.  I hadn't even been hit.  I felt good about it but pretty sick, too.  Whether you are the one hitting or the one being hit with a bare fist, you always feel the crunch of bone.  It was something not to like.  It was truly awful.

A few weeks later, we were playing football in the neighbor's yard and Allen's brother got mad at me when I tackled him.  Again, he wanted to fight.  I am sure his father had told him he was going to whip his ass until he beat me.  So, I squared up, only this time when Allen's brother threw the looping right, he caught me behind my right ear.  Oh, shit, I thought, that really hurt.  Right away, though, the other kids started yelling.  Blood was pouring down my neck.  My ear had been ripped half way off.  Like the little sissy I was, I turned and ran home to get help.  My mother put a towel behind my ear and my father loaded us into the car.  We went straight to the emergency room.

It took a lot of stitches to reattach my ear.  I still have a rough scar from top to bottom to this day.

"He didn't do that with a punch," my father said.  "He hit you with a rock."  And that was probably true.  Again, I'd been scarred by a miscreant older boy in the neighborhood who didn't play by "the rules."  I was learning that there were no rules where I lived.  To count on some code of honor or of ethics would only get you killed.