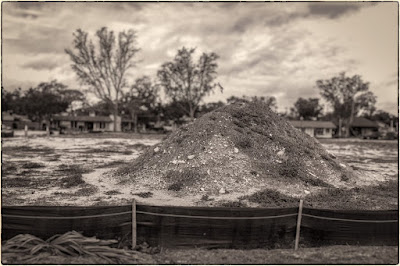 I wanted to continue the narration of my journey into adolescence, and tried, writing and rewriting the same paragraph for far too long, but it is a no go today.  I don't have the concentration needed this morning.  It is o.k.  I am content.  I slept an uninterrupted eight hours last night and got up to a cooler, crisper dawn that is turning into a sparkling morning.  I'm drinking my coffee which was made with both ground coffee beans and dried mushrooms which has not affected the flavor but which is guaranteed to make me young and promote longevity.  It has to be true.  I read it on both the Mayo Clinic and the WebMD websites.  Immortality has a certain attractiveness.

The cleaning crew comes today, and I have much to do before they arrive.  I need to go to the gym and come back and shower before they get here, then I am taking my mother shopping and to lunch.  This is part of my sophisticated holiday celebration.  Perhaps tonight at dusk, I will take a camera out and capture the "magic of the season."  Wednesday night I have a cocktail date, and Friday I am scheduled to take a train ride to Grit City where I will dine with friends at a new ramen restaurant and shop for gifts and stollen.  Apparently there is a bakery there that makes it best.  There will be the lighting of the "Holiday Tree" one night this week followed on Saturday by the "Holiday Parade."  I'm curious to see if there is a "Holiday Santa" this year.

While I was visiting my mother yesterday, Let's-Call-Her-Lucy came over from across the street.  She had a story to tell me, she said.  She sat down next to me nearly on my lap so she could keep touching me on the upper thigh and lean in close as she talked.

"I got this cough the day after Thanksgiving," she said hoarsely.

Jesus Christ, lady. . . what the fuck?  She coughed demonstratively.  She sounded awful.  But as I say, Lucy is loopy as a parakeet and didn't want to notice my attempts to shield my face.

"I've had two hear attacks from coughing," she said.  "I've been trying to get the doctor to send in a prescription for cough syrup all day.  Finally my husband called and said that he was driving up there now for the prescription, and if I had another heart attack because they hadn't sent the prescription in he was going to sue them.  He is up there now."

Of course, it is a prescription cough syrup with codeine that she uses regularly.

"Does it make you sleepy?" my mother naively asked.

"Why do you think she's so loopy?" I wanted to say, but of course, being a real charmer. . . .   Codeine is only one of the drugs that Loopy Lucy uses to keep the world at bay.

I didn't tell her that it was a lousy story.  I stood up to give her my chair and got another one for myself which I set some yards from her.

"Thanksgiving was fun, wasn't it?" she said.

Of course, of course, my mother and I replied, it was lovely.

"You and Frank sure got along.  He really liked you."

So. . . it seemed I was in the clear.  Fuck-You-Frank had not taken it badly and apparently didn't hold a grudge.  This was good news--for my mother.  She's been invited to go with the neighborhood group on a caroling outing in a couple of weeks.  There are guitars and flutes and everyone wears a red hat.  Of course, I am invited, too.  It will be a great event.  I think the local news team will be out with the trucks to cover it.

As always, though, I'll miss it.

My Tennessee BF texted from some country bar last night.  He didn't look so sophisticated there in double denim sitting with a can of Bud and a whiskey chaser, big haired tranny looking women on a stage preparing for a "The Voice" party.  It looked like The Nightmare Before Christmas to me.  But I'd forgot about double denim.  I'll have to check with my fashion friend to see what she thinks.  Then, one day, I'll wear it anyway.  But I'll need cowboy boots to look authentic.  Just like Dwight.

The photo at the top of the page is the culmination of weekend photo outing.  Don't judge.  It's the world, not me.  But, you know. . . I had to share.

I read this last night, liked the passage, and sent it on to someone I hope is writing her memoir.  But really. . . you know. . . it reminded me of another writer, one near and dear to my own shriveled heart.

Kitchen Confidential wasn’t one of those books that wrote itself. Tony’s whoosh technique wouldn’t work unless he had a grip on what he wanted to whoosh about. Simply stringing together the events of his life in chronological order didn’t seem like a promising plan because, for one thing, he was not yet famous enough for readers to care about anything not directly related to his (rather mediocre) career as a chef—and for another the “and then, and then” approach to storytelling can quickly become stultifying. Meanwhile, and maddeningly enough, it is an axiom of the publishing business that memoirists (and biographers) stray from the chronological approach at their peril, so natural does that method almost always feel when one is attempting to construct the kind of tale that keeps the pages turning.