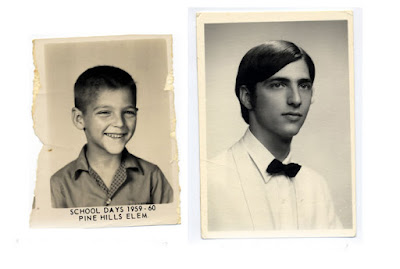 That summer after elementary school, shortly before I was to attend the new Junior High School, I got sucker punched in the nose by a neighbor kid, a guy going into the ninth grade.  He came from an Italian family, and each morning before school as we passed his house, we could hear his mother screaming and crying in the loudest voice imaginable.  We had no idea what went on in there, but Frankie would come out as if nothing strange were happening.  He would have his brown bag lunch with him which he would throw down to the ground when he got to the fence in a neighbor's yard where we all used to cut through on our way to school.  He was a strange kid, and I don't think anyone liked him.  His father was a postman and he played softball on a team with professional looking uniforms.  We'd see him coming to the car after work dressed in it.  We knew he wasn't a professional baseball player, so to us kids, he looked like a grown up version of ourselves.  Somehow, it didn't seem manly.  We all thought entire family was simply strange.

Our telephone was on a party line with Frankie's family, so sometimes when I'd pick up the phone, I'd hear Frankie's mother talking to someone in that wailing voice.  I'd usually listen for a minute before I hung up.  I made some crack about it one day as we were all standing around the carport of Allen's house.  I never saw it coming.  I just felt the dull thud and the pop and I realized I was lying on the ground, nose bleeding.  Allen's mother came out and put a cold rag on my nose and had me lie with my head back until my the bleeding stopped.  My nose was throbbing and felt incredibly swollen.  After lying still for a long while, I got up off the ground and staggered back down the street to my house.  When I looked in the mirror, everything had changed.  I knew there was nothing to do.  For some reason, I filled the tub with water and climbed in.

It was a weekday, so my parents wouldn't be home for hours.  I lay in the tub a long while broken hearted. It had not been fair.  There had been no challenge, no name calling.  He had just hit me as hard as he could from my blind side.  He was a big kid hitting a little kid.  How many rules had he broken?  My nose was permanently altered and there was nothing for me to do about it.

When my parents came home, my father asked me what happened.  Then he left the house.  He went to Frankie's right away.  When he came home, he didn't look happy.  There wasn't much he could do, really.

"I told him that one day, you were going to kick his ass," my father said.  I felt every bit the loser, somehow a big disappointment.

I never looked as innocent after that.  I'd had a sweet little hillbilly face.  Now I had the face of someone who'd lost a fight.  Frankie wouldn't be the last person to try to break that nose.  It stood on my face like a permanent advertisement.

Seventh grade was a shock.  After being coddled by a single teacher in a single classroom every year, I was now attending something akin to a prison with wire fences meant to keep us in.  The school was cement.  There was nothing soft or inviting.  Every hour, a bell would ring and we would have five minutes to make our ways through loud, congested hallways to another concrete classroom.  I had a locker in which to store my books between classes.  The sound of metal doors slamming shut.  Aggressive kids travelled in packs and a boy alone could become an easy target.  If you didn't handle it right, you would be bumped and battered class after class, day after day.  It was Paradise Lost, Eden after the fall.  I'd looked forward to going to school for six years.  That was over.  There was nothing fun about this at all.

I was on the border of the bus pickup, one street shy, which meant I hade a two mile walk to and from school every day.  I usually walked with Allen from down the street.  We'd been in class together since the first grade.  Now, though we went to the same school, we had no classes in common.  We were making different friends.  Even my own street was being Balkanized.  There seemed no end to the strange cruelness of this new institution.

I had, however, come with something of a reputation. It was known, even by those who had never seen us, that I was in a band.  I was a drummer, and what made that special is that I had a full drum set, brand new Ludwigs with Zildjian cymbals, just like Ringo Starr.  That trap set made the band look professional.  I also had a Beatle haircut.  This made me likable to the girls but not so much to the cracker boys with slick hair cut short on the sides.  I was o.k. for the most part in my own classes.  I was actually making friends.  It was the older boys who were the problem.  They didn't know me, but they sure didn't like me.  Many of them, anyway.  I'd make friends later, but early in that first year, things were intimidating.

It all began to change one day when I traded punches with an older, bigger fellow.  I don't remember what it was over.  Probably nothing.  We were between classes when he came up and stood in front of me.  It was a strange thing.  He punched me as hard as he could in the arm.  There was a crowd around us.  There was nothing to do.  I hit him back.  This became a contest with unspoken rules.  Punch for punch in the arm.  I, however, left my shoulder slack so that every time he punched me, my shoulder gave with the punch.  His punches had no effect.  He, on the other hand, hardened to take each punch, so mine landed with audible resound.

I was happy when the bell rang so that we all had to scurry to our classrooms.  But Spears--that was his name--spat some invective at me telling me we weren't done.

When I got to class, my reputation had been made.  The tale had already gotten around.

"I heard you beat up Spears," a boy said with an astonished look.  I hadn't, but I didn't say anything.  For the rest of the day, I was honored with the big fib.  Funny enough, when I saw Spears after school, there was no animosity, and he and I eventually became friends.  He didn't live far from the school, and many days, I'd walk with him on my way home.

The school, though, was full of cracker miscreants with violent, drunken fathers and drop-out older brothers.  Things would not get better.  I'd have to learn many lessons fast.

Not everything was horrible, though.  One day an older kid asked me if I'd like to join his band.  They didn't have a drummer but they had the rest.  They were having a band practice not far from my house.  The two kids who played guitar in my last band were now going to the other school across town, so I said sure, I'd like to come.  I'd have to get my parents to drop me off, but I'd let him know.

My world was getting to be much larger very quickly.  Not better, I thought, but bigger, stranger, and definitely weirder.  Things were certainly changing.