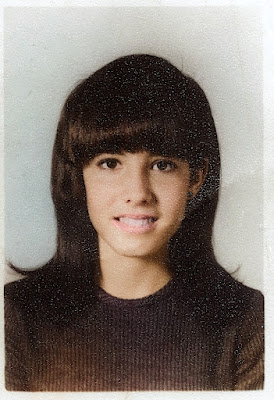 She arose sui generis, fully formed, perhaps from sea foam or simply engendered from the loins of Zeus.  She was in the same grade as I, had been for over a year, but I'd never heard of her.  Maybe nobody had.  But there she was in last year's Yearbook looking nothing like her current self.  Surely her sudden emergence had to be a complete surprise even to her.

One day, a girl stopped me in the hallway at lunch.  She said a girl wanted to meet me.  And there she was, unbelievably beautiful, smiling at me.  After school, I walked her home.

And that was it.  Boom!  I never wanted to leave her side.  This was everything in life, I knew.  I was in love.

We talked.  And talked.  I'd never talked this way.  It was that first formation of verbal consciousness.  I knew what she liked.  I knew what she didn't.  I knew everything about her life.  We entered one another's psyches.  We were fourteen.  We were old enough.  Soon, we said.  We would be together forever.

And she was fun.  She lived in a nicer neighborhood than I did.  Her parents were conservative, her mother and grandmother from Cuba.  Her mother was tall, taller than her father, with long arms and legs and just a hint of a mustache.  She was extremely formal.

Emily was the opposite of all that, small and perfectly shaped.  Each day, she would leave the house in conservative attire, then stop off at her friend's house and change into an outfit of which her mother would not approve.  After school, she would stop and change back.  As we walked, she would take my hand and stare deeply into my eyes.  She asked me if I loved her.  She asked me if I would marry her.  Yes, of course, I said, and I meant it.  It was all I wanted to do.  At night we would talk for hours on the phone, but her parents didn't approve of me.  They wanted to meet my parents, and one Friday night, they came to our house.

I was mortified.  It was as if I was seeing our home for the first time.  My parents had some friends over, people who could pass for authentic Gypsies, loud in voice and gesture.  Our house shrunk when her parents entered.  There we stood, the eight of us, in the living room/dining room/kitchen.  My mother and aunt had made a patchwork rug for the floor that looked like a Harlequin's coat.  Everything we had looked cheap and tacky.  I stood rigid with a horror and embarrassment from which I would never recover.  They didn't stay long, and when they were gone, I went to my room.  I knew that had not gone well.  For the first time in my life, I had seen myself from outside, and the terror of that vision would stay with me forever.

After that night, things got hard.  When report cards came out, Emily's grades had dropped.  She was put on restrictions.  She wasn't allowed to use the phone.  I wasn't supposed to walk her home.  I was a hood, they said, a bad influence.  If her grades improved. . . .

And maybe if I got a haircut.

I saw her every day at school.  We were a popular couple according to the Slam Books that circulated hand to hand.  She was brave, but she was sad.  No matter what, though, she was for me.  Unconditionally.  She didn't care what anyone said.  She was fierce.

I'd walk her home after school as far as I could.  She'd kiss me hard before we parted.  She was all I could think of.

One Friday night she called me.  Her parents had gone bowling.  They had taken her little brother with them.  I should come over, she said.  Her house was far from mine, but I ran as much as I could.  And then, there we were, alone.  Her house was nothing like mine.  It was big with large rooms.  The kitchen had a counter with barstools that looked out over a family room with glass French doors that opened up to a small lake.  I was in a foreign country.  I had walked, I thought, into a movie set.

We sat and talked like adults, as if this were our house.  We held hands.  We kissed.  She told me that when she took a bath and the warm water creeped up her sides, she pretended it was me.  I felt the floor dropping out from under my feet.  I was disoriented, dizzy.  She showed me her room.  It was a girl's room with pillows and flowered prints under her canopied bed, a collage of pictures and notes and ticket stubs arranged upon her wall.  The room was dim.  We sat on her bed.  Without regret, I felt betrothed.

I stayed with her like that until her parents came home.  When the car pulled into the driveway, she let me out the back door.  I ran down the hill toward the lake and lay in the grass behind a small bush gazing into her house.  I could see her parents and her little brother, and I snuck back up the hill on my belly like a soldier in war, trying to hear what they were saying.  There was no yelling, I could tell, nothing out of the ordinary, and after awhile, I slithered back down the hill until I was sure they couldn't see me, then made my way across the neighbor's yard and back to the street.

Walking home through the dark, I crossed a large, empty field.  It was a clear, cool night with a billion stars.  I stopped midway.  My stomach was cramping badly.  I was double over unable to stand.  I fairly cried when I got to my feet, bent but able to walk.  My parents were still out when I got home.  I lay in my bed curled 'round my pain for hours.

It wasn't until some time later that I realized what had happened to me.  Epididymal hypertension is the medical term for it, but I would come to hear it called "blue balls."

All I knew that night was that I was truly and forever in love.