That's Little Eddie Brigati and Me 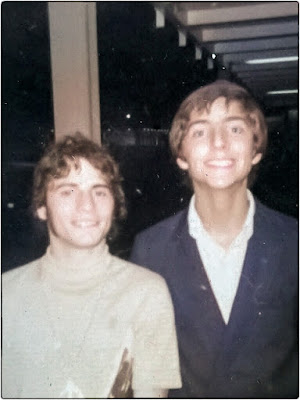 I have to jump ahead in the Bildungsroman.  I just read this morning that the drummer for The Young Rascals, Dino Danelli, died.  Now we weren't close friends.  He hadn't written in years.  But we did have that one night when I was still a young boy.  The tale.

Wayne, Steve, and I had gotten very good at sneaking backstage at concerts, and once backstage, nobody ever seemed to bother us.  The trick was to get there early before the crowd.  At that point, people were not really paying much attention.  It didn't always work, though. When Diana Ross and the Supremes came to town, they played at a big arena that also hosted rodeos.  We got backstage but had to hide in the corals with the horses as some cowboy chased us about.  We never got close enough to meet Diana Ross.  We never even got into the concert.  We ended up running though some swampy wooded area and hitchhiking the many miles home on an almost deserted highway.  Per usual, though, we got a ride back to town.

Most of the time, however, we were successful.  We were backstage with Mitch Ryder and the Detroit Wheels when they played at a large skating rink here the Youth Center.  We chatted with the Dutch Masters in their dressing room as they put on their wigs and got ready to go onstage.  We partied with Graham Nash and The Hollies.  But it was the after party at a hotel with The Young Rascals that I first encountered drugs.

We watched the Rascals concert from the backstage wings that night, and when they came offstage, there was a kind of reception where they said hello to what we guessed were people somehow connected with the concert business.  And there were radio disc jockeys that we knew, one who often gave us a ride back to town from various music events where he would do live broadcasts.  So, simply because we were there, we were somehow invited back to the shitty hotel where they were staying that night.  We didn't have a car, of course, but the hotel was not too very far away, so we hoofed it.  By the time we got there, the party had already begun.

We went into Felix Cavaliere's room with a bunch of older girls who were milling about.  Felix sat cross legged like some Buddhist guru on the bed as he rolled joints and passed them around to the people sitting on the floor around him.  The other Rascals popped in and out of the room taking hits and going back into the outside hallway that led to the other rooms.  Felix was the heart of the band playing the Hammond B3 organ and making the bass notes with his foot on the big pedals underneath.  That was the thing that blew us away.  All that sound, and they didn't even have a bass player.  Felix's foot would fly over the pedals like a zephyr hitting the bass notes with unbelievable perfection, all the while fingering those tremolo rhythm chords and lead notes on the keyboard while singing.  He was like a flame you stared at but couldn't fix.  Even sitting on the bed, rolling joints with those delicate fingers, he seemed wizardly.

Dino, the drummer, was a showman, too, twirling his drumsticks like batons, throwing them into the air and catching them on the downbeat.  I watched him closely, though, and he didn't always catch them.  The trick was that he had a bunch of drumsticks set where he could grab one if he missed right at the top of the bass drum so that from a distance, you would never really notice.

At some point, it became obvious that Felix wasn't really interested in having a boy band in his room, so we stepped into the hallway with Dino and one of the girls.  We all chatted for about ten seconds before Dino took the girl into his room.  We were standing with Gene Cornish, the guitar player, in the hallway when Little Eddie came out with an acoustic guitar.

Little Eddie was the band's front man, a vocalist who played tambourine and sang leads and backup to Felix as he danced around the stage like some magical leprechaun or pixie.  When Gene went back into his room where we could see a girl waiting, Eddie hung out a bit.  And it was strange.  He played guitar and sang there under the buggy outside hall lights as we awkwardly stood around him.  Wayne had brought a demo record and handed it to Eddie asking him if he would listen to it sometime.  He was getting Eddie to sign an autograph in a notebook he had, and when Eddie handed him the guitar, Wayne began to play.  Wayne was the best musician of the three of us and would go on to be a studio musician and back many big acts.  After Eddie had signed his notebook, Wayne pulled out a little instamatic camera and asked if we could take some pictures.  Eddie was a sweet guy and stood for pictures with all of us.  When they came back, we each took our own.  There are other pictures of the night, but they went with Wayne.  Forty or more years later, I ran into Wayne's brother who asked me if I remembered that night.  He had, he said, just been looking at the photographs, so they are, indeed, still extant.

It wasn't long, though, before a couple of the girls came out of Felix's room and started chatting Eddie up. He asked them into his room, and that was it for the boy band.  Our party night with the Young Rascals had ended.  Jacked to the gills, as they used to say, we made our way out to the highway.  Not ready for the night to end, we decided to walk the long miles back to our neighborhood and to our homes.