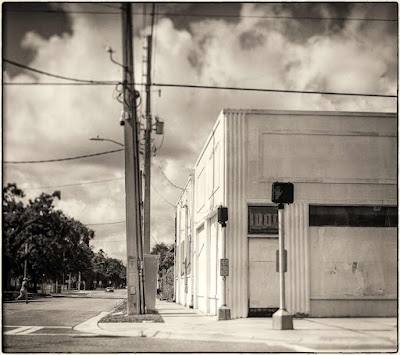 The James Brown concert was the weekend before football camp opened up at school.  I had decided to return to athletics after being a Beatle for a year. I was pretty sore the day I showed up.  I had strained something in my groin in my super heroic sprint away from the robbers, and I was having difficulty turning my head after getting popped in the neck just below my ear.  Football practice was "two a days" meaning we practiced once early in the morning and again in the early afternoon.  We would do this until the school opened classes.  This year, I would be in the top class at the junior high school.  It felt like something.  To me, it meant walking through hallways wouldn't be nearly as challenging.

Our coach was a moron.  He'd reportedly been drafted out of college by the Dallas Cowboys.  Nobody knew how long he lasted or if he even made the team.  But he was arrogant and dumb.  And he seemed to be cruel.  He had us run.  And run.  And run until some of the kids puked.  And then he'd have us run again, up a sand hill.  But the real cruelty came when we began contact drills.  One of his favorite drills was to put a kid in a circle of boys and have him try to break through.  He liked, too, putting two boys head to head to see who could smash the other back.  He wasn't so much into teaching us how to play the game, though.  The year before, I played on a Boys Club team coached by one of the kids dad's who was a scout for the Baltimore Colts.  During his practices, we learned plays, were instructed in how to deceive an offense or defense.  We were undefeated across the county, even in the championship game where he other team used the boys a year older than allowed borrowed from the jr. varsity team at the high school.

But we learned nothing but macho cruelty from Coach Moron.  And he was horrible at assigning kids to positions.  This was the year when social rankings really took effect.  There were school cliques that vied for attention both from the school and from their peers.  Coach liked to use some of these boys in key positions.  I knew I should have been the quarterback that year, but he chose a fellow as dumb as he.  I knew the game.  I could read defenses.  I had a good arm.  But Coach Moron had no affection for me.  He once said, "When you run, you look like a palm tree in a storm."  It was a reference, of course, to my hair. Oh, Coach didn't like long hair.  That was sissy shit.  I became friends with some of the rougher kids on the team who were from even poorer neighborhoods than mine and were also being overlooked.

That was the year when schools decided on a hair code.  One day, Coach announced that everyone was going to have to get a crewcut if they wanted to play on the team.  I was mortified.

"When you play as well as Namath, you can wear your hair any way you want."

One of the kids on the team said to come over to his house.  He had some electric clippers.  I went with him after school.  So did a bunch of other guys.  They all wanted to see me get scalped.

I showed up at practice the next day with a burr cut and a white neck.  It didn't matter, though.  Coach had no love for me.  Still. . . I wasn't the fastest kid on the team, but I was fast.  I wasn't the biggest kid on the team, but I was big.  And without much competition, I was the smartest, I was certain.  Before the first game, I made it into the backfield at fullback.  He also had me playing linebacker on defense.  And in our first game, that is where I played.  I was good at reading plays and I made a lot of tackles, but our team was pathetic and we lost.  At halftime coach screamed at us that we were a bunch of goddamned pussies.  I'd never heard an authority figure talk like that before.  To him, we were sissies and a disgrace.  But I knew the truth.  He was a moron that had built a terrible football team.

There was one good thing coming out of joining the football team, though.  Emily's parents didn't like her having a boyfriend with long hair. 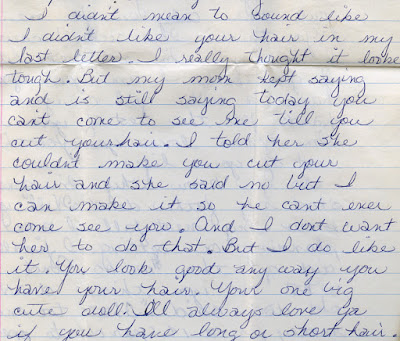 Now, however, things would change.  Emily's parents came to town and I was able to visit with her while they were here.  Her father liked that I was on the football team.

"What position do you play," he asked me.

"Fullback and linebacker," I said.

Emily wrote a letter later telling me about her parents' reaction to seeing me. 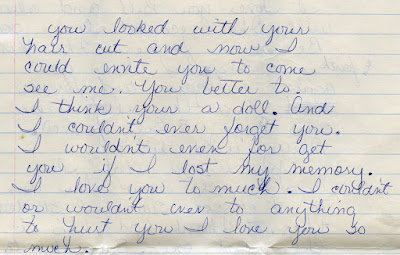 Those were the times.  I was rebellious.  So was Emily.  But like young Romeo and Juliet. . . .