While I Wasn't Looking

I got this message on Blogger yesterday.  I don't know to what they are referring, don't know what guideline I violated, but surely most of them somewhere in time.  I only tell you this in case the blog just one day disappears.  I'll have no control over that.  And if it does. . . well. . . I will be losing a lot of good stuff.  Occasionally, I go back and read old posts, and I am pleased.  I think I'm quite good at the 500 word spontaneous informal essay.  Sure, there are writing errors galore, repeated words, for instance, that would be fixed in editing, but by and large, as they once said, I find it all pretty fine.  But Google, like Twitter or Facebook or any other media provider, can pull the plug on me at any time, so. . . it is bothersome.  I should have backed up all of these daily posts, but at this point, the task would be enormous.  Maybe one of my tech buddies (Q--I only have one) knows how I can shortcut the process.

Anyway (as my mother begins so many sentences), I'll keep keep posting and hope the Google Gods don't eliminate me.

I wasn't planning to write more of the narrative today, but every contemporaneous thing I have to say this morning is some sort of self-promotion or, worse, defense against the prosecution, and is is surely shameful.  My life is turning down so many alleyways and around so many corners, I barely know where I am any longer.  I've emerged from the last few years of isoloation into a carnival wonderland. . . or maybe a hall of mirrors, I don't know.  I find that I am not alone in this, though.  The papers are filled with articles touting the efficacy of hallucinogens, MDMA, etc.  Marijuana, by and large, has been legalized.  Suicides are on the rise, and, it seems, nobody but Elon Musk is happy.  It is difficult to find anyone who isn't experimenting now.  I can't tell you--OK, I could but I won't--how many of my straight-assed friends are either tripping or rolling now.  Those rich, conservative, cowboy gymroids who call me a "shaman" have been dabbling with mushrooms of late.  I shouldn't, but I feel responsible.  One of my oldest friends, a fellow who for most of his adult life never drank and if he did had a single beer, has been doing all of it.  We live in the era of the Magical Mystery Tour, I guess.  Even my mother's retired neighbors are tripping. Dr. Thompson, where are you now?

Reality, it seems, is too much with us. 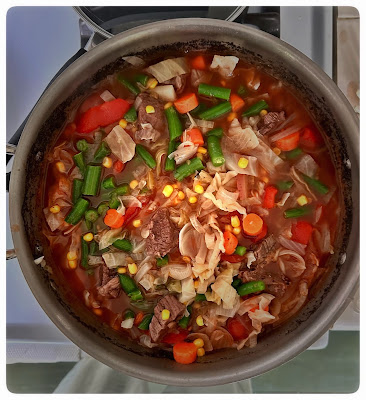 Meanwhile. . . or "back at the ranch". . . I spend my time cooking.  This is the stew I made for my mother and I after that delicious Thanksgiving day turkey.  My mother's next-door neighbor is 98 and lives alone. She has children, but not close by, and so on Thanksgiving my mother took her some of our dinner.  And, according to my mother's report, she loved it.  I don't want to give the idea that this woman is feeble.  Not at all.  You can find her any day doing yard work, dragging trash cans to the curb, picking up fallen limbs. She is thin and stately and of striking visage.  She still drives, does her own marketing, etc.  But who doesn't want to be thought of, and last night I had my mother take her over some of the stew.  Food is for sharing.

I had dinner with my art and travel buddy yesterday.  We sat at the bar of one of my favorite Italian restaurants and had delicious food and drink. 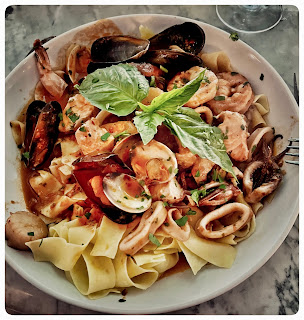 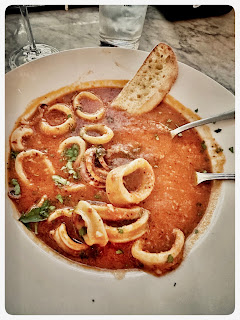 The sun was out and the light was simply magic.  I wanted to live in the moment, to stretch it to infinity.  I didn't want to stop.  I simply wanted to eat and drink some more.  My buddy, though, had obligations, so we paid up and walked out into the enormous day.  Because I am limping badly, he told me to wait at the corner and he'd pick me up.  He is driving his mother in law's car, so I couldn't recognize it.  I was at a stop sign, and I tried to get into three different luxury vehicles that were not his.  Quite embarrassing but funny, too.

When he dropped me off, I didn't have my new iPhone.  I drove back to where my phone was still sitting on the bar.

I sent some recipes for buttermilk fried rabbit to my mountain buddy.  I sent it around to a lot of people, actually, all of whom wrote back saying that they didn't like rabbit.  "Really?" I replied.  "What about squirrel gravy?"  But I thought my mountain friend would respond differently.  He once shot a woodpecker with his pellet gun, a highly illegal act, and he felt so badly he cooked and ate it.  So maybe rabbit didn't seem exotic to him.  His reply was good.

He also sent me a video of Crazy Larry dancing with his wife and her girlfriends at a bar in his little redneck/hippie community.  Look at Crazy Larry go!  He was a career NASA engineer, now retired.  Larry drinks and falls down, but he is saving nothing.  I find it just more evidence of the World Gone Mad.  Something happened while I wasn't looking.

I guess I won't be writing more narrative today after all.

For some reason, YouTube will not let me upload the video, nor will Blogger.  I'll just have to give you the (link).