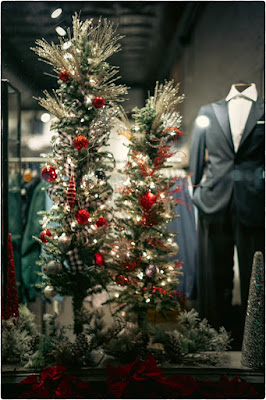 I'll step back from the bildungsroman this morning so that I can update a report on. . . me.  What?  Oh, yea, the other is about "me" too, but you know. . . never enough "me."  I feel the need to cotnemporize a bit.  There should be a bit of holiday narrative, too.  Right?  What?

Suddenly, I have the old Christmas panic.  I didn't put up a tree or any decorations this year.  I was going to.  Remember?  All the early Christmas playlists?  The old sophisticated holiday spirit?  Yea.  I haven't been listening to holiday music, either.  I crapped out on some get togethers and holiday parties, too.  I have that other Christmas spirit right now, the one with "malaise" in it.  I thought to keep it at bay this year.  Selavy.

Of a sudden, though, I need to get things to prepare for Christmas dinner.  Were it not for my mother, I wouldn't bother.  And it is not even as if she cares.  We could eat a Costco chicken as far as she's concerned.  But I feel the need to make it more traditional for some reason.  So today, I'm off to buy "the fixings."

On a bad knee.  No, not bad. . . terrible.  The pain now is a 12 out of 10.  I made a wrong step coming out of my favorite bar with a couple of gymroid friends last night and lurched nearly to the ground while making a sound like a wounded baby elephant.  It was horrible.  I need to get to an orthopedic clinic today.  I need to.  If I can find the time.

The knee thing has really brought me low, I have to say.  I thought I had Covid the other night.  I couldn't get warm.  No matter how high I turned the heat, I kept shivering.  My body ached.  I was overcome with heavy fatigue.

I was better in the morning.  I now think it was some bitter depression over losing another part of my body.  I don't have any left.  That's not true.  The tibia and fibula on both legs are fine and I have seven ribs on my right side that have not been broken.  But there is nothing else, nothing at all.  So, I think I was just grieving this whole stinking thing.  I don't want to be cut on any more.

There is fun news, though.  I got a new iPhone 14 Pro yesterday.  Wait until you see my cocktail photos now! 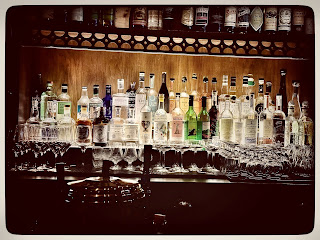 My mother upgraded from my old phone to my last phone, from 6 to X.  I told her I would get her a brand new phone, but she wouldn't hear of it.  While we were sitting in the AT&T store, I was working the crowd.  I'd met the two employees when I went in to buy the phone a couple weekends ago.  They had a World Cup game on the giant t.v. and while they set up my new account, we all watched an incredible game that went into overtime.  Yesterday, there were a couple of other customers there, so my mother and I sat down to wait.  One of the women there looked at us and said, "You two look familiar."  Then she looked at me.  "Did you go to Malcolm X High School?"

"I thought so.  What year did you graduate?"

I was wracking my brain trying to recall who she might be.  I told her the year.  She graduated three years after I had.

"You would have been in my brother's class."

When she had finished her business and said goodbye, my mother and I looked at one another with astonishment.

"What the hell was that?"

I promise you, I am unrecognizable from my high school days.  My mother and I, however, were provided head shaking fodder for the rest of the day.

It took a long time to download the info from my old phone to my the one, so I was chatting up my "friends."  Two women walked in.  They were friendly but formal with the two employees.  It turned out that they were regional and district managers checking out the store.  That might have put my new pals on edge. . . if I hadn't been there.  But I was.  And, I swear, the room became a party.

Back in the car, my mother said, "You are really good at bringing people out."

"I guess that's kind of what I did for a living.  It's just performance mode.  It is a natural reaction to people now, but you know how shy I am.  It was just something I had to learn to do at work."

We both laughed at the larger absurdity of that comment seeing that I will be spending another Christmas alone with my mom.

Now it is crunch time, though.  I need to buy some gifts.  I need to get to the ortho.  I need to get Christmas fixings.  And it all needs to be done today.  Tomorrow I get beautified and Friday I have lunch with my New Old Friend.  I will look like shit on Friday.  My "beautification" takes a few days to look "normal."  On my best days, I look like a mushroom, but after Thursday I will look like a mushroom with a bad haircut.  Sky is beautiful and it is against this backdrop I hang my own haggardness.  It is truly uncomfortable.  But she is game and tells me pretty lies to put me at ease as she surely will on Friday.  I can't wait.

And then it is Christmas Eve.  If I can walk, I'll be on the Boulevard doing the last minute guilt shopping and having drinks with the Christmas miscreants as I have been doing for decades.  Now, Christmas Eve is the only time I see them. The tradition started long ago when my ex-wife was just my girlfriend.  We went into the village's most popular wine bar and tapas restaurant in town.  A couple people we knew were there.  The bar was getting ready to close, but we kept it open by buying bottles of champagne.  Word got around, and the next year, the crowd had grown.  By the time we were married, it had become a Christmas Eve tradition after which the entire crowd was invited back to our house where drinks and food were waiting.  Then, good and lubricated, we would get into cars and drive very slowly with the lights off through mile after mile of neighborhood luminaries, the streets filled without a single break.  It was hallucinatory magic.

When I got divorced, the Christmas Eve party continued, but with more Xanax than before.  Over the decades now, the crowd has dwindled so that I wouldn't be surprised if there was not anyone else there at all.

Later, I will go to my mother's house, and we will try to decide whether we open our non-existent gifts on Christmas Eve or Christmas morning.  I will leave her late and come home to. . . well, let's leave that a few days and see.  Who knows?  Maybe Santa will drop a little treat on my doorstep this year.