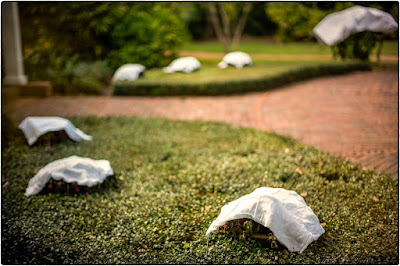 Christmas Day was freezing, and it went on seemingly forever.  I sat at home until my mother came over at 1:30.  What have we left to say?  I sit with her every day.  But we chatted and ate nuts and drank wine until the buttermilk turkey was ready.  And by gosh, it was the best turkey I've ever tasted.  By mid-afternoon, my mother was gone, so I cleaned up the kitchen and. . . and what?  I don't remember, really.  Nothing.  Something.  I was ready for bed before nine.

My knee problem is severe.  I won't bother you with it beyond saying that. Other people's illness or injury are like other people's dreams.  Just shut the fuck up.  But the impact on what I do now is tremendous.  I wake in the night in screaming pain.

I will get it fixed--one way or another.  But at times it seems that everything conspires against me.  I'm certain you have felt this way, too.  There is no winning friends and influencing strangers in this line of reasoning.  And so. . . .

Here was the end of my Christmas Day.  If you look at the dimensions of the picture of the t.v. room which was made with my new iPhone and the picture at the top of the page which was made with my Leica M10, you will see that the iPhone image is "fatter," that is, it is not as long or wide.  I like that ratio better.  They need to make digital cameras that are closer to the old 4x5 format.

Just an observation.  I'll get back to the narrative. 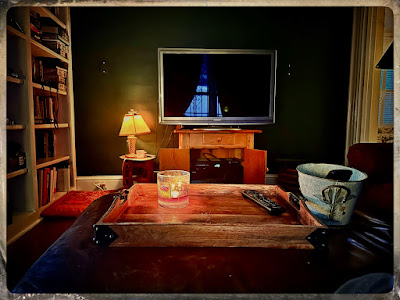 Emily's parents had purchased a new home in a new town and put their old house up for sale.  The reality was rapidly approaching.  We were sick with love.  What could we do?  We weren't going to run away.  All we could do was passively wait.  We clung to one another and spoke undying truths.  Promises were made.  Hearts were swollen.

By the time they left town, the school year had ended and it was summer.  Emily called me often.  She told me of the horrible people that she met.  She wanted her old friends, of course.  She wanted me.

The town she had moved to was midway between my parents' house and my aunt and uncle's further down the coast, so we passed her new town on our way.  My parents agreed to take me to see her one weekend when we were going to visit the relatives.  We stopped for a brief minute.  Emily showed me her room.  She kissed me and kissed me with all the longing love provides.  But we had to get back to the parents, and within minutes, it was time to go.  She was beautiful.  She was everything.  I had never been so lonesome and so utterly blue.

Wayne had turned sixteen and had bought a car.  Rather, his parents bought one for him.  Wayne had tricked it out with beads and paraphernalia and had given it a name.  He drove around with his girl and smoked cigarettes and had what seemed to me a grown up life.  Steve, refusing to be outdone, decided to buy a car, too.  He was only fifteen, but he had cash, and a small used car lot across the highway sold him an old 1950s beat to shit Hearse.  To seal the deal, his now stepfather co-signed for him.  When he got it home, he bought black and white house paint and repainted the beater with a brush.  It looked o.k. we thought.  It, too, was a hippie-mobile. 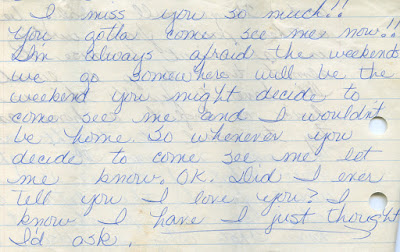 One day, Steve said we should go see Emily.  I was scared, but I said o.k.  He was fifteen, so of course he hadn't a driver's license, but it was mostly interstate between here and there, so we put on Nehru jackets and love beads and little round John Lennon glasses and headed off.  My head spun.  I'd travelled this road a thousand times, it seemed, but not without my parents.  There was Steve, underaged, smoking Marlboros, sticking to the speed limit, a wary eye on the rearview mirror.  If we get stopped, I thought. . . . We were on some home grown version of a Magical Mystery Tour.

Unbelievably, we found the house.  We were a surprise.  We parked in the driveway and went to the door.  Emily's mother answered, her face a toltec mask that hid whatever she was feeling.  Emily wasn't home, she said.  She was at a friend's house.  Come in, she said.  She would call her.

Emily's mother gave us something to drink while we waited.  The phone rang.  When she hung up, she said that a neighbor called wanting to know if everything was o.k.  They had seen the Hearse in the driveway.

It wasn't long before Emily came through the door.  We had to sit in the living room where her mother could keep an eye on us.  We talked in strained and strange ways, not in the intimate tones we always had.  This was a mistake, I knew, coming here.  There would be consequences.  Of that I was sure.

I don't know how long we stayed, but it had to be under an hour.  And as always, the return trip was twice as long.

Emily called one night and said her parents were not happy.  They did not want her to call me any more.  Long distant calls were expensive, but she had a plan.  She began giving the operator someone else's number.  It was free to call me that way, she said.  She didn't are about those other people.  She loved me.  That was all that mattered.

One day I got a letter.  The phone company had called her house.  They wanted to know if anyone had been calling my parents' phone from there.  The shit, as they say, was about to hit the fan. 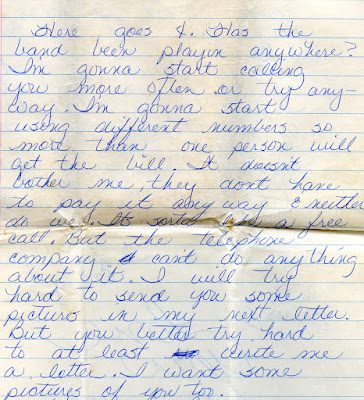 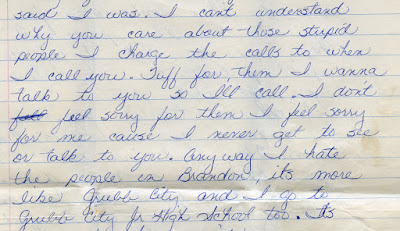