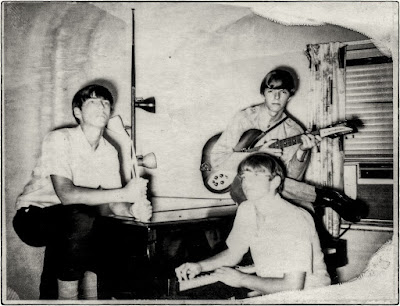 Things were getting no better at home.  My parents were in a perpetual fight now, and the arguments were escalating.  I couldn't just sit and watch and there was no way to escape it in our small house, so more and more I spent my nights out with friends.  Arguing parents couldn't really tell me to stay home.  There were more nights out with quarts of beer.  We began hanging around the pool hall.  One of the boys Steve knew had become something of a hustler and was beating everyone and winning money at the pool table.  When things closed up, we'd go on "adventures."  Once, we climbed the back of the drive-in movie theater, rotten boards breaking under our feet until we go to the very top and could peer over at the field of cars.  We were stupid, of course, and waved to the crowd.  We knew then that we had to make a run for it, but getting down was even slower than climbing.  When we finally hit the ground, we had to make our way through swampy shrubs until we got back to open land.  Another night, we climbed onto the roof of the shopping center.  We ran around up there until a cop saw us and yelled for us to come down.  We hightailed it across the long roofs until we found a ladder that would take us halfway to the ground.  By the time we had jumped, the cop car was coming around the back of the building.  We took off for the woods while the cop yelled for us to "halt."  And then a gunshot rang out.  We were just inside the tree line and all three of us hit the ground.  Surely it was a warning shot, but we slithered our way to better cover before we got up and ran through the steamy night.  We jumped a fence and ran through backyards until we hit the street.  We saw a cop car come around the corner and took to running through backyards and jumping fences once again.  As we were flying through the dark of night, I hit a clothesline right at neck level and, like some Looney Tunes cartoon, went flying feet over head, before I hit the ground.  I was up again instantly, but my neck was sore for days after.  We had, however, escaped once again.  We knew they could never catch us.

Escape was the thing.  Secret agents abounded in movies and on t.v., and that is what they had in common.  They were all Houdini-like in their ability to get out of jams.  They were always, just at the last moment, able to "get away."  Nights when we weren't running from some authority, my dreams were filled with escapes through secret doors and over rooftops.  Always, I felt, something was chasing me.  It was everything. . . my house, my parents, other boys.  I was just running away from it all.

But Wayne and Steve had taken to something else, too.  They were checking doors.  Back doors, car doors, and when they found something open, they explored.  They began taking what they wanted.  I didn't have the stomach for that.  I wasn't really the criminal type.  Heroes were more my style, but they were bent on becoming villains.  As Steve and Wayne grew closer, I was drifting away.

That summer, there was a James Brown concert in town at the big football stadium between Crackerville and downtown.  Steve and I decided to go, and that night we hitchhiked our way there.  We got seats not far from the stage, and man, Brown sent the crowd into a fury that night.  He danced and screamed until he seemingly fainted at which point a man brought out a cape and covered his shoulders, helping him to his feet.  It was all part of the act, of course, and when the horns hit the next note, Brown was up and at it again.

It went on like this for hours, and when he performed his last encore of the night, we all felt as if we had lived through something unforgettable.  Glad to have witnessed such an unbelievable thing, Steve and I made our way with the crowd to the street.

And that is when it got dangerous.  There had not been many white people at the concert that night.  Maybe six or ten.  And as we walked down the darkened street, a group of boys began yelling at us.

"Are they talking to us?" I asked Steve.

"Let's cross the street," he said.

And so did they.  And before we knew it, we were surrounded by them.  There were a lot of them.

"Hey white boy, give me your money."

We didn't know what to do.  We just looked straight ahead and kept walking.

Somebody grabbed Steve's arm and he yanked it away.  And suddenly, I was on my knees.  Somebody had hit me hard in the neck right below my ear.  And then the fists and feet came flying.  We were getting pounded good and hard, and the adrenaline began pumping.  I jumped to my feet and began running right behind Steve.  The gang of boys were chasing us, but they didn't stand a chance.  We were supercharged with that magic elixir that gives you, for the moment at least, superpowers.  We ran to a lighted intersection where the traffic from the concert was heading to the highway.  There was a cop directing traffic and we flew straight to him.

"We just got attacked by a gang back there. They were trying to rob us."

The cop just looked us, then glanced back at the direction from which we came.  He shook his head.

"What are you boys doing here," he said.  Then he held up his hand to stop the line of cars leaving the concert.  He walked up to the window of the driver and said, "Give these boys a ride out of here if you would."

We got into the car with the stranger, and without many words, he gave us a ride to the highway and dropped us off.