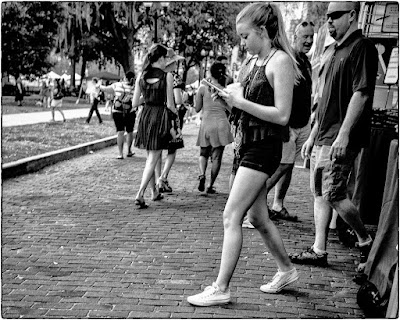 My world was getting larger, weirder, and more dangerous by the day.  The complexities of adolescence were compounding.  The rougher boys were leaning into "coolness," and that is what surrounded me.  Maybe I was genetically predisposed to going out on the far end of the limb, or maybe I was merely being cultured too.  I learned to inhale a cigarette from my older, criminal cousins on a family trip to Ohio.  I also had my first beer.  Donny was older than I and a wild one by anyone's yardstick.  His older brother bought beer and we went up into the urban woods above the town.  There we spied on his brother's friend who was having sex with a girl on a blanket.  We threw rocks and broke windows at my cousin's school.  We stayed up all night and slept in lawn chairs in the detached garage.  I knew I had been plunged into the dystopian pool of the delinquent.  I knew something else, too.  It had given me a sharp edge on the uninitiated.

Allen's father who already had it in for me told his sons I was off limits.

"Bobby told him you had a pack of cigarettes in your pocket," Allen said.  Oh, man, I thought.  This is bad.  When I saw his father in the yard the next day, I asked him why I couldn't hang out with Allen.  He explained.

"I had a cigarette pack in my pocket," I told him, "but it didn't have cigarettes.  I used it to carry firecrackers," I lied.  Somehow, the lie worked.  Firecrackers were o.k.  They got me off the hook.

I was a very clever boy.

One day, Tommy and I raided his father's liquor cabinet.  We took little bits of liquor from every bottle and put it in a coffee can from which we shared sips.  It wasn't long before neither one of us could stand, and for the next several hours, we just lay on the floor, spinning and howling with laughter.

One night, one of the kids at school had a party at her parents house.  She was part of the school's "inner circle," a member of the faux sorority, Tri-Hi-Y, a cheerleader sure to be on the homecoming court, a member of Student Government, etc.  Her house was far from mine in a newer, more expensive neighborhood close to the new junior high.  Most of the kids there had known one another for years having gone to the school with which part of mine was merged.  I was "new meat," so to speak, known but not.  An older girl thought it was a good idea to take me to a dark corner of the party where we could make out.  She French kissed me.  Sure, I knew how to do that.  Then something bizarre occurred.  I thought maybe I was having a stroke.  My eyes popped wide.  The whole of the right side of my body went stiff, muscles cramping violently, electricity pulsing across my synapses.  I couldn't swallow, I couldn't scream.  It reminded me of the time I'd grabbed the metal handle of an ungrounded refrigerator, only stronger.  This was like some carnival trick by a mysterious, dark magician.  It was secret knowledge only known by those members of some crazed, restricted coven.  And now. . . I'd been initiated.  Oh, man, oh man, what a trick.  Her warm breath upon my neck and earlobe, she whispered something inaudible, and then, in a flash of lightning, her impossible tongue went several feet--or so it seemed--deep into my ear.  She put my hand between her legs, and kissed me once again.

Walking home after the party, I was certain I would go to hell when I died.  I was living in a desert peopled by devils and demons.  The universe was being revealed.

What in the hell could I do?