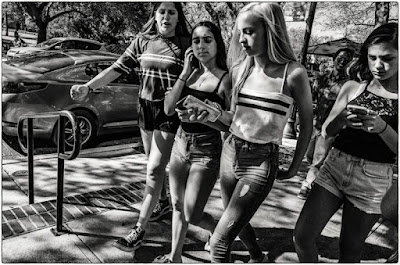 Band stuff was going well, and at times, I was playing with two different groups.  One was called "The Circle of Confusion," and was a cleaner, kinder version of music.  The lead guitar player and singer was in the school choir and had a nice but refined voice.  The music was. . . acceptable to all audiences.

The other band was called "00 Sounds."  We were a three man band.  The lead guitarist and singer, Wayne, was a couple years older than I.  He played a Rickenbacker guitar like John Lennon and was especially talented. The bass player, Steve, had a Hoffner just like Paul McCartney's.  I had Ringo's Ludwig drum set.  This was the edgier band of the two, the hair a bit longer, the attitude definitely more punk.  Wayne was the first guy I knew who had actually had real sex.  He told unbelievable stories that I tried to imagine.  One day, Steve went over and boinked Wayne's girlfriend, but it didn't break up the band.  Somehow the two of them seemed even more bonded after that.  Me?  I was just along for the ride.

Wayne decided that we should go out and buy collarless jackets like the Beatles wore.  We had to get black suede boots as well.  We were getting gigs left and right, and Wayne had gotten us a "manager."  He booked us gigs all over town.  We would load up our instruments in his car and drive to some new Youth Center or to what seemed to me "mansions" on the lake where we played for kids from the more affluent parts of the county.

I had taken to wearing my Beatle boots to school along with tight pants and one of those wide "mod" belts.  I had "the look."  One day, someone at school told me that a certain girl liked me.  Her name was Carol.  She was in the grade above me and was one of those school "sweethearts."  She was a cheerleader and, as they say, the rest of it.  But I didn't know much about her.  One night after band practice, I asked Steve if he knew her.  They were in the same grade.

For some reason, this sent Steve into a rage.  First he laughed cruelly and said she would never like me, but then he got really mad.  I couldn't figure it out, but he went into a frenzy he punched me in the arm before he left.  The punch had hurt, but mostly my feelings.  I guessed I wasn't supposed to be the attractive one in the band.

A few days later, Carol came up to me in the hallway between classes.  She was obviously of a different caliber than I, well-mannered, conservatively and expensively dressed. . . .  I had no idea what to do.  We talked for a bit before it was time to go to class.

Later that day, a girl passed me a carefully folded note.  It was from Carol.

"I like you," it said.  "I think you're cute.  Call me if you want."  She had written down her telephone number.

We talked on the phone, as kids would, for many nights before she asked me if I was going to the basketball game on Saturday.  You bet, I said.

I met her there.  She was with some girlfriends but left them to sit with me.  We were in the bleachers, sitting in the back.  I don't know what I was thinking, and I definitely will never know what she was.  But I had put my arm around her and had snaked my hand under the front of her Angora sweater.  She didn't move it.  Ever so slowly, millimeter by millimeter, I creeped it up and ever closer to her breast.  She covered my hand with her arm, but only to keep it out of view of the crowd.  My hand went under the bottom of her brazier, and for the very first time in my life. . . !

When the game ended, she went back to her friends and I walked home in the dark, dizzy and spinning.  The wicked world was welcoming me with open arms.  I didn't know if I was going voluntarily or if I was simply falling.  I was scared, of course, but bad things have a certain charm and allure.  My life was taking me places I wasn't prepared to go.