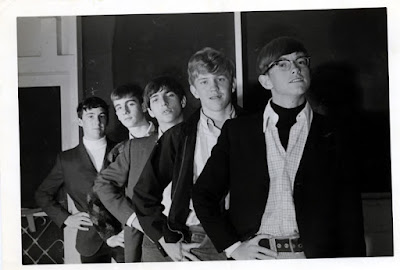 (The Circle of Confusion)

Tongues will wag.  I don't know who told who what or what someone might have seen, but when we went back to school the next week, Carol was called into a counselor's office, and when that meeting was over, so was I.  Carol was back to being a school sweetheart and I was branded as someone from the wrong side of the ideological tracks.  I felt more as if I were standing right on them.

The phone calls to and from Carol were done.

The next Saturday, I went to another basketball game.  After the game, I ran into some kids from my old school that I hadn't seen since our class had been split.  Jeanette.  She was the first girl in our class to develop.  She was singly responsible for raising our curiosities, and for the first time, we boys were looking at girls in something less than a chivalrous way.

But Jeanette was in poor health, or at least it seemed.  There were days when she left school halfway through the day.

One day, the girls and boys were separated.  The girls went to the cafeteria where the shades were drawn.  The boys went to the playground.

"I don't know.  They said they were going to see a movie."

When the girls came out of the cafeteria, they each were clinging to a small pamphlet.

One day, Allen and I had a great idea.  We went to the teacher and told her we were sick.

We didn't get to go home, though.  We were marched over to the school nurse.

We were each given a cot in a bare cement block room.  We stayed as long as we could, about fifteen excruciating minutes.

Jeanette had grown even more powerfully into adulthood when I saw her at the game, and I found myself in a darkened corner of a hallway with her.  We were making out when she said, "I have a boyfriend.  His name is Jimmy."

I have no recollection of what I replied, but it must not have been good.

The next week, I was standing with some boys when I got shoved against a metal locker.  It was Jimmy.  He was older than I, about the same height but thicker.  His nose was flattened like an old fighter who'd had too many rounds.  At that moment, though, I had no idea who he was.

"Jeanette said you wanted to fight."

I didn't want to fight, but it was evident that everyone standing around us wouldn't mind.  I looked at Jimmy trying not to flinch or look scared, but it didn't feel as if that was working.

"I didn't say I wanted to fight you."

"Are you calling Jeanette a liar?"

I didn't know the right answer to this one, so I just looked at him.  Just then the bell for the next class rang.  Jimmy said he would see me later.  I didn't want to see him later, and I didn't wait around after school.   I made it home in record time.

That Jeanette sure was a peach.

It was always the older boys who wanted to fight me.  There was a boy named Allen, not my friend but a different one a grade above us, who had polio as a kid.  It left one of his legs gimpy and he walked with a limp, but his upper body was muscular and strong.  Allen was a real thug, a bad kid with a tough older brother.  They enjoyed breaking windows and stealing things out of open cars. . . real criminal stuff.  One day I was standing with some friends in the morning before our first class when Allen walked up and said he was going to kick my ass after school.  There was no reason for it.  It was just what Allen did.  I was distracted from my studies for the rest of the day.  Getting my ass kicked by Allen was all I could think about.  I dreaded the bells that ended each class period as they brought me closer to what had been circulating around the school all day.

"Are you going to fight Allen?"

By the end of the day, I was resigned.  I would have to fight.  There was no way around it other than running away.  That would work as Allen couldn't run very well, but you know, it was like prison rules.  Run away and get your ass kicked every day.  As I walked to the end of the hallway into the open yard, Allen was already there waiting,  a large group of kids standing around him.  Allen was already bating me, talking shit and looking mean.

I was surprised when I saw the look in his eye.  He hadn't expected this, I guess.  He was a bully.  What could he do.

He started doing a little limping victory dance as if he'd won the fight.

The kids who were left looked at me.  I shrugged with relief and started walking home.  That night, I got a call from Steve in the band.

After that, though, Allen would nod to me in the hallways.  Sometimes, I guessed, you just had to take the beating.