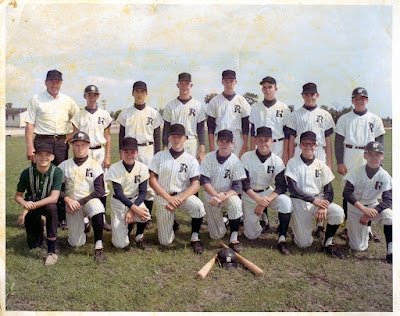 During and after football season, I wasn't playing in bands as much.  And even though I had felt vindicated by the football team's winless season, I was still haunted by my choking in front of an expectant crowd on "that play."  Indeed, that moment would haunt me forever.

The weather was warming and spring was coming.  I decided to try out for the school's baseball team.  I had been a great little league baseball player.  I was chosen for the All-Star team every year.  I had pitched a no-hit game, and every time I pitched, our team won.  And I always batted clean up.

But I had become a band boy rock star, and I hadn't played baseball at all for two years.  Maybe it was the turmoil of life around me that made me want to play sports again.  And now, I wanted to cleanse myself of the "great choke."

Allen, my down the street neighbor who I didn't have much to do with since we started junior high, was also going out for the team.  I went to his house with my old glove and started throwing balls with him.  I had lost my arm, though.  I had little strength or control in my throws, and I was flinching when fielding grounders.  I'd always assumed that I was just a natural at sports--any of them--and would always be a star.  Over the days and weeks, though, I began to regain some talent.  It took me a while to swing the bat well again, but by the time tryouts began, I was fairly ready.

I didn't perform like a superstar, but I felt my tryout had gone o.k.  I was better than a lot of kids, I knew, and thought there was a 50/50 chance I'd make the team.  When the coach posted his picks outside the door to the gym, my name was there.  Jack S., who thought he should have made the team, wasn't chosen. He confronted me and was ready to fight.  I couldn't understand his anger toward me other than he considered me a pussy band mod, I guessed, but my feelings were deeply hurt.  I said I'd fight him, but without much conviction.

He turned to storm in and confront the coach.  When he came out, he was still angry but fairly succored.  He said coach told him that he would not be happy sitting on the bench, and Jack was convinced that was where I would be.  He would get more playing time in the Pony League, coach told him.  So he said.  Then he turned with a wounded smugness and walked away.

Once again, I had to get a crewcut to play on the team, and I did.  Practice began right away, and I was getting better each day.  When the season started, I played right field.  Early on, I made a spectacular catch and coach was beaming.  But when I went to bat. . . my vision shrunk.  The kid pitching had the strongest arm I had ever faced.  I couldn't see the ball.  I didn't even try to swing on the first pitch.  Strike one.  I took a wild swing at the second pitch that was way outside.  I could feel the blood rising in my neck and face.  I stood steady and took an outside pitch.  The count stood at one and two.  The next pitch came at lighting speed and I think I started my swing after the ball was in the catcher's mitt.  I could feel the astonished looks from the bench as I walked back with my head down.

"Man, what were you swinging at?"

Coach benched me the next inning.

At one time, I'd been a really good hitter, but now I couldn't seem to hit shit.  Coach took me out during my P.E. period to give me batting practice.  I got better but not great.

When our star pitcher broke his finger playing on a weekend basketball league, our coach was furious.  We needed another pitcher now, and I thought it should be me.  Coach thought otherwise and chose another fellow.  I was stunned.  He didn't even give me a chance.

For the rest of the year, I played about half the time.  Our team was a good one, though, and we won the county championship.

The school year was winding down now, and we felt it.  We would be going to the high school in the fall as an alien underclass.  It would be three years before we felt this large again.  For many, there seemed some terminal desperation in those last few weeks.  I wasn't even sure if I wanted to go to high school.  None of my old friends were in school any longer.  Wayne, Steve, and Mike had all dropped out.  With the trouble between my parents at home, I never had anyone over.  I had become belligerently anti-social.  I was happiest on my own.

When I look back at my 9th grade yearbook, it is remarkably empty.  I had not asked anyone to sign it.  What I do have, though, is a long, heartfelt letter from the girl that nobody would sit next to, the girl who people had turned into a cruel meme.  It was a sad but wonderful letter, a confession of a girl with huge emotions and more writing talent than I could ever dream of.  In it, she confessed to being lonely as an outcast, but my friendship, she said, had kept her warm.  Though we were not close, she thought of me often, and the thought had given her comfort.  She wanted to tell me how much I had meant to her the last three years.

I'd never read anything so personal nor heartfelt before.  I was swollen with compassion and confusion.  I knew that the world was a cruel and often lonely place, but her letter taught me that I didn't know anything about anything yet.

That letter would fairly shape my future.