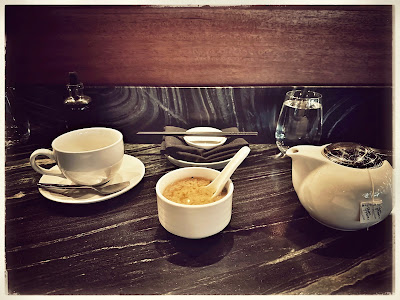 Don't expect much (as if).  I have been up since 4:00 am and ready to go back to bed.  But I have read the papers and formed my opinions, so I need to. . . opine.  But first, the psychological weather report.

After a long day of beauty and nothingness, the weather being gorgeous and my life being non-eventful, I made a trip to my mother's.  Oh, she and my cousin came home a day early, so my time was artificially bifurcated again.  I went early and sat until five when I thought I might try a sushi dinner at a place I used to love but haven't been to since before Covid.  The restaurant doesn't open until five, so I'd be an Early Bird without the special.  Five o'clock is not date time for dinner, so I was able to find parking close by and hadn't far to limp.  Eating sushi alone is not embarrassing as a dinner alone elsewhere might be.  The place is dark but well-lighted (you know--not brightly lit) and has the best music of any restaurant I've ever eaten in.  It is large and has a connected bar.  It is the only sushi bar I've been in that can serve up "worm killer" (i.e. whiskey) after dinner.  I, however, being a totaler, ordered green tea.  Which was excellent, by the way.  My green tea at home is always bitter even though I have an induction pot that has a green tea setting for the proper temperature.  I can't figure it out.

Miso, edamame, tuna kobachi, sushi rice.  I'm like the Rain Man.  Whatever.  Don't judge me.  I ate alone, so of course I heard the music.  You can't hear it well, but if you are interested. . . (link).  The food was sensational, but I longed for. . . you know.  A romantic meal for one.

When I had finished, I decided to go to the grocers around the corner and buy a pint of chocolate fudge ice cream.  Without the usual scotch, I had to have something.  But god. . . I wanted that scotch.  The meal felt incomplete.  Twenty-one days of Dry January under my belt and I still have ten to go.  WTF kind of month is that?!

Back home, though, I was antsy.  I had no desire for a night of t.v., so I grabbed my Leica and got in the car.  I would shoot some nighttime photos.  And I did. . . unproductively. . . and that, too, got to be boring alone.  I don't mind being alone, usually.  Never really have.  So what's wrong?  Why of a sudden?

Back home, there was nothing to do but consume the ice cream.  Than some gummies.  I was in bed just after nine.

And that's how I spent (yet another) Friday night.  Maybe it's the weather.  Maybe I already have spring fever.  But man. . . I feel a deep and persistent longing.

"Dude, you need to go out.  Women just be begging, dog.  It's fucking crazy out there."

Is it really like that, as advertised on the covers of 1950s dime novels?  Lurid, sex-crazed women?  Femme Fatales?

Not what I'm looking for.  I'm so much cooler than that.  Call me The Cooler Kid.  Or Kid Cooler.  Take your pick.

"All the other kids with their pumped up kicks better run, better run. . . ."

Whatever happened to those guys, anyway?  They were from right here in my own hometown (link).  We ARE known for our supply of boybands, though.  The big producer for them lives just down the street.  Backstreet Boys, N'Sync, O-Town--never can keep them straight.  Not Lou Perlman, though. The other one.

Just looked Foster up.  Just the drummer is from here.  They were an L.A. band.  I need to keep up.

So. . . I read a negative critique of "Emily in Paris" in the Times this morning (link).  Really?  The show is an exaggeration?  It is unreal?  That's not how real life works?  Emily is shallow and that person wouldn't succeed in REAL LIFE?  Where are the concerns about climate change?  Where are the homeless people and the Moslem train bombers?

Shit, I was fooled.  I thought all this time I was watching a documentary.  Oh, well.  I guess I'll go back to all those other serious t.v. comedies.  You know the ones that aren't exaggerated, the ones with the characters who are drawn from harsh reality.  The one's where aliens come to earth in human form and. . . and. . . you know. . . the more realistic ones.

Or I will read more Michel Houellebecq.  I don't think, though, the critics would approve of that, either.

But for all of you writing college term papers, that article will give you good critical guidance.  Just apply the principals to any art form.  Try painting, for instance.  Start with Goya's transformation from Royal Court Portraitist to his later, gruesome work.  Exaggerated, non-realistic characters.  Focus on what's NOT there.  That is obviously just as important.  His work is TOO two dimensional.  I mean, it's a painting. . . still. . . .

I don't know why I seem to be defending the show, though.  I could barely watch Season Three.  It was horrible.  I think that was due to bowing so much to the negative criticism of the seasons past.  When you try to please everyone, the old saw goes, you end up pleasing no one.  I think this is a case that proves the rule.

I told you not to expect much this morning.  If you are still reading. . . don't blame me. 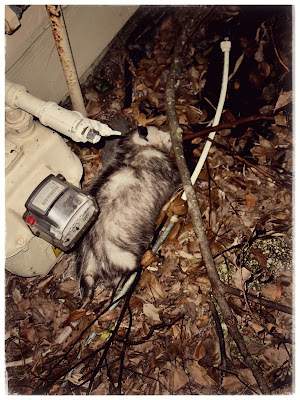 So let's get real for a second.  Real real.  I heard what sounded like the rattling of pipes under my house yesterday morning.  Shocked, I listened hard trying to figure out what it could be.  Yesterday, sitting out on the deck talking on the phone and regaling my friend with the 100 pound possum tale, I swore I could smell something.

"I think it might have died under the deck," I said, getting up to follow my nose.  When I stepped behind the house, I saw some fur.  At first I thought it a dead cat because it was small.  Shocked and scared, I creeped up on it fearing it would move.  This is what I found.  It's not the 100 pound possum but something young.  Why?  What had killed it?  Why did it grab hold of my pipes and die?

This is the harsh reality of life--terrifying death.  That is what "Everybody Hates Emily" should be about.  Then it would be a meaningful. . . comedy.  Something like Dostoyevski's Underground Man or anything by Kafka.

But critics would probably complain about that, too.

It is not yet dawn, but the world is becoming visible.  I will finish my coffee, eat a slice of the caramel pecan thing I bought last night with the ice cream, and try to go. back to sleep.  The forecast is for clouds and rain.

I will attmpt to fight the gloom.