Not A Lot On My Mind 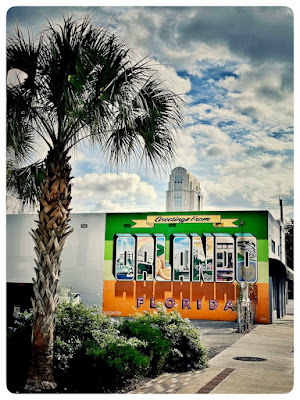 Up at 4:30 again today.  I thought that maybe I had a lot on my mind.  Yesterday at the gym, however, I was asked by a retired nurse how my ortho visit went.  My obviously painful limping and the potential of my possibly losing a limb has become a topic at the Physical Culture Club.  I told her that I'd gotten an injection.  She said, "Oh. . . you won't be able to sleep."

She went through other side effects, too.

"I asked the doc if there was anything I should look out for.  He said, 'Nah.'"

I thought that the shot had already done wonders for my knee yesterday morning even though the ortho told me it would take two weeks.  By the end of the day, though, I once again dreaded going from room to room.

At least I don't have to get up to pour another drink!  The start of my sixth day of no drinking is about as exciting as day five was.  I am sure I've cut my calories by a quarter if not a half.  It's working well.  I've gained two pounds.

But I have saved a hundred bucks or more.  I went to lunch at a Spanish restaurant I like yesterday afternoon.  Had lentil soup, grilled octopus, and. . . water.  I didn't like the restaurant as much.  But when I got the bill, wow, it was a whole lot cheaper. 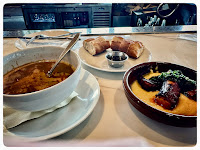 The afternoon dragged on.  I went grocery shopping, limping through the stores badly.  Yes, plural.  Whole Foods sucks for certain items.  Yogurt, for instance.  And mushrooms cost twice the price that they do anywhere else.  But it is difficult to find tempura at the general grocers.  Luckily, I have a Whole Foods, a Publix, a Trader Joe's, and a Fresh Market all within a mile and a half of my house.  And many Asian grocers and specialty food stores, too.

Walking on a painful knee after getting up at 4:30 had worn me out, and when I got home I thought to take a brief nap, but just when I was ready to lie down, I got a text.  One of the gymroid developers wanted to know if I was home.  He wants to buy some big photos.  I told him I had burned or put into storage much of my work, but I had a few things at the house if he wanted to come by.  He has a big house in the richer part of town on a big lake next to my Viva Las Vegas nemesis, the comedian and film "star," and he has a lot of wall space to cover.

I began picking up the stuff that I let lay on most surfaces over the course of two weeks between my maid services thinking, "Jesus. . . you're a pig."  Just as I finished, he was knocking on the door.  He's a builder and a real estate guy, and I've taken him home one drunken night and saw his modern house, and I imagine what the interiors of his places look like.  Big clean, white, and full of space.  My house is the opposite--old, cramped, crammed with eclectic odds and ends. . . not so very typical.

One never knows how people see them or what they expect, but I think most people imagine me living with bean bag chairs and lava lamps and unframed posters on the wall.  I don't know.  But when people come over, it is always the same reaction.  I am always a bit paranoid, however, being the poorest man with the smallest house and the lowest income in the neighborhood.  I can barely afford to keep the place up.  And, indeed, when we walked out to the garage to look at some stored prints, he looked with a builder's eye.

Yea, I know the but.

He hadn't realized the garage and apartment were mine, too.  That is usual.  They look like two separate places.

I don't imagine it.

I showed him prints.  He wanted this one and this one, and the next one. . . wait. . . hold these out. . . .  I showed him prints on tissue thin Japanese papers, encaustic work, photos from the way back, photogravure prints, platinum and palladium prints, hand colored works, photo transfers. . . street photography, landscape and architectural stuff.   It was fun.  I had forgotten how much I used to work at it.  He couldn't make up his mind.  He said he was overwhelmed.

"If you want, we can go to my storage unit.  That is where most of the work I have left is.  Hundreds, maybe over a thousand,  prints of all sizes."

He wants to go.  He chose to leave with one of my newer prints.

"Just get me some gummies," I said.

Life post-Covid has been. . . interesting.

Last night, Q texted me.  He had gotten the same message from Google about his blog post as I had gotten.  They had put his post behind some warning and had deleted some of his text, he said.  Wait!  What?  I thought he had shut down the blog.  Oh, no. . . it was private, open only to "members of the blog."  I don't even know what that means, but apparently, I wasn't one.  Well. . . you know what they say, anyplace that would have me for a member. . . .

But yea. . . apparently Google is on some sort of moral rampage.  It made me go back and look through the years of blog postings, and I see that the formatting on many of them is now all wrong.  I have no control over this, and I think that maybe, if I want to make things archival, I need to make my own site to house the blog.  I don't know enough about the internet to know if some large entity would still have control over my material, but I need to find out.  I hate that someday my stuff could disintegrate or simply disappear.

Dawn is still far off.  There is a great chance of rain.  I feel I should go back to bed, but I am pretty sure I would not be able to sleep.  Out of boredom and fatigue, however, I might try.  I little classic jazz played low, a soft light. . . maybe just to think but hopefully to dream.

My buddy wants me to go out with him on the big lake in his boat with some other people this late afternoon, but I have declined.

If I were drinking, maybe.  But these are all younger, gymroid guys and gals, and I'm fat and lumpy.  I don't want to smoke dope, so I would be the paranoid, hyperaware one sitting on a boat cushion twisted sideways looking at "the fun" with a painful grimace waiting for something to go south.  In February, maybe, when I am svelte and rope-like.  You know. . . imperially thin.

I have been invited to a factory party at a factory city bar this afternoon, too.  Look at me!  But that's a "hard no," too, since I'm not drinking.

Perhaps I'm my own worst enemy, but I'd prefer to think of myself as a shy, contemplative fellow.

Here is what I watched last night before going to bed.  I think some of you will enjoy it.  I'd never heard of this woman before although she is quite famous.  Embarrassing.  I'm not a fan of architectural photography, but I like this.  Imagine the effort to which she went.  I think Wes Anderson took some lessons there.