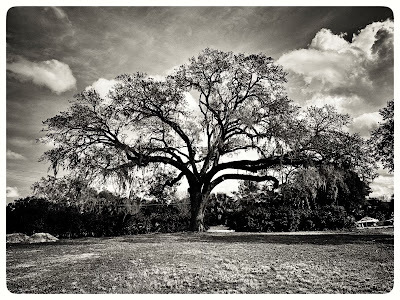 I've been searching for an hour for a picture to post.  I've got nothing.  I have a bunch, but nothing of relevance.  This is a tree I drive by on the highway in a field that is ready to be developed.  So the sign says.  I think to stop and photograph it when I drive past, but you know how that goes.  It is not a great sight, really, just extraordinary on an overdeveloped stretch of road.  I stopped a couple days ago, parked the car, and limped across the field with several cameras in order to take the photo.  The time was all wrong, early afternoon with the sun overhead.  The photo should be made at sunset.  Even then, though, it won't be a spectacular photograph.  But I made the effort.

In the common parlance, this is all I got.

Romeo and Juliet are suing Paramount for showing them nude in the 1970s film.  They are in their 60s now and say they have lived with the shame long enough.  Now they need $500 million to assuage the agony.  I've seen the film many times.  I saw it first when I was in high school, enough that I could say the lines along with the actors.  The film is gorgeous and true and made me love Shakespeare.  I wasn't shocked by seeing naked teens.  They were beautiful.  I was envious.  I wanted to be beautiful, too.  The fact that I wasn't shamed me, maybe.  I have lived with that shame for. . . .  O.K.  I'm being sarcastic.  It is just a wonder to me that people abhor the human body as much as they do.

But I've reached a part in "Upper Bohemia" where the author talks about being sexually molested by her stepfather.  She was very young, and the stepfather molested her older sister, too. They were in separate bedrooms, so neither knew about the other.  The author doesn't speak about it as traumatic.  She admits she fairly enjoyed it.  Her sister, however, who was subjected to more, developed some psychological problems because of it.  Later in life, the author says, when they spoke about it with their mother, she was angry and said that it was common, that her own father did the same to her when she was a girl.

I've spoken with many women about such things in my life.  They all deal with it in different ways, but it is something they deal with.  It always impacts them in some profound way.

Reading that chapter last night made me wonder.  Kathryn Harrison has written several books about her sexual affair with her father when she was an adult.  He was handsome, sophisticated, and she was attracted to him.  The varied ways in which people come to grips with their sexuality is overwhelming.

I didn't have sexual relations with another person until after most of my friends were much more experienced.  Oh. . . that will become evident when I pick up the Bildungsroman again.  I could have, but I was very emo.  Sex and romance were idealizations I had developed.  I mean. . . all I ever wanted was My Own True Love.

What the chapter made me wonder, however, is when sexual activities become "healthy" things for someone.  Surely it is different for each person, but what "thing" makes a person turn a corner on it?  It seems never to be a big deal for some, and for others it remains tragical throughout life.  The author of "Upper Bohemia" became a very productive and successful person.  I haven't read far enough to find out what happened to her sister yet.  But what shapes our individual desires and responses is fascinating.  As I have said previously, I think I wish I were a "fuck boy," someone who didn't connect sex and emotions as much as I do.  Oddly, the naked body is simply something fascinating to me.  It is not inherently sexual.  Hell, in most instances, it is the opposite.  We are disgusting if fascinating creatures.  Very few of us have the sort of beauty upon which others wish to gaze.  But the Europeans always seemed to have that shit together to me.  People walk around naked on beaches no matter the shape or condition they are in.  There seems not to be "shame" in being naked, of being human.  You see entire families of three generations sitting naked and see in an instant the natural temporal progression.  That doesn't mean they don't appreciate the aesthetic form, however.

But maybe I am only speaking of the French and German people, and maybe the Dutch and Scandinavians. And Italians.

I probably have it all wrong.

I do know that Freud had a field day with this.  Victorian society and all its self-imposed moral values were a ripe field for picking.

I have several friends who are practicing psychologists, and I may ask them about the development of the sexual psyche in humans. . . but I am pretty sure I will hear them with a large dose of skepticism.  Still, they will know much more about it than I.

I know that emotional intimacy and trust are things I desire and that they are bound to sexual desire, too.  I think that if you are still reading this piece of dung post, your head has already exploded, but that is the fascinating thing about all this to me.  How in the hell do we each develop such differing reactions to all this?  I mean for fuck's sake, Romeo and Juliet were beautiful, if tragic, idealizations of emotional and sexual awakening.  How in the hell can they sue?

Once I passed into early adulthood, I became more attractive.  I lived in hippie times and everyone, it seemed, was naked most of the time.  That didn't mean they wanted to fuck you.  It was just freedom fun.  I got used to taking my clothes off in public.  I guess we weren't so judgy then.  Pictures of my college girlfriend and me naked together hung in the college photo gallery many times.  John and Yoko, you know.  We weren't fucking.  We were just pretty young things.

I think it was healthier, but you can't find that written anywhere on the cosmic tablets.  Still, this time of the moral Taliban seems so very harmful to me.

This is about the most confused and probably the worst post I've ever written.  If you are still reading, I promise, tomorrow will be better.  I mean. . . how can it not?

The best advice I can give you was told to me by my parents when I was young.  Just keep your hands to yourself.

But that didn't really help Louis C,K. now, did it?