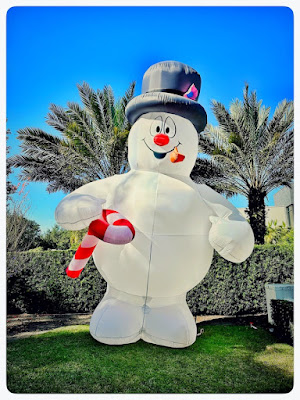 I saw this in the yard of a very affluent home yesterday.  It had to be twenty-five feet tall.  All I can say is people, time to take this shit down.

Wait!  I'm wrong.  I just looked it up.  The Twelve Days of Christmas doesn't end until January 5.  You still have a few more days.

That's what I get for being judgy.

I want to get back to the Bildungsroman, but I find that is not possible to do today.  My mind is scattered.  Brain.

"Moist January" is a "thing."  I first heard the phrase from my travel/art buddy when I asked him how sobriety was going.  Then I read it in The NY Times.  My best lesbian friend said she liked "Moist January," but I told her I wasn't sure we were speaking of the same thing.  Then today I read an article on "Mindful Drinking."  I guess that is in contrast to "Mindless Drinking."   The author's unspoken point, I believe, was that both mindfulness and alcohol put you in the present, a place we are not so often.  "Presentness" (have I coined the phrase?) (no--it is often referred to as "Nowness") is something that Baba Ram Dass prescribed in his book "Be Here Now."  I've used that as a guidebook since I first read it in college.  We live muchly in our heads in the past or in the future.  Strenuous exercise always puts me in the present and was my greatest tool against despair for many, many years.  Probably strenuous work would do that, too, but I don't know much about that.  After college, I used to try to meditate by sitting very still on the floor, legs crossed, focusing on something like a candle's flame.  Didn't work for me.  My knees and back were too much of a mess even then.  But running--now there I could focus on the present.  I could empty my mind and focus on the way the movement felt.  I had, of course, a literary awareness that brought forth the question, "How do you separate the dancer from the dance?"  Or the runner from the run?  Rather than focussing on the time, I'd focus on the beauty and grace of the movement.  If the motion felt good, I knew the times were going to be good, too.

Can't do that anymore.  Won't be able to after seeing the doc today, either.  Maybe I'll take up rowing.

As you know if you've ever read this blog, I'm not much taken with buzz words like "Mindfulness."  It's a seller's market.  Like most things that were given freely in hippie times, people learned how to make a buck off of it.  The Maharishi Mahesh Yogi (you know him, right?) tried giving all of this to the world for free, but he looked funny, so some yuppie types took over and capitalized on it.  People, I guess, don't trust things if they are given for free.  Maybe we all value things by the dollar.

But I've practiced "Mindfulness" in one form or another for years.  And that, my friends, is why I'm so much better put together than you.

Last night, a football player had a heart attack after he made a hard tackle.  His heart just stopped.  For ten minutes, medics tried to revive him on the field.  An ambulance came and he was driven to a hospital where he survived.  Players were crying as he was carted off.  The game was discontinued.  People want to believe that the players were crying out of concern for a fallen brother, and that may be true in part.  But I contend that they were also weeping out of fear.  Pro football is not a sport.  It is a business.  Players don't do it for fun.  Pro football players know that on any play, such a thing could happen to them.  They play for money.  And they are terrified.  You do not see a safety run up, pat a receiver who just went past him for a touchdown on the ass and tell him, "Nice play."  He will try to injure the motherfucker next chance he gets.  They've made illegal many of the things that players would do to one another if they had the chance, and still injuries rule the game.

But. . . how would you know which beer to drink or truck to buy if you didn't watch football?

Capitalism has made me cynical.  I don't trust that the doc today isn't going to try to upsell me on a knee replacement.  Maybe I need it.  I don't know.  But I do know that money corrupts and doctors now work for corporations run by MBAs who have learned how to maximize profit.

But you know, it's better than what old Doc on "Gunsmoke" could do.  I'll just have to satisfy myself with that.