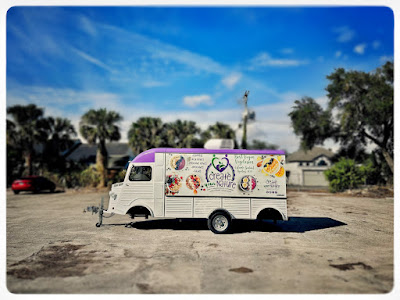 Two alcohol-free days and I've already lost twenty pounds!  It's incredible. Why hadn't I thought of this before?

But I didn't get the shakes or shivers, so there is that.  The biggest problem right now is lifestyle.  I gave Skylar a book called "Upper Bohemia" for Christmas.  I am going to admit to being poor at writing inscriptions.  I overthink them and then give up and right something bland and innocuous.  She read the book in just a couple days, however, and gave it back to me to read with a MUCH better inscription and little plums of inscriptions and doodles on the pages inside.  I started reading last night.  Oh, fuck. . . how I wanted a cocktail from the first page forward.  Alcohol for creative class of the 30's was life's blood.  Alcohol and sex and art and literature and music.  Everything that shaped my life from my teenage years onward is in those pages.

Rather. . . I sipped my ginger/tumeric tea.

I like Upper Bohemia.  I've always wanted to have been born to the upper crust, the black sheep of a good family, perhaps a remittance man.  I would have been the best remittance man in history.  My slim remittance, however, was my college tuition and living expenses for a few years.  And those were true bohemian days from which, it seems, I never recovered.  I was lucky enough to go to school in a time of transition in places where plenty of Upper Bohemians played.  I was fortunate to make friends.  Were it not for the social deconstruction of that time, I would never have known them.  However. . . this little hillbilly boy was exposed to the many wonders of life which he might never have experienced.  And that was the best part of hippie times.  All those rich kids living "off kilter," eschewing the life that was their inheritance, charming, upper crust manners dressed in third world clothing, drinking cocktails and eating omelettes around hodgepodge tables, rooms full of artifacts and books and drawings. . . .

I was more intrigued by them than I was my lefty ideological friends, though they were a big part of it all, too.  They just seemed inherently bitter by comparison, and the beer was always cheap and often out of date.

And they never made omelettes.

That world is cancelled now.  The Ideologues are having their day, both left and right.  And while liquor prices are skyrocketing as people vie for the fanciest tequilas and bourbons and scotches, there is a disdain for the kinds of freedoms practiced by the old upper left.  Dorothy Parker and Her Vicious Circle have disappeared.

In order to shake off the blues, yesterday I decided to move.  Though the morning was gray and bleak, by afternoon there were puddles of sunlight, and I, in my sad and lonely boredom, decided to chase them.  I grabbed two Rollieflex SLRs with old film in them, one black and white and one color (though I had forgotten which was which) and headed out the door.  New Year's Day was a dead zone.  Hardly any traffic, closed shops. . . just me and an open road.  I drove slowly looking to the places where the sun was shining, and when I found something photographable, I would stop.  I'd get out of the car and grab both cameras and my phone and limp to the place that gave me a nice vantage point.  I'd shoot with the phone first to get an idea of what the frame would look like, then I'd shoot with each of the Rollies.  Then I'd limp back to the car.  I didn't shoot so many frames, and none of them, I think, will satisfy me, but it was more about getting out and moving than anything else.  In the end, I think the phone pics will be my favorite.  I am seeing fewer and fewer reasons to have a camera other than for the fun of it.  If iPhones had a flip screen, the damn things would be nearly perfect.  I can see no reason why they shouldn't.

As evening approached, I went to my mother's for our New Year's Day beans and greens.  I took a couple cans of sparkling water.  Mmm.  My mother has been out of sorts lately and it scares me.  It feeds my sense of despair and gloom I so ardently wish to avoid but cannot seem to.  I stayed as long as I could as we sat out and watched the sun go down, then long after.

Back home, the house brought back feelings from the weekend.  I should have lit candles.  I should have put on music.  Rather, I made tea and read until Mr. Sandman came my way.  Hoped for opium kisses and shared dreams took me to an early bed.

I am up and at 'em early today.  The "thing" on my face is subsiding, but my knee seems worse.  I have an appointment with the ortho tomorrow to evaluate my options.  And then. . . .

The morning is gray and the weather predictions are not for sunny weather this week.  But there may be patches.  I've quoted Frank Gallagher of "Shameless" before--"Life's going to fuck you. You just have to take it up the ass and soldier on."  Frank, in his infinite egoism, however, left something out.  We make choices, and they have consequences, too.  What we choose and what was once referred to as the Life Force conspire.  But, he had one thing right.

We simply have to soldier on.