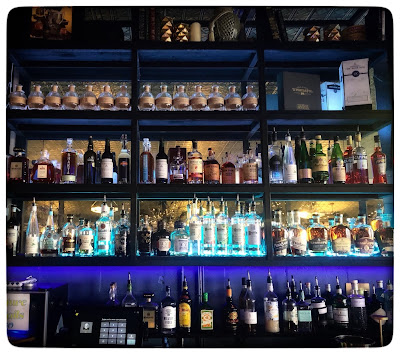 This is where I wasn't.  Happy New Year.  I know the whereabouts of some of you.  One was watching bowl games.  Another was flying home from Telluride.  Some of you were at private parties.  I know some of the gymroids were out on the town.

My cousins came into town and were spending the night with my mother.  That meant I was expected to go spend the evening with them.  Really, though?  What if I had other plans?  Of course, I didn't.  They had driven a few hours to. . . to what?  I don't know.  They drove around town, went to Costco.

"My god, Costco was a mess.  You could barely move.  And people were aggressive.  They were not polite at all. . . ."

I had the blues all day long and had not left my house.  The thing on my face turns out to be a boil, I think.  I had put something called "Black Salve" on it and bandaged it overnight.  It hurt.  Badly.  In the morning, I found all sorts of salves and creams left by the former tenant.  My drawers are a true mystery.  No matter how many times I go into them, I always find things I have no recollection of.  I found one jar labelled "Sulfur Cream" or something similar.  I Googled it.  Maybe.  Then I Googled "Black Salve."  HOLY SHIT!  The first thing that is listed is an FDA warning on the website fda.gov. 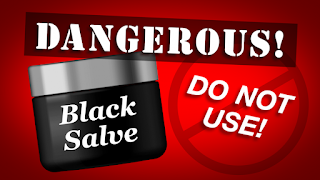 "Although not all salves are dangerous, topically applied products with the above ingredients can destroy the skin and result in permanent disfigurement, tissue necrosis (death of cells in living tissue), and can result in infection. "

Adrenaline shot through me like a lance.  Why the fuck would the feds just not make them stop selling this shit rather than simply putting out a warning?  Other sites I read told me to simply soak the thing with hot washcloths for twenty minutes three times a day.  So that is what I did.  What once looked like a red marble on my face now looks like a red bite.  But what caused this?  Oh. . . probably a staph infection the med sites said.  Most common.  Staph lives on the skin, primarily in the nose.  After my accident, I was on a strong antibiotic for months because they feared that my wounds from the car and the road had infected me with staph.  It is not something to be fooled with.  But really. . . WTF?  I read further.  Staph can enter areas that have been irritated by some types of creams.  Well, now--I bought a new face treatment "for men" that was going to make me look like a whole new person.  I've used it on the thin skin around my eyes.  Now I'm suspicious.  I spent good money on this stuff, but it is going in the garbage.  I'm going back to natural oils that I usually use.

But that was only part of my blues.  After Friday morning, Friday night, and the wee hours of Saturday morning, I was heartsick.  I'll not explain, but Skylar had left town.  I went to bed for most of the day.  When I was not in bed, I was soaking in hot Epsom Salts baths (Epsom Salts, I read, were good to soak my "thing" in, too).

Have you ever had the blues?

It was getting dark by the time I rallied myself enough to get dressed to go to dinner at my mother's.  I knew they would all be insulted that I had not come earlier, but I knew I would not be able to "unfrown myself," would not be the happy, life of the party boy they have all come to expect.

When I walked in, my cousin's husband, who has lost most of his hearing, was sitting in my mother's Lazy Boy in front of the t.v. with the volume at full throttle.  Reality t.v.  The cooking channel.  Stupid shit with forty thousand commercials.  I took a seat.  Everyone was shouting over the t.v.  We were not close to dinner.  And I had forsaken drink.  I had brought over cans of sparkling water.  I sat with a grimaced grin and nodded my head when appropriate as they talked about relatives and children and which of them wouldn't eat which foods and then about the many prescription drugs they are on, etc.

Finally, dinner was ready.  They had bought thick fillets at Costco, and they were cooked well, seared in the skillet then cooked in the oven.  Baked potatoes.  Fried mushrooms.  The steak was three inches thick, and you could cut it with a fork.  So. . . there was that.

Midway through the meal, one of my mother's neighbors came by.  She is my age and very good to my mother, but she drives me crazy.  She talks nonstop at top volume always waving her arms about, and as the conversation evolved, I found out what I had suspected, that like my cousin's husband, she is partially deaf.  She had brought over a cheap bottle of wine and some Hickory Farms cellophane wrapped box of "cheeses" and sausages.

"I found these at a little pop-up shop the other day.  Remember when Hickory Farms was in all the malls.  I always loved them.  You can't find them any more, so when I saw these. . . !"

She was excited to see the New Year's Eve special with Dolly Parton and Molly Cyrus.

By eight, dinner done, I had small talked all I could manage.  I said my knee was killing me and I needed to soak my "thing," and I got up and said goodnight.

Back home, the New Year's texts were blowing up.

I was exhausted.  I didn't want to stay up past ten.  I made some ginger tea and rented Woody Allen's latest film, "Rifkin's Festival."  I wasn't expecting much from it.  Allen, for all the good films he's made, makes some real stinkers, too.  Some are unwatchable, I think.  This film was shot in Spain.  I read that he can't get many actors to work with him in the U.S. any longer.  He is a pariah, an outcast.  The industry has turned on him like vipers.

But not in Europe.  He is still a darling there.  The film came out in 2020, but it has only come to the U.S. now.  Amazon, who had cancelled him, offered the film on rental.

It was good.  It was really good.  It is not heavy.  It is a light comedy that makes fun of many of Allen's life concerns and of many of his films.  Wallace Shawn in the lead will either repel or delight you.  I chose to be delighted.  His deliveries are among the quirkiest in cinema.  And the love stories. . . well, they might please (though I doubt anything by Allen would delight the semi-woke).  The quirky black and white tributes to classic film scenes. . . in truth, I wasn't getting every reference.  You must have studied them more than I have (which is little) to get them all.  But the significance of the parody, even in my ignorance, was not lost.

I finished the evening with a big mug of Golden Milk before heading to bed, still of heavy heart.

I woke this morning to another foggy, dreary day.  Such is life and the pathetic fallacy.  I always seem to call it the "sympathetic fallacy."  Shows you where my head is at.